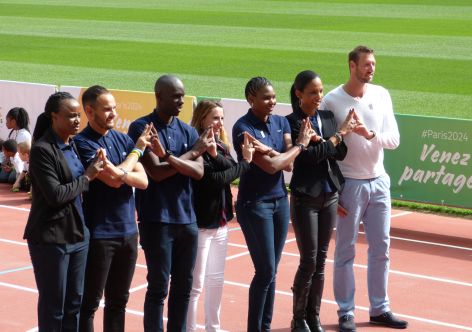 (ATR) The Paris 2024 Olympic bid let the athletes who support the project explain how each venue will be utilized if the French capital is awarded the 2024 Games.

More than 12 athletes participated in the venue tour and often led the presentations at the beginning of each new site visit. The stars included Frederick Bousquet, Stephane Diagana, Pascal Gentil, Brice Guyart and Emmeline Ndongue among others.

The venue tour comprised of nearly 200 journalists, photographers and videographers who visited the planned site for the Olympic Village, Ceremonies venue Stade de France, the Grand Palais and much more.

Police escorts were provided throughout the day to nullify traffic. The day's events began at the site for the potential Olympic village, specifically the planned main dining hall which is currently the Cite du Cinema.

The tour then moved to the proposed site for the Main Press Center, where organizers will plan to host up to 4,000 accredited journalists in the Le Bourget Paris complex.

Media attention in each venue coincided with IOC tour throughout the city just once at the Stade de France. While there, IOC evaluation commission chairman Patrick Baumann and his fellow members watched an athletics display from children. Baumann and bid leader Tony Estanguet even joined the fun and sprinted down the home stretch of the track with two children.

Formal presentations with slide shows or schematic displays and renderings greeted media at each stop. The tour also included a boat ride on the Seine.