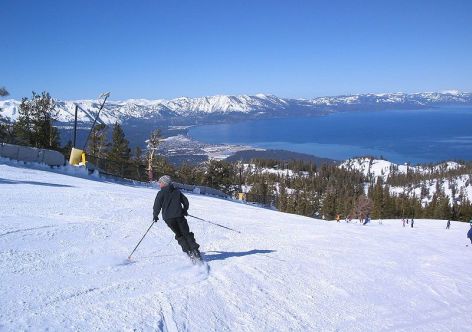 (ATR) Losing out on the chance to bid for the 2030 Winter Olympics may prove to be a blessing in disguise for Reno-Tahoe, says Jon Killoran.

Killoran helped lead a potential Reno-Tahoe bid through the accelerated process put forth by the United States Olympic Committee to select a future Winter Olympics bid city. It is expected that the USOC will bid for the 2030 Games.

Reno-Tahoe dropped out of the process before the USOC conducted site visits, leaving only Denver and Salt Lake City for consideration. Salt Lake City was eventually chosen as the future bid city.

Financial constraints caused by the Los Angeles 2028 marketing agreement with the USOC made it impossible for Reno-Tahoe to be considered for a 2030 Winter Olympics bid, Killoran said.

"We could not answer that question now, specifically, saying we can guarantee saying we will have ‘x’ number of dollars in the bank," Killoran said to Around the Rings. "We felt it wasn’t prudent for us to continue."

Without an Olympic bid to focus on, Killoran said the Reno Tahoe Winter Games Coalition decided to rebrand itself to broaden its mission of bringing high-level sporting events to the area. Now, the group will be called Sports Nevada USA.

Evidence of the group’s expansion is the return of the World Curling Continental Cup to Las Vegas, in southern Nevada. Las Vegas will host the event for the fourth time in the last six editions. Las Vegas also hosted the 2018 Men's Curling World Championships.

"For us, the rebrand has been in the making all along," Killoran said. "I think those who envisioned the coalition in 2003 envisioned a short number of years before an Olympic bid would be successful and then move from there.

"Organizations like ours when created are not necessarily made to last the test of 15 years [which is] what we have done so far."

Focusing only on building the profile of Winter Olympic events in the Reno area would serve the need for any potential Olympic bid, but would not help grow the profile of events in the state in general. Now, the group can work just as hard to bring events to other areas of the state, in all seasons, which brings revenue and credibility.

Discussions are already underway to try and bring top-level cycling events to the Reno area, and "identifying what works well in our region," Killoran said.

The group will work to leverage the sporting profile Las Vegas has carved for itself over the last decade in American sports. In 2017 the National Hockey League became the first major professional sports league to bring a team to the city with the Vegas Golden Knights. Construction of a 65,000 seat American football stadium is nearing completion and a National Football League franchise will relocate to Las Vegas for the 2020 season.

A ruling by the Supreme Court of the United States recently paved the way for legalization of sports betting across the country. Previously, Nevada was the only state where such activities were legal, which limited its professional sports landscape because the leagues did not want to be associated with gambling. With the new ruling, Killoran says Nevada can once again pursue collegiate sports championships.

Another partnership being considered is with organizers for the Los Angeles 2028 Summer Olympics. Both Reno and Las Vegas are close enough to Los Angeles that pre-Games training camps could easily be held in the state’s sports facilities.

"When the organization was created it was Reno-Tahoe-centric organization," Killoran said. "But as we started bringing events into Las Vegas and other opportunities down there it became much more apparent we were going much more statewide and we felt the need to have a branding game that reflected that."