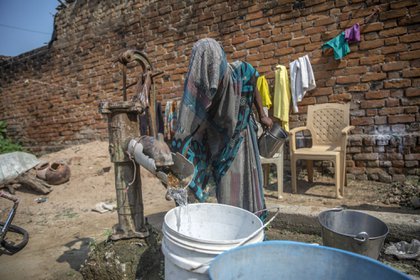 A woman collects water from a pump at a village in Banda District, Uttar Pradesh, India, on Sunday, Oct. 11, 2020. Covid-19 is exposing India's big divides, like access to quality health care, proper sanitation and who gets to eat, and who doesn't. Even before the lockdowns, roughly three-quarters of the population (more than 1 billion people) couldn't afford a healthy diet.

(Bloomberg) -- India plans to spend 3 trillion rupees ($41 billion) to ensure tap water is delivered to every household in the next five years, people with knowledge of the matter said.