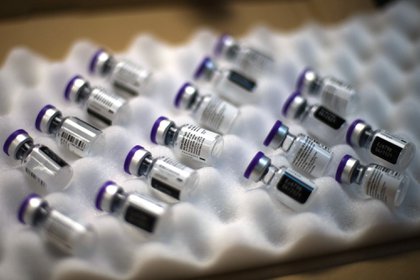 Vials of Pfizer-BioNTech Covid-19 vaccines after delivery to the Ambroise Pare Clinic in Paris, France, on Wednesday, Jan. 6, 2021. The French government is trying to make up for a slow start to its Covid-19 vaccination program after criticism from doctors and opposition politicians. Photographer: Nathan Laine/Bloomberg

(Bloomberg) -- European Union regulators proposed stricter curbs on travel and will demand that drug companies register coronavirus vaccine exports in advance, as the bloc tightens rules to combat the pandemic.

The European Commission recommended on Monday that even people visiting the EU for essential reasons be required to show a negative Covid-19 test taken at the earliest 72 hours before departure.

Separately, the bloc’s executive arm will initiate a “transparency scheme” in the coming days, an EU official said. Under the plan, companies will have to notify authorities about plans to export vaccines from facilities in the EU to other countries.

The new proposals, due to be discussed by EU governments, come amid concerns about delays in the rollout of coronavirus vaccines by drugmakers including Pfizer Inc. and AstraZeneca Plc. The EU lags behind both the U.S. and the U.K. in terms of doses administered as a share of its population.

In mid-January, Pfizer announced a production disruption at a factory in Belgium that reduced vaccine deliveries to member countries last week. And last Friday, AstraZeneca -- which may get EU approval for its shot later this week -- announced delays in deliveries to the continent.

“She made it clear that she expects AstraZeneca to deliver on the contractual arrangements,” spokesman Eric Mamer told reporters in Brussels. The commission last year signed an advance purchase agreement with the company for as many as 400 million doses.

A spokesperson for AstraZeneca said Soriot was “pleased” to speak to von der Leyen and he “stressed the importance of working in partnership and how AstraZeneca is doing everything it can to bring its vaccine to millions of Europeans as soon as possible.”

Countries across the bloc have prolonged recession-inducing lockdowns to tame the spread of the illness. The commission said on Monday that interventions such as stay-at-home measures and the temporary closing of certain businesses must be maintained and in some cases reinforced, while all non-essential travel must stop.

For arrivals from countries where a worrying mutation of the virus has been detected, the commission said member states should systematically set obligations such as self-isolation, quarantine and contact tracing for as many as 14 days. In addition, it said people arriving from outside the 27-nation EU should submit a passenger-locator form.

The EU already discourages non-essential visits by residents of all other countries except eight -- a travel “white list” that was created last year and that gets reviewed about every two weeks.