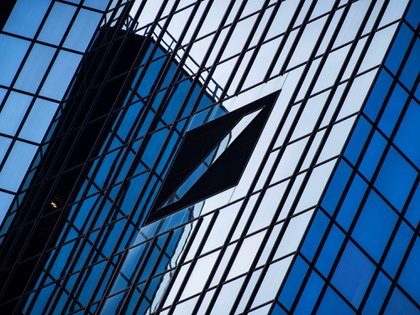 FRANKFURT AM MAIN, GERMANY - SEPTEMBER 22: The headquarters of Deutsche Bank pictured on September 22, 2020 in Frankfurt, Germany. According to recent media reports Deutsche Bank has been linked to large-scale, criminal money laundering through the so-called FinCEN files. The files, which are reports of suspicious activity filed by banks with a U.S. regulator, show Deutsche Bank executives, including current CEO Christian Sewing and Chairman Paul Achleitner, were informed of vulnerabilities at Deutsche over the laundering of billions of dollars through its Moscow office on behalf of criminal enterprises. Deutsche Bank had previously blamed the scandal on mid-level management in the Moscow office. The leaked FinCEN files point to money laundering by several global banks, including Deutsche Bank, HSBC, JP Morgan and Barclays. (Photo by Thomas Lohnes/Getty Images)

(Bloomberg) -- Deutsche Bank AG supervisory board member Alexander Schuetz disposed of his stake in Germany’s biggest lender in December, according to his spokesperson.

Schuetz is co-founder and chief executive officer of C-Quadrat, the Austrian asset management firm that oversaw HNA Group Co.’s investment in Deutsche Bank. Schuetz joined the German lender’s supervisory board in 2017 and when HNA decided to exit, Schuetz bought its remaining stake.

HNA was once one of Deutsche Bank’s largest investors, and had a series of complex financing and derivative positions tied to the stake.

Schuetz has faced scrutiny for a 2019 email exchange with Wirecard AG’s former chief executive Markus Braun that became public this month. Schuetz had told Braun to “finish” the Financial Times, which had published a series of articles alleging irregularities at the payments company.

After the exchange was disclosed in a parliamentary investigation of the Wirecard scandal, Deutsche Bank took the unusual step of publicly rebuking Schuetz, calling the emails unacceptable in tone and content.