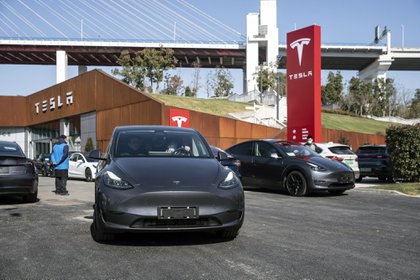 A customer and a sales assistant sit inside a Tesla Inc. Model Y electric vehicle during a test drive at the automaker's showroom in Shanghai, China, on Friday, Jan. 8, 2021. Tesla customers in China wanting to get the new locally made Model Y are facing a longer wait, signaling strong initial demand for the Shanghai-built SUV. Photographer: Qilai Shen/Bloomberg

(Bloomberg) -- Tesla Inc.’s dizzying surge through 2020 showcased an investor craze for snapping up shares of the company and not in buying its cars, David Einhorn‘s Greenlight Capital said in a letter to investors on Thursday.

“The fad is in owning Tesla stock,” according to the fund’s fourth-quarter letter seen by Bloomberg News. Tesla cars “are not a fad; if they were, Tesla would sell many more than it does,” the letter said.

Tesla shares were slightly lower to $846.90 Thursday after having surged more than 900% since the start of 2020. That compares to a 19% rise for the S&P 500. Greenlight’s portfolio was hammered by losses in betting against Elon Musk’s automaker throughout 2020 with the position marking its largest loser.

Greenlight calls out the stock’s rally and its more than $800 billion valuation as “silly,” highlighting that in the 2000 internet bubble Cisco Systems Inc. maxed out at 29 times revenue, which is a discount to Tesla’s current level.

As a result of the stock’s 2020 boom, Greenlight underwent efforts to “sidestep most of the significant second-half rally” for shares ahead of its inclusion in the S&P 500, the letter said.

Greenlight’s success through the final three months of 2020 -- the fund returned 25% in the fourth-quarter -- allowed it to net a 5.2% return for the year. That gain markedly lagged an 18% return for the broader S&P 500 over the year.

Other highlights from the letter: