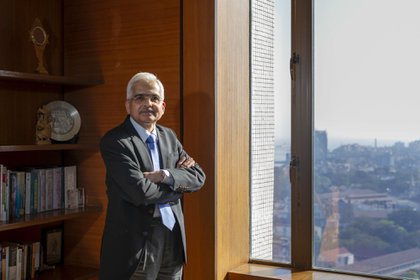 (Bloomberg) -- Emerging markets need to build foreign-exchange reserves as buffers against external shocks even at the risk of being added to the U.S. Treasury Department’s watchlist for currency manipulation, Reserve Bank of India Governor Shaktikanta Das said.

Das’s comment during a speech Saturday comes a month after the Treasury Department added the South Asian nation to the watchlist citing India’s “significant” goods trade surplus with the U.S. and “sustained” net currency purchases through the year to June.

India’s rupee was Asia’s worst performer last year, as the central bank countered relentless foreign investment inflows with dollar purchases that have pushed the country’s reserves to a record $586 billion. That’s catching up with Russia, which has the world’s fourth-largest stockpile.

In his speech the governor also stressed on the need to fast-track boosting capital buffers at Indian lenders and strengthen risk management systems.

RBI’s thrust is looking for “root causes of vulnerabilities rather than symptoms,” Das said during a memorial lecture on ‘Towards a stable financial system.’

The RBI warned that stress in the banking system could increase once it withdraws special measures aimed at improving the flow of funds to cash-strapped firms, it said earlier this month. The central bank also said it forecasts non-performing assets will rise to 13.5% of total advances by the end of September, one of the highest levels among major economies, from 7.5% a year ago.

Indian lenders came into the pandemic already weakened by a two-yearlong shadow banking crisis that worsened their asset quality, slowed credit growth and eroded capital. The outbreak of the coronavirus followed by one of the world’s strictest lockdowns have led to millions of job losses and the closure of businesses.

Read about the RBI’s assurance to bankers on stance

In response, the RBI has taken unprecedented steps, including a loan repayment moratorium that ended in August, followed by a two-year debt restructuring program. But the measures have made it difficult to assess the extent of the bad loan problem.