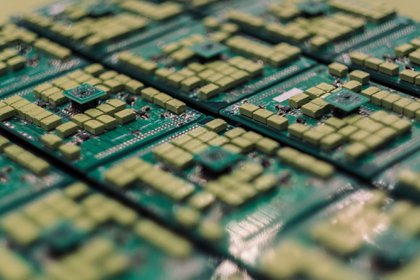 Semiconductor chips are on display at the Semicon Taiwan exhibition show in Taipei, Taiwan, on Wednesday, Sept. 5, 2018. The show runs through to Sept. 7. Photographer: Billy H.C. Kwok/Bloomberg

(Bloomberg) -- Achronix Semiconductor Corp. is in talks to go public through a merger with the blank-check company ACE Convergence Acquisition Corp., according to people with knowledge of the matter.

ACE, a special purpose acquisition company, or SPAC, has begun discussions with investors about raising new equity to support the transaction, the people said. The deal is slated to give the combined entity an equity valuation of about $2 billion, said the people, who asked not to be identified as the information is private.

Santa Clara, California-based Achronix, founded in 2004 and led by Chief Executive Officer Robert Blake, makes field programmable gate arrays, or FPGAs, a type of chip that’s unique because its function can be altered by software, even after it’s been installed in a device. Other major FPGA suppliers include Intel Corp. and Xilinx Inc., which has a pending deal to be acquired by Advanced Micro Devices Inc.

ACE, backed by ACE Equity Partners LLC and led by Behrooz Abdi, the former CEO of chipmaker InvenSense Inc., raised $230 million in its initial public offering in July. It has said it’s seeking to acquire a company in the infrastructure software or hardware space.