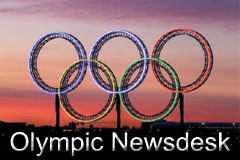 "All initiatives are part of the restructuring that begun in June, as the new stage of preparation after the London 2012 Games," Rio 2016 president Carlos Nuzman said in a statement.

"Leonardo Gryner has long Olympic experience, having been involved in all Olympic Summer Games since 1976, and having been part of the Rio 2016 bid, and therefore has all the credentials to lead all operational areas of the Games."

Levy added: "I would like to thank Carlos Nuzman for the opportunity he has given and Leonardo Gryner for the warm welcome. I am sure that I will have lots to learn from their long experience in the Olympic Movement and I will bring my experience from the corporate world, which I hope will contribute to the success of one of the most important projects in the history of this country. Participating in this Olympic journey will no doubt be a unique opportunity in my working life."

Levy doesn't actually start at Rio 2016 until Jan. 1 but will take part in the London debrief beginning next week.

No word yet on the fate of former COO Marco Aurélio Costa Vieira, who took over in July from Roderlei Generali afterGeneralispent just one year on the job.

"The test came out positive – it's a fact and now we must wait for the official statement."

Pishchalnikova, who won gold at the 2011 World Athletics Championships in Daegu and silver at the 2012 Olympics in London, insists she’s innocent and has requested her B sample be analyzed.

She already served a suspension of almost three years after manipulating tests before the Beijing Olympics along with six other top Russians.

"In practice, an athlete who commits a second offence involving (anabolic steroids) could face from eight years to a life ban," said Kamayev.

"As for the Olympic silver medal, it depends when her suspension would start if she was found guilty this time."

Pishchalnikova also won silver at the 2009 World Athletics Championships, a medal stripped from her when the IAAF voided all her results from May 2007.

Another Airline for Tokyo 2020

Japan Airlines joins Tokyo 2020 as its seventh bid partner – and second from the airline sector.

A month after All Nippon Airways signed on as its sixth sponsor, Tokyo 2020 announced Friday that Japan Airlines will follow suit.

"The JAL group will utilize both its domestic and international networks to the fullest in various areas, such as specially painted aircrafts, airline magazines and airline videos, in order to realize the goal of hosting the 2020 Olympic and Paralympic Games in Tokyo," said Yoshiharu Ueki , JAL Representative Director and President.

JAL is also the official airline of the Japanese Olympic Committee dating back to Nagano 1998.

JOC VP and Tokyo 2020 CEO Masato Mizuno said: "JAL has enthusiastically agreed to help promote our campaign on behalf of this marvelous city. We are grateful for JAL’s support, and I look forward to working closely with them and other forthcoming partners."

Indian Out, Algeria In for WSB

After welcoming a new chief operating officer on Monday, WSB announced Thursday its expansion into Algeria, then revealed less than 24 hours later that its Indian franchise would be taking a hiatus.

"After Argentina, Ukraine, Poland and Great Britain, I am extremely pleased to welcome another new franchise to World Series of Boxing Season III, especially one from a continent that has not yet tasted WSB," said AIBA president C.K. Wu.

WSB returns to the ring Nov. 15 with six franchises in Europe, three in the Americas and – thanks to these changes – one in Africa but just two across Asia.

"India needs time to devise a development program to educate and prepare its boxers for professional style boxing so they can compete competitively at the highest level," added Wu, also chairman of the WSB Board.

"We look forward to seeing the India Fighters achieve success in WSB."

Voting ends Sundayfor the inaugural Sports Cities Index, presented by Around the Rings and TSE Consulting.

Results of the first survey will be released Nov. 16 at the City Events Conference in Lausanne, Switzerland. Around the Rings subscribers will have results delivered via email at 5 p.m. ET on Nov. 15.

ABC News unveils some of the secrets behind Queen Elizabeth II’s apparent entrance by parachute into the opening ceremony of the 2012 Olympics.