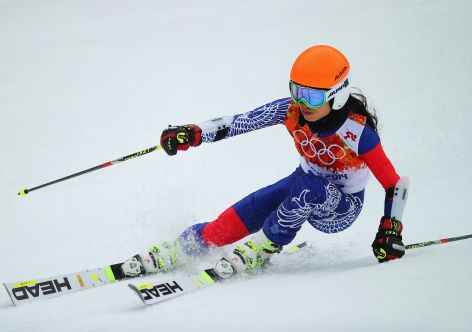 (ATR)Vanessa Vanakorn is no longer banned from competing in international ski events.

However, the Court of Arbitration for Sport has confirmed the 36-year-old pop violinist, who also goes by the stage name Vanessa Mae, was not eligible to compete at the 2014 Sochi Olympics.

On Tuesday, CAS annulled the four-year ban enforced on the Olympic skier in Nov. of last year by the International Ski Federation (FIS).

At the time, FIS banned Maefor helping rig races that allowed her to qualify for the 2014 Sochi Olympics.

A FIS panel "found to its comfortable satisfaction that the results of the four ladies giant slalom races that took place on 18 and 19 Jan. at Krvavec were manipulated."

The scam included adjusting times, inventing skiers who did not race and failure to change the second runs as is required under FIS rules.

The competitions were organized at the request of the management of Vanessa Vanakorn - the name Mae took from her Thai father - through the Thai Olympic Committee. The Krvavec competitions were the last opportunity for her to achieve the necessary FIS points to qualify for the Sochi Olympics.

CAS confirmed the FIS panel's findings in its ruling on Tuesday, saying the Krvavec competitions "were so defective that theirresults and qualification points gained therefrom could not stand."

FIS, according to CAS, acted within the parameters of the federation's Betting and other Anti-CorruptionViolations Rules when it cancelled the results of the giant slalom races inKrvavec.

Consequently, this confirms that while Mae herself was not guilty of any manipulation, she was ineligible to compete at the Sochi Games.

Mae raced for Thailand as Vanessa Vanakorn at Sochi 2014 and finished last of the 67 competitors in the giant slalom.

FIS also banned four skiing officials from Slovenia and another from Italy for between one and two years for their involvement in the scam.