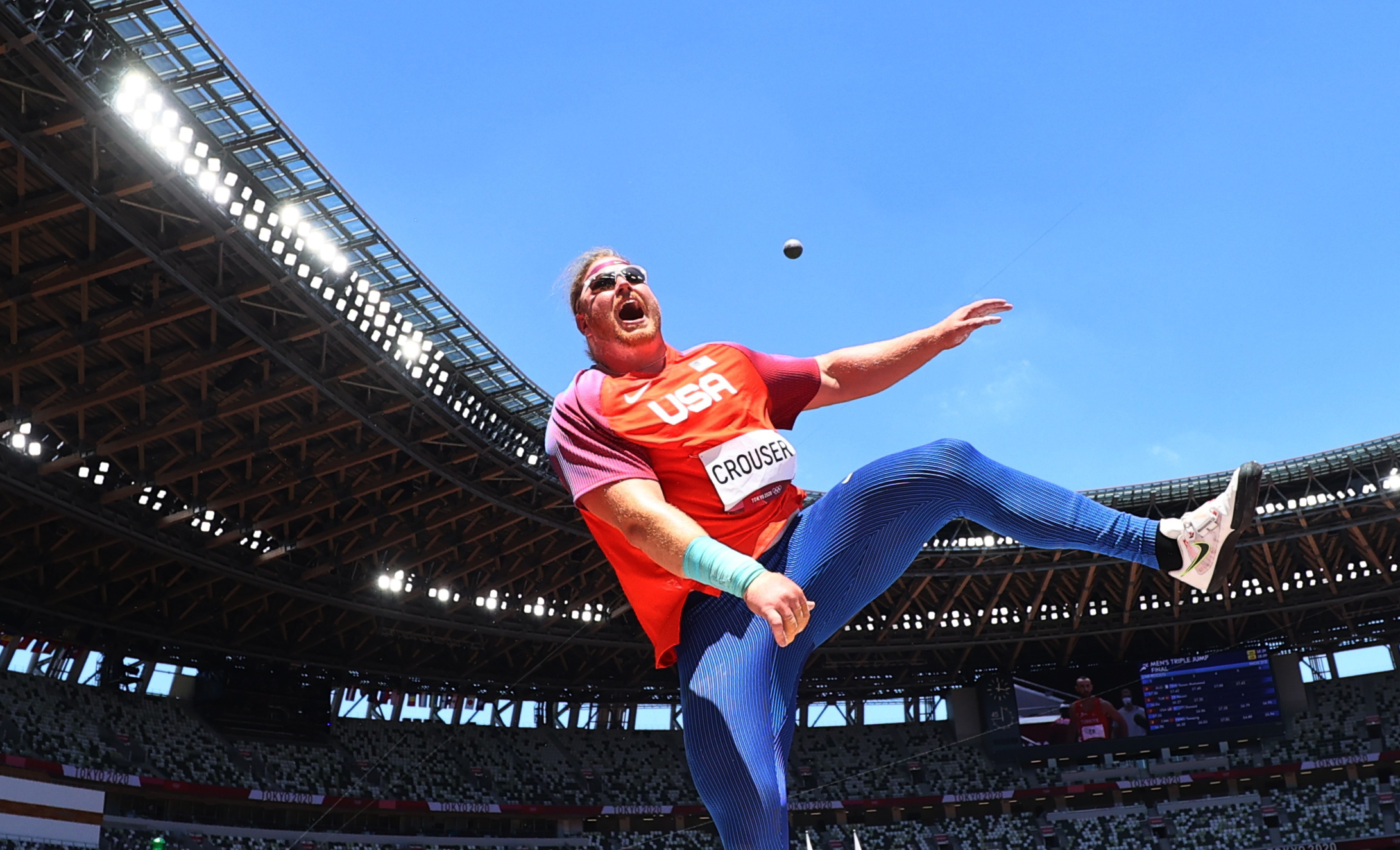 Six-foot, seven-inch, 320-pound Ryan Crouser is a beast in the shot put ring, but a gentle giant outside of it.

The Rio 2016 shot put champion defended his title as he smashed his own Olympic record of 22.52m, with a colossal toss of 23.30m at Tokyo Olympic Stadium on Thursday. Five of Crouser’s six heaves would have also secured the gold medal.

After his victory, an emotional Crouser held up a sign to a TV camera that read: “Grandpa, We Did It, 2020 Olympic Champion”.

“He passed away the day before I travelled to Tokyo, so just over a week ago,” Crouser said about his grandfather. “I was probably about this (holds hand low to ground) tall when I took my first throw with him in his backyard. He got me started throwing, and I threw in his yard until eighth grade,” said the Oregon native. 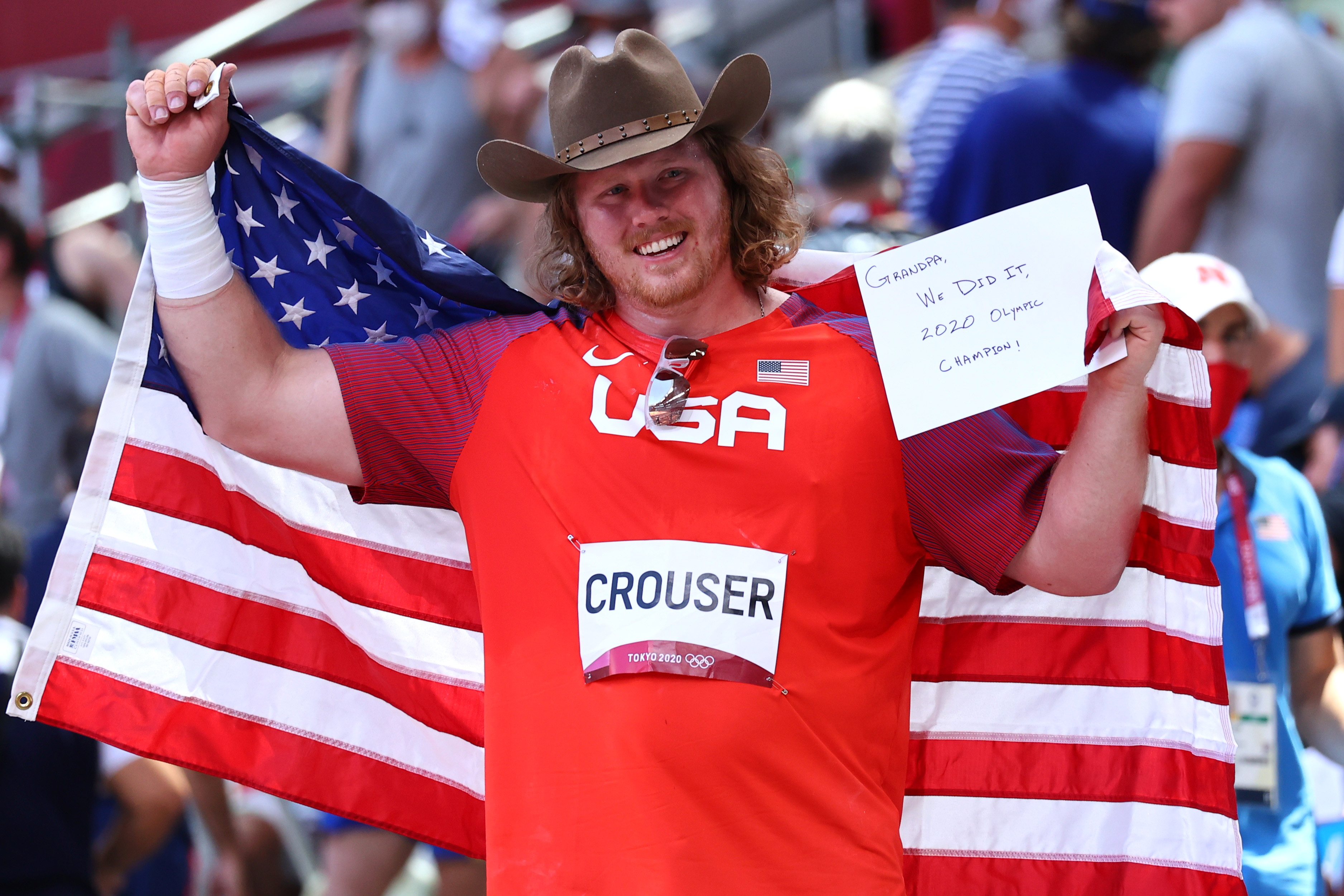 “The day before I had to leave I threw a shot, and it went right through the roof of his garden shed, so I had to go back the next day and replace that,” said the 28-year-old Olympic champion.

“He played a huge role in my throwing career,” Crouser continued about his grandfather. “So to lose him the week before coming to the Olympics, obviously was sad, but I feel like he was able to be here in spirit.”

“I sat with him for a few hours after the (U.S.) trials and was able to tell him I was the world record holder. And he watched that throw on the iPad thousands and thousands of times,” Crouser said of his grandfather.

“So I just felt like that was the last note that I wanted to write to him, that I didn’t get the chance to. I know he was here with me in spirit, and I know he would be proud if he was here.”

Crouser strung together an unprecedented series of monster tosses, including the sixth round best effort that fell just 7cm short of his own world record of 23.37m. His opening throw of 22.83m sent a strong message to his competitors, also a mark that would have taken gold.

The veteran American track and field athlete displayed his might, ultimately winning the event by 65cm over his U.S. teammate and rival Joe Kovacs, 32, who defeated Crouser at the 2019 world championship in Doha on a dramatic final throw. Kovacs took silver with his top effort of 22.65m. 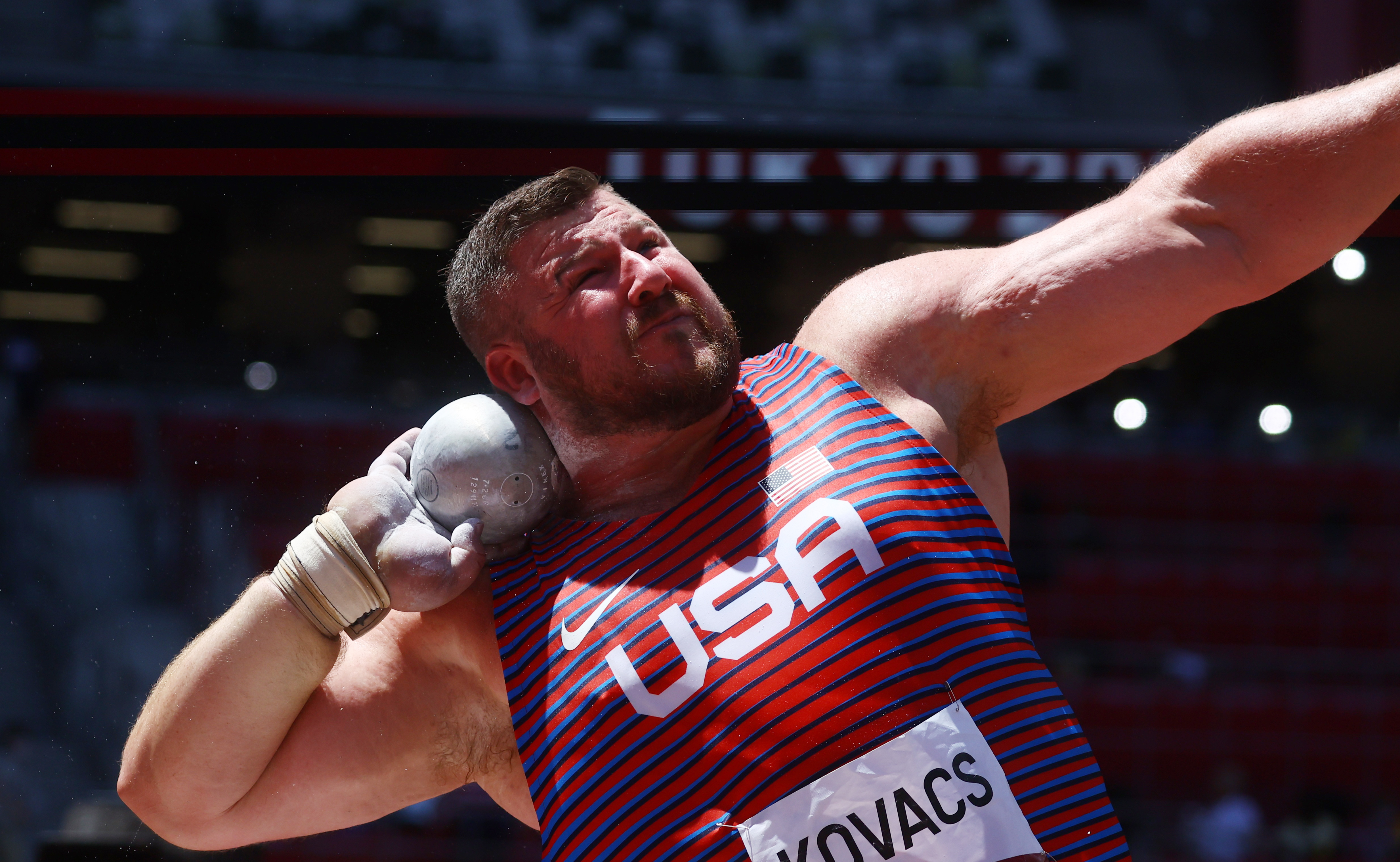 “We knew it would be a long competition and we knew it would be hot,” Crouser said. “The key was getting a big one (throw) early. I managed to do that. I had solidified the win by the end so I got a little more aggressive and chased that bigger throw and finally connected with it (Olympic record, 23.30m).

“Ryan brings it every time,” said Kovacs, the 2019 world champion. “There’s not going to be an easy day, which pushes me to be better. I know I have to be ready.”

“I’m really happy – of course you always wanna come back with all the gold, but I had one of my best throws of all time,” Kovacs said. “It feels like a privilege and an honor to come back with a medal – we’ve got to keep this tradition going because the American shot putters are the best in the world.”

Crouser celebrated his victory donning an American cowboy hat and draped in the U.S. flag.

Athletics has certainly been a family affair for the two-time Olympic shot put champion as his father Mitch, was an alternate on the 1984 U.S. Olympic Team in the discus and his Uncle, Brian, is also a two-time Olympian, having competed at the 1988 and 1992 Olympics.