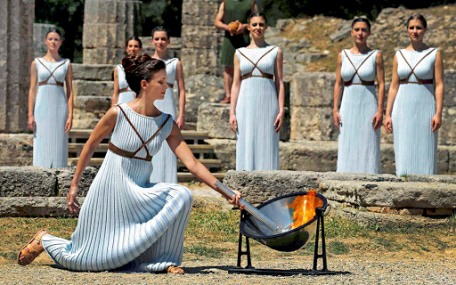 Greek actress Katerina Lehou , playing the role of High Priestess, lights a torch from the sun's rays reflected in a parabolic mirror during the dress rehearsal for the Olympic flame lighting ceremony for the Rio 2016 Olympic Games at the site of ancient Olympia in Greece, April 20, 2016. REUTERS/Yannis Behrakis

(ATR) As sure a signal as possible that the 2020 Olympics in Tokyo will go on despite the coronavirus happens March 12 with the ceremonial lighting of the flame.

But while the lighting will go on, there will be little that is normal surrounding the event itself.

This week the crowds in Olympia -- which can reach into the thousands -- will be absent. No spectators will be allowed for either the March 11 dress rehearsal or the actual lighting ceremony.

Receptions and lunches have been cancelled.

Sunny weather is predicted for March 12, ideal for a lighting using a parabolic mirror that harnesses the rays of the sun,

Shortly after midday in Ancient Olympia, the first runner of the torch relay that ends months later in Tokyo will hand off the flame to the second runner. The inexorable long march toward Tokyo will begin, a daily reminder more powerful than the pages of a calendar that the Games are coming, regardless of the threat posed today by corona.

The relay will nonetheless also be adapted to the threat with smaller ceremonies in Greece and reductions to the scale of events in Japan. Even so, 10,000 runners are plugged in to carry the flame across the host nation to the July 24 opening ceremony.

A group of 140 school children will not make the trip from Japan to Athens, Greece for the March 19 handover ceremony for the flame, as once had been planned. The precaution against corona will also be applied on March 20 when the flame arrives in Japan, with no children or public attendance. The Japanese relay officially begins March 26 in Fukushima, a region still recovering from the 2011 earthquake.

IOC leaders and Tokyo 2020 insist that the Olympic and Paralympic Games will go on as planned. Since 1936 the torch relay has been an indelible prelude to the Games. It has never been cancelled once the flame is ignited.