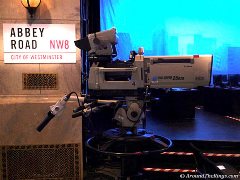 (ATR) With one month to go until London 2012, NBC unveils its most ambitious Olympic programming ever.

Mark Lazarus, chairman of NBC Sports Group, said a total of more than seven months of coverage will be shown on NBC properties during the Games, including a 3-D channel and what he believes to be "the biggest digital event of all time."

NBC plans to air each sport live at some point in the Olympics either online or on television. Its TV coverage will "crescendo" with its primetime broadcast, Lazarus said. More than 272 hours of live coverage will be shown on NBC television networks. That is the most ever for any Olympic broadcaster, NBC claims.

"In Beijing, the stars aligned for us in a very nice way with time periods, with stars being built and rivalries," Lazarus said.

"That’s happening again. We have a big sense of optimism that we will have a strong team and that we will be embraced by the American people."

Of course, no broadcast would be successful without on-air talent, and Lazarus called the NBC hosts "the Mount Rushmore of broadcasting." Olympics veteran Bob Costas will anchor the team. These will be his 10th Games.

When asked about what mark he hopes to leave on NBC Olympic broadcasting after London, Lazarus insisted he has no individual target, instead saying his only goal is for U.S. viewers to be entertained by NBC.

"My job is to help steward this enormous team," he said.

"We will be measured by the success of the Games. I don’t have an individual goal on the mark I leave on the Games. We want to come out of this with the sense that the viewing population of America says ‘that was a fun two weeks, I can’t wait to do it again.’"

In Beijing, 27.7 million Americans tuned into NBC’s primetime broadcasts. Lazarus said his network is unlikely to match those ratings in London.

"I would love to match those numbers, but I think that’s an unlikely scenario," he said.

Seth Winter, Executive Vice President, Sales and Marketing for NBC Sports notes there are positive signs for NBC’s financials ahead of London.

He declined to give specifics about how many ads have been sold.

"There’s a lot of interest, I wouldn’t say more or less than Beijing. We’re pleased because we go into the Olympics with certain projections. If we hit them and exceed them, it makes me happy because I stay employed for another week or so. The Games are well beyond our reasonable expectations," he said.

Lazarus added: "We don’t necessarily expect that these will be profitable. We do know that we will have an improved financial position over the plan that was inherited at the time of the merger over a year ago. We are very optimistic."

Business costs in London are higher than in most cities, Lazarus noted, which adds to the financial challenge for NBC.

To help cut down on costs, NBC is re-using a strategy from Beijing, keeping staff in New York City to prepare highlights and other show packaging.

Gary Zenkel, President of NBC Olympics said around 700 employees will work in the New York headquarters while "roughly 2,800 credentialed employees" will work in London.

The plan, he noted, was agreed to by the IOC when NBC secured its rights contract in 2003. Both sides said it was important to reduce the number of staff coming for the Games.

Steve Burke, CEO of NBC/Universal, says securing the Games through 2020 was a major accomplishment for the network.

He said the eight-year cycle of the Games gives NBC the best opportunity to showcase its new technologies and platforms going forward.

Combine that with how closely linked the Games are to NBC, and he said the Olympics are the most important part of NBC.

"For a whole variety of reasons they’re very very much tied up with the brand of NBC, the soul of the company, the culture of the company," said Burke.

"There’s nothing more important to us than the Olympics. We’re really excited about the calculus we went through and the bet we made. [Bidding for the Olympic broadcast rights] was a very long-term $4 billion dollar bet, but I think we’re very pleased we made it and feel it’s got a very high chance to pay off."

Executives hinted that NBC is already putting plans in place for the 2014 and 2016 Olympics in Sochi and Rio de Janeiro respectively.

NBC’s primetime coverage focuses on athletics, beach volleyball, gymnastics and swimming. Lazarus tells Around the Ringsothers could join the stable.

"2016, when golf and rugby come in, there’s chances for those two to emerge into that. The fans vote. What they watch we think should go to primetime when the most people get to see it. If something else emerges you will certainly see it," he said.

The Olympic Flame will be lit in Sochi just 18 months after London, and NBC is already preparing, Lazarus said.

"We’ve already been there multiple times. We already have a preliminary programming schedule. We work closely with the IOC and International Federations.

"We’ll take two weeks off to focus on the Olympic Games in London, but we’re working on Sochi now and even some preliminary discussions around Rio."

In the meantime, NBC is capitalizing off the rivalry of Michael Phelps and Ryan Lochte, both U.S. swimmers who could win multiple medals in London. Lazarus said he has no doubt that some new rivalry will emerge before 2016.

"That’s the beauty of sports and especially the Olympic Games," he said. "I would never predict that there won’t be another important and interesting story line."