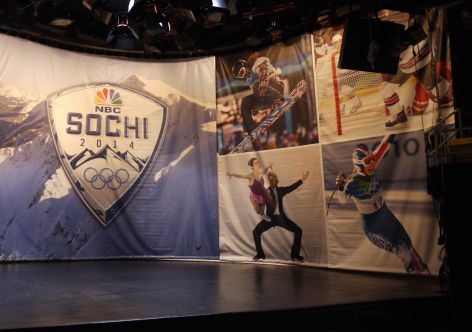 Social issues and the injury to American skier Lindsey Vonn were foremost on Tuesday as a host of NBC executives and on-air personalities met with media in New York City to mark 30 days until the Sochi Winter Games.

Speaking in Studio 8H, the home of Saturday Night Live, an array of NBC’s top voices discussed plans for providing "the most comprehensive coverage the Winter Olympics have ever had," according the NBC Sports Group chairman Mark Lazarus, despite the security and human rights concerns surrounding the host country.

"It remains to be seen how it will play out," said Lazarus. "We don’t know what will happen in Sochi. We will cover anything that takes place.

"It’s part of our responsibility."

Lazarus went on to note that a full complement of NBC News personnel will be included among the 2,700 staffers the broadcast giant will have in Sochi.

On-air host Bob Costas, who will be covering his 11th Games, said the circumstances can not be ignored.

"Framing those issues is part of the backdrop," said Costas. "It’s like describing the weather at a ballgame."

He also said the attention paid to recent terrorist attacks, as well as Russia’s intolerance of its gay community, has "increased awareness of the Games."

Costas also took a moment to clarify a recent comment he made for which he took some criticism. The host recently said in an interview that he would rather interview Putin about the issues than make his own comment, leading some to believe he was evading the issue or not condemning the country’s strongly enough.

His explanation was simple, however.

"Wouldn’t you rather hear it straight from the horse’s mouth?," said Costas.

Though NBC executives said Lindsey Vonn will be missed in Sochi, they said they’re already poised to "look for the next story."

Vonn announced on Tuesday that she will miss the Winter Games after re-tearing the ACL in her right knee in November. She attempted to rehab, but the knee has proven too unstable to compete at an Olympic level.

NBC executives pointed out that while Vonn won two medals in Vancouver, those were a small fraction of the 37 medals won overall by the United States team.

"One or two athletes do not make a difference" regarding the scope of the coverage, said Lazarus. He said other American athletes, like speedskater Shani Davis, ski racer Ted Ligety, snowboarder Shaun White, and the U.S. men’s ice hockey team, mean there will still be an abundance of star power in Sochi.

"Stars exist, but stars are more often made and born" during the Games, according to NBC Olympics president Gary Zenkel.

When asked whether Vonn might have a place as an on-air analyst, Lazarus said the time is not appropriate to reach out to her, but that he would "welcome that discussion."

No Stream for Opening Ceremony

NBC mentioned several times that all events in Sochi will be available as live streams online to American viewers with one notable exception: the Opening Ceremony.

"We think it’s very important to package that program with context," said Lazarus, calling it more of a "pageant" and a "theatre show" than a sporting event in its portrayal of Russian history and culture.

Talk show hosts Matt Lauer and Meredith Vieira will anchor the coverage. NBC plans to release clips the day of the ceremony - "We won’t ignore it," said Lazarus - but American viewers will have to wait until prime time on Friday, February 7 for the full show.

"It’s taking some real risks," said NBC Olympics executive producer Jim Bell of the ceremony. "It’s providing a window into what is still, for many, a foreign land."

The Closing Ceremony, on the other hand, will likely be streamed, as it was in 2012. However, no official decision have been made.

Two-time Olympic medalist figure skater Nancy Kerrigan will be part of NBC’s Games coverage, it was announced on Tuesday, in addition to taking part in a retrospective on the event leading up to her performance in Lillehammer in 1994.

Kerrigan, who was famously clubbed in the knee by an associate of rival skater Tonya Harding during the run up to the 1994 Games, is taking part in a project for which NBC has pushed for a long time.

"It took years to convince Nancy to say yes," said NBC host Mary Carrillo of the retrospective, referring to herself as a "pest" in her pursuit of the piece.

Kerrigan, who will provide commentary for the network, explained by saying that the attack is "not something you celebrate."

Written and reported by Nick Devlin in New York