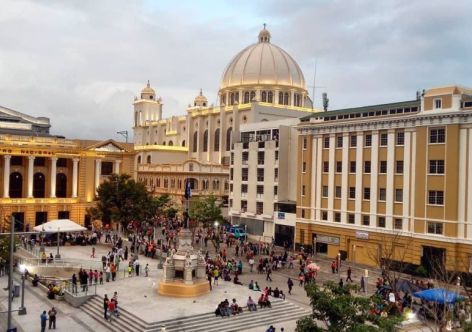 (ATR) The president of Centro Caribe Sports, Dominican Luis Mejía Oviedo, will travel to San Salvador next week, one of the two candidates to host the XXIV Central American and Caribbean Games.

Mejía revealed to Around the Rings that the visit will be April 14 and 15 and would include meetings with sports and Olympic representatives and a tour of sports facilities. The program will be similar to the one a month ago in Mayaguez. The Puerto Rican city is the other bidder for the oldest regional games in the world, founded in Mexico in 1926.

A meeting with the President of El Salvador, Nayib Bukele, is expected to highlight the agenda.

Despite the serious epidemiological situation in the region, CCS decided to go for the face-to-face inspection of both candidate cities in order to best determine the viability of the two suitors.

CCS also seeks to obtain from the main authorities the guarantee of the formal commitment to organize the Games. San Salvador and Mayaguez are in the running only because original host Panama pulled out last summer due to the pandemic.

The president of the National Sports Institute of El Salvador, former basketball player Yamil Bukele, the president's brother, ratified the government's support for the candidacy made official by the National Olympic Committee.

"As INDES, we will do everything necessary so that the games remain in our country," he told elsalvador.com.

Regarding the real opportunities to win hosting rights, Bukele said "we are going to have an unprecedented investment in sports in the country, we have the support of the President, of all the federations, of the COES. I think there are great possibilities to organize the Games."

Bukele competed as an athlete in the 2002 regional Games that were hosted by San Salvador. Mayaguez organized them in 2010.

While the Salvadoran capital proposes the date of March 2023 to organize the Games, the Puerto Rican city has announced that it will hold them between the last week of May and the first week of June 2022.

"That visit to El Salvador is urgent. We are running against the clock," Felipe Pérez Grajales, president of the Mayaguez 2010 Foundation, told Around the Rings.

It is believed that after the visit to the Central American capital, Centro Caribe Sports will decide the winning city before the end of April.

Voting will take place among the 11 members of the CCS Executive Committee, possibly virtually.

The M2010 Foundation encouraged the Puerto Rican Olympic Committee to formalize the Puerto Rican candidacy after the successful experience 11 years ago and the repercussion of what would be the first post-pandemic regional mega-event in the continent.

Pérez Grajales believes that a political crisis unleashed in recent days in Mayaguez and that has been the focus of attention for all of Puerto Rico, will not affect the candidacy.

"No economic contribution was ever established by that municipality. The initial financing comes directly from the state government," he clarified.

"Our project is viable. We want to have austere but possible Games," remarked Felipe Pérez.