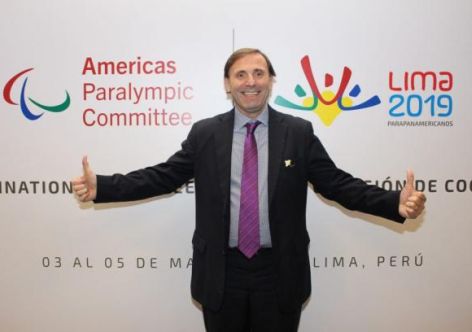 (ATR) Cuba's Eduardo Montenegro will serve as acting president of the Americas Paralympic Committee (APC) until elections are held at an Extraordinary General Assembly in 2018.

The APC Executive Committee met in Lima, Peru, on Nov. 17 where leaders dealt with the fallout following the death of APC President Jose Luis Campo on Oct. 16.

O’Neill Dussliere and Zeledon’s appointments are pending ratification by the International Paralympic Committee (IPC) Governing Board and next year’s APC Extraordinary General Assembly, according to an IPC release.

"In the meantime we will continue to work on the strategic plan of the APC engaging development of the region of the Americas," Montenegro tells Around the Rings.

Montenegro will directly monitor preparations for the Parapan American Games coming to Lima in 2019.

Montenegro came out of Cuba in July 2013 by a personal contract as sports director of the Colombian Paralympic Committee, after serving as the technical director of the Cuban Paralympic teams for several years. He later obtained Colombian nationality and became the vice president of APC in 2015, the position he was re-elected to last March.

Campo passed away in his home city of Mar del Plata, Argentina after suffering a suspected heart attack while participating in a fundraising event. He was elected the APC’s founding president in 1997 and served two terms until 2005 when he was replaced by Brazil’s Andrew Parsons who is now IPC president. Colombia’s Octavio Londono was APC president from 2009-2013 before Campo was again voted president in 2013 and re-elected in 2017.

The exact date and place of the extraordinary General Assembly where Campo’s permanent successor will be chosen has yet to be determined.