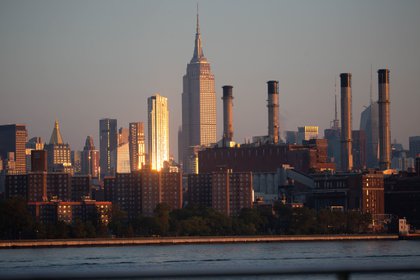 The Manhattan skyline seen from the Brooklyn borough of New York, U.S., on Friday, Sept. 4, 2020. U.S. stocks fell to a two-week low as megacap tech shares came under pressure for a second day, but came off their lows as the holiday weekend approached. Photographer: Michael Nagle/Bloomberg

(Bloomberg) -- Blackstone Group Inc.’s Alight Solutions is nearing a deal to go public via a merger with a blank-check special acquisition firm backed by investor Bill Foley, according to a person familiar with the matter.

The deal by Foley Trasimene Acquisition Corp would value Alight, a benefits administrator business, at $7.3 billion including debt, the person said, who asked not to be identified because the information was private. The transaction could be announced as soon as Monday.

Based in Lincolnshire, Illinois, Alight provides human-resource support services such as payroll, health benefits and employee communications for large companies in 188 countries, according to its website. The company was a division of Aon Plc until Blackstone bought it in 2017 in a transaction valued as much as $4.8 billion. Since then, Alight has acquired several other human-resources and technology companies.

In 2019, Blackstone postponed its plans for Alight to raise as much as $800 million in an initial public offering just before final pricing due to market conditions, people familiar with the matter told Bloomberg News then.

Blackstone, Alight and Foley Trasimene declined to comment on the deal talks. Reuters reported on the news earlier.

Foley, 76, is a veteran investor who’s helped build and lead companies including Fidelity National Financial Inc., the largest U.S. title insurance firm. The deal follows his other involvement with Blackstone. In December, another blank-check firm of his reached a $9 billion deal to take Paysafe Group Ltd., the online payments firm backed by Blackstone and CVC Capital Partners, public.