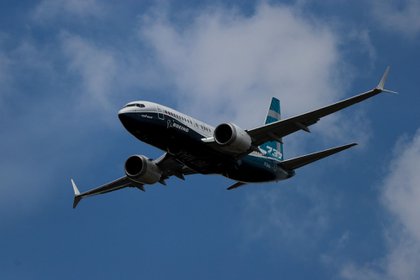 A Boeing Co. 737 Max 7 jetliner flies during the flying display on the opening day of the Farnborough International Airshow (FIA) 2018 in Farnborough, U.K., Photographer: Simon Dawson/Bloomberg

(Bloomberg) -- Boeing Co. set a target of designing and certifying its jetliners to fly on 100% sustainable fuels by 2030 amid rising pressure on planemakers to get serious about climate change.

Regulators currently allow a 50-50 blend of sustainable and conventional fuels, and Boeing said Friday it would work with authorities to raise the limit. Rival Airbus SE is considering another tack: a futuristic lineup of hydrogen-powered aircraft that would reach the skies by 2035.

The aircraft manufacturers face growing public clamor to cut emissions in the aviation industry, which added more than 1 billion metric tons of carbon dioxide to the atmosphere in 2019, according to BloombergNEF. Boeing has the added challenges of closing Airbus’s yawning lead in narrow-body jet sales and grappling with $61 billion in debt.

“Sustainable aviation fuels are proven, used every day, and have the most immediate and greatest potential to reduce carbon emissions in the near and long term,” Chris Raymond, Boeing’s chief sustainability officer, said in a statement.

While the U.S. planemaker is relying on technology honed in test flights since 2008, it needs to find a feedstock that doesn’t damage rain forests and other habitats, said aerospace consultant Richard Aboulafia. For Boeing’s first commercial flight using biofuels, a Virgin Atlantic 747 jumbo was powered by oil from coconuts and babassu nuts, a palm tree grown in the Amazon.

“It’s a question of making something that’s sustainable and non-ecologically ruinous,” Aboulafia said. “There’s the rub.”

The Chicago-based company said sustainable fuels can be made from inedible plants, agricultural and forestry waste, nonrecyclable household waste and gases released by industrial products. Boeing cited studies showing that emissions could be cut by 80% over a sustainable fuel’s life cycle, with the potential to some day reach 100%.

Airbus, meanwhile, has to persuade buyers to embrace an aircraft that loses 20% or more of its interior to the cooling systems necessary for liquid hydrogen, Aboulafia said. The European manufacturer has given itself five years to develop a commercially viable plane with engines that burn both hydrogen and conventional jet fuel.

“The Airbus approach is potentially far greener and far more ecologically benign,” Aboulafia said. “But that mid-2030s timetable is a complete fable.”