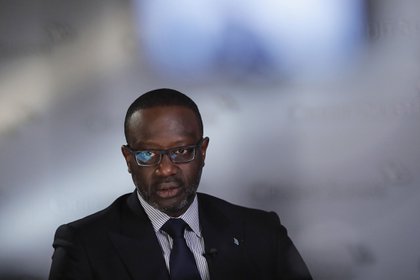 (Bloomberg) -- Former Credit Suisse Group AG Chief Executive Officer Tidjane Thiam ruled himself out of the running for the top job at UniCredit SpA, narrowing the field to a handful of top Italian executives.

A spokesman for the executive confirmed he’d been approached for the role. He told Bloomberg News that Thiam was flattered to be considered, but wished to focus on his other commitments.

Thiam, who resigned from Credit Suisse almost a year ago after a spying scandal, is working on creating a new blank-check firm. The 58-year-old Ivory Coast native is planning a $250 million special purpose acquisition company, or SPAC, to invest in financial services.

UniCredit is seeking to name a replacement for outgoing CEO Jean Pierre Mustier as soon as next month, according to people familiar with the matter, after the French executive stepped down over a boardroom power struggle. Thiam’s withdrawal leaves ex-UBS Group AG investment banker Andrea Orcel as the most prominent possible replacement.

As the CEO hunt progresses, UniCredit is also in talks with the Italian government over a possible takeover of troubled state-owned lender Banca Monte dei Paschi di Siena SpA. Mustier had opposed any domestic acquisitions for UniCredit.

Thiam’s SPAC would be listed in New York and JPMorgan Chase & Co. is helping with the fundraising, a person familiar with the matter has said. Blank-check companies have boomed over the past year as companies see the structure as a quick way to raise capital, while hedge funds and prominent financiers like Bill Ackman back SPACs to take advantage of a hot market for initial public offerings.

People familiar with the matter have also said an appointment of Orcel is challenging. The executive is suing Banco Santander SA for about 100 million euros ($122 million), claiming the Spanish lender ruined his career with a last-minute decision to back out of hiring him in 2019.

The lawsuit -- in which UBS Chairman Axel Weber will give testimony -- is due to start in March. The legal proceedings are one potential impediment to him joining the bank, one of the people said.