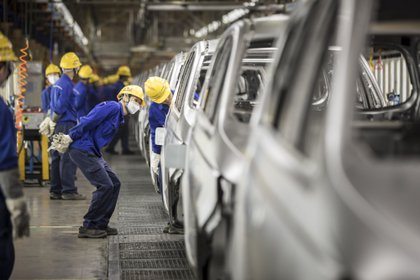 Employees inspect vehicles in the weld shop at the SAIC-GM-Wuling Automobile Co. Baojun Base plant, a joint venture between SAIC Motor Corp., General Motors Co. and Liuzhou Wuling Automobile Industry Co., in Liuzhou, Guangxi province, China, on Wednesday, May 23, 2018. GM and its partners sold 4 million vehicles in China in 2017, about 1 million more than the automaker sold in the U.S.

SAIC Motor Corp., China’s biggest automaker, is aiming to boost sales by 14% this year, the most in over a decade, as it steps up efforts in the increasingly competitive new generation, electric-vehicle segment.

The company is targeting sales of 6.4 million units in 2021, with a 140% increase in new-energy vehicle deliveries to 768,000 units, a person familiar with the matter said. The sales goals are preliminary and may change, said the person, who asked not to be identified discussing information that isn’t public.

SAIC, which has partnerships with Volkswagen AG and General Motors Co., saw sales drop 10% in 2020 to 5.6 million units. Covid-19 compounded a three-year downturn for China’s auto industry, but demand recovered in the latter half of last year as the country contained the virus and people flocked to NEVs.

Tesla Inc. has prime position in EV sales in China, where it opened a factory a year ago, but several domestic players such as NIO Inc. and Xpeng Inc. have emerged as challengers to the U.S. company as well as the older guard of Chinese automakers like SAIC.

The shifting landscape has pushed SAIC into action on intelligent electric cars. It started production at a 17 billion yuan ($2.6 billion) NEV factory in Shanghai in October and announced a high-end smart car project with partners including e-commerce giant Alibaba Group Holding Ltd. at the end of last year.

A representative for SAIC declined to confirm the 2021 sales targets, saying an official forecast may come later.

SAIC has been China’s biggest automaker for 15 years, with total sales of 6.2 million passenger and commercial vehicles in 2019, compared with 11 million for VW, 7.7 million for GM and more than 10 million for Toyota Motor Corp.