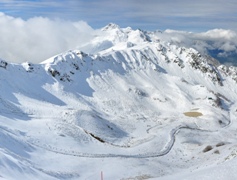 (ATR) Sochi 2014 president and CEO Dmitry Chernyshenko tells Around the Rings the continued construction of the future Olympic venues is an unprecedented and groundbreaking endeavor in Russia’s history.

"It’s a once-in-a-lifetime opportunity to have to create the future here," Chernyshenko said during a recent interview in Sochi.

"I remember when we were sitting with some colleagues and trying to imagine how to implement the best process available with the empty field to create the Olympic Park, the first Olympic Park ever in the history of the Winter Games."

Design of the Olympic Park will make the Sochi 2014 Games the most compact in history. Also referred to as the Coastal Cluster, roughly 75,000 guests will be able to occupy the premises simultaneously with all six ice competition venues within close proximity.

"Then time passed away and suddenly you see the walls and you can recognize it in accordance to the drawings," said Chernyshenko, a resident of Sochi who was appointed CEO of the bid committee in November 2005.

"This is the most exciting moment and the greatest available award from our activity and you see we are working day and night to deliver the project.

"It is the most ambitious project for our country as it is the biggest construction site now with more than 50,000 people working 24/7."

Chernyshenko also noted that all venues will offer ample space for handicapped spectators, making them the most handicap-accessible sport arenas ever built in Russia.

For Sochi 2014’s environmentally friendly development of the region and venues, the organizing committee earned the "Environment and Sustainability Award" at the International Sport Event Management Awards last month in London. The new award honors a sports event that has displayed a significant awareness towards the environment.

"Take the green standard with the construction. Before this, it didn’t exist in our country," said Chernyshenko. "This was a credit to trust and the confidence that Russia would start and be able to change this for a better life and do positive things."

The Rosa Khutor Alpine Center, situated in the Krasnaya Polyana region of the Caucasus Mountains about 40km from the coastal venues, will host its first FIS World Cup in February.

The races will mark just the second official Olympic test event in Sochi. Smaller-scale Europa Cup races were contested last winter but were hindered by uncooperative weather and an avalanche near the top of the slope.

After training runs during the days prior, the future Olympic downhill course will receive its first official test on Feb. 11 when the world’s elite alpine racers compete. The weekend schedule concludes with a super combined, comprised of a downhill and slalom on Sunday. A week later, women are also scheduled to race in the same two disciplines.

"There are only a few places in the world which could be called an Olympic downhill course and I’m very proud that Sochi joined this very exclusive club," said Chernyshenko.

"Our course is outstanding because we started from scratch. We evaluated and analyzed all existing Olympic downhill courses and we designed it with the involvement with one of the most recognized experts in course designing, Olympic champion Bernhard Russi."

Russi, 63, the 1972 Olympic downhill gold medalist, has been sculpting alpine courses and terrain at every Winter Games since Calgary 1988. Construction at Rosa Khutor began in December 2008 with the official commissioning of the venue scheduled for next month.

"We were lucky that we found the environmental conditions – the slopes and the landscape that allowed us to deliver this project where all disciplines are coming to the same finish area," Chernyshenko said about the venue. "Its extremely efficient for us as organizers but also very convenient for the spectators."

The Sochi World Cup downhill is the ninth of 11 races in the sport’s showcase discipline on this season’s men’s schedule.

However, FIS race organizers announced that the two slaloms are rescheduled for December 20-21 in Flachau, Austria. The women will race on Tuesday the 20th with the men following the next day, just prior to the tour’s holiday break.

Flachau has hosted women's World Cup night slaloms the past two seasons, but the men haven’t competed at the Austrian venue since December 2004.

The World Cup tour next shifts to North America with women competing in a giant slalom and slalom in Aspen, Colorado on Nov. 26 and 27. The men kickoff the season’s first speed events, a downhill and super-G, during that same weekend in scenic Lake Louise, Canada.

At the site of next season's FIS World Alpine Championships in Schladming, Austria, the FIS Council held fall meetings earlier this month. Business included reports from organizing committees of the future host city and also 2013 Nordic host Val di Fiemme, Italy; the announcement of new world championship sites and progress reports from both Sochi 2014 and Innsbruck 2012.

Additionally, the first report from Pyeongchang 2018 was submitted following its successful election as Winter Olympic host city in July.

Estonian cross-country skier Andrus Veerpalu is appealing a decision by the FIS doping panel to the Court of Arbitration for Sport.

The panel found that Veerpalu committed an anti-doping rules violation after testing positive for the use of recombinant human growth hormone (recGH) during an out-of-competition test in late January in Otepää, Estonia.

Veerpalu has been declared ineligible to compete in any FIS or National Ski Association event for a period of three years.

Written and reported in Sochi by Brian Pinelli