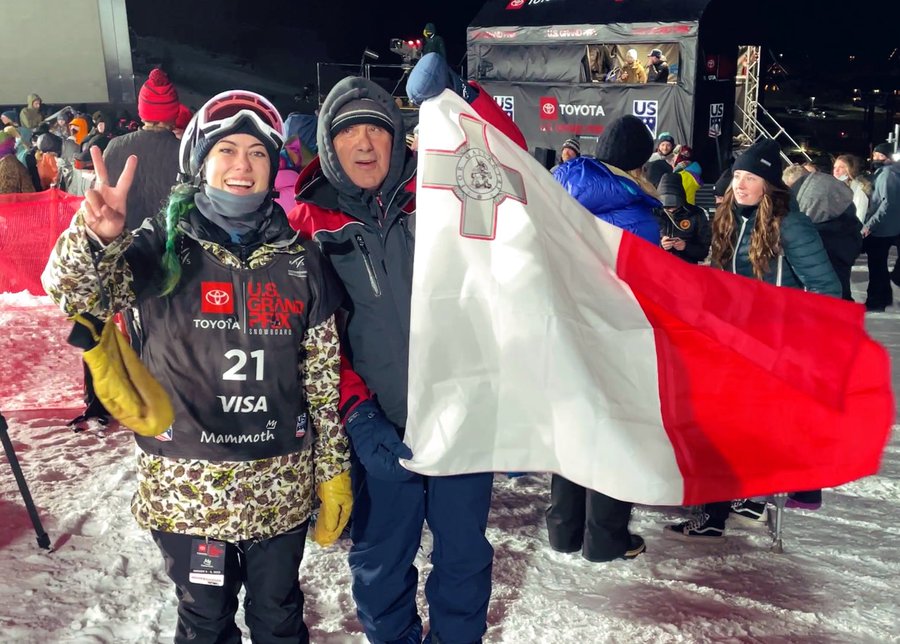 Jenise Spiteri is set to make history as the first snowboarder to represent Malta at the Winter Olympics. Her participation at the Beijing 2022 Winter Olympics will mark a newer, more extreme chapter of her family’s fascinating relationship with the Winter Games.

She told Around the Rings, “the message that I want people to be able to take from my presence at the Olympics is that it’s never too late to go after a dream.” Part of the inspiration for Spiteri’s dream may have come from the foundations laid by her grandfather decades prior.

Speaking to Around the Rings she said her grandparents immigrated to the United States after World War II. “They were in a situation where the country got so destroyed with the bombings that there was no where for them to live and start their family and their life.”

“My grandpa had a cousin who had already come to San Francisco, and he said ‘hey, come here. I have a place for you to live. I can help you get a job,’ and so my grandparents immigrated over in the 1940s.”

In the years following his immigration to the United States from Malta, Joseph Spiteri would go on to found SP-Teri, an ice skate manufacturer. Jenise Spiteri commented, “he thought Spiteri was too difficult for people to remember. SP-Teri would be easier.”

A short summary of the company’s history, posted to SP-Teri’s website, states that Joseph Spiteri started making figure skating boots in 1948. He established his own company after the death of his employer in 1962. 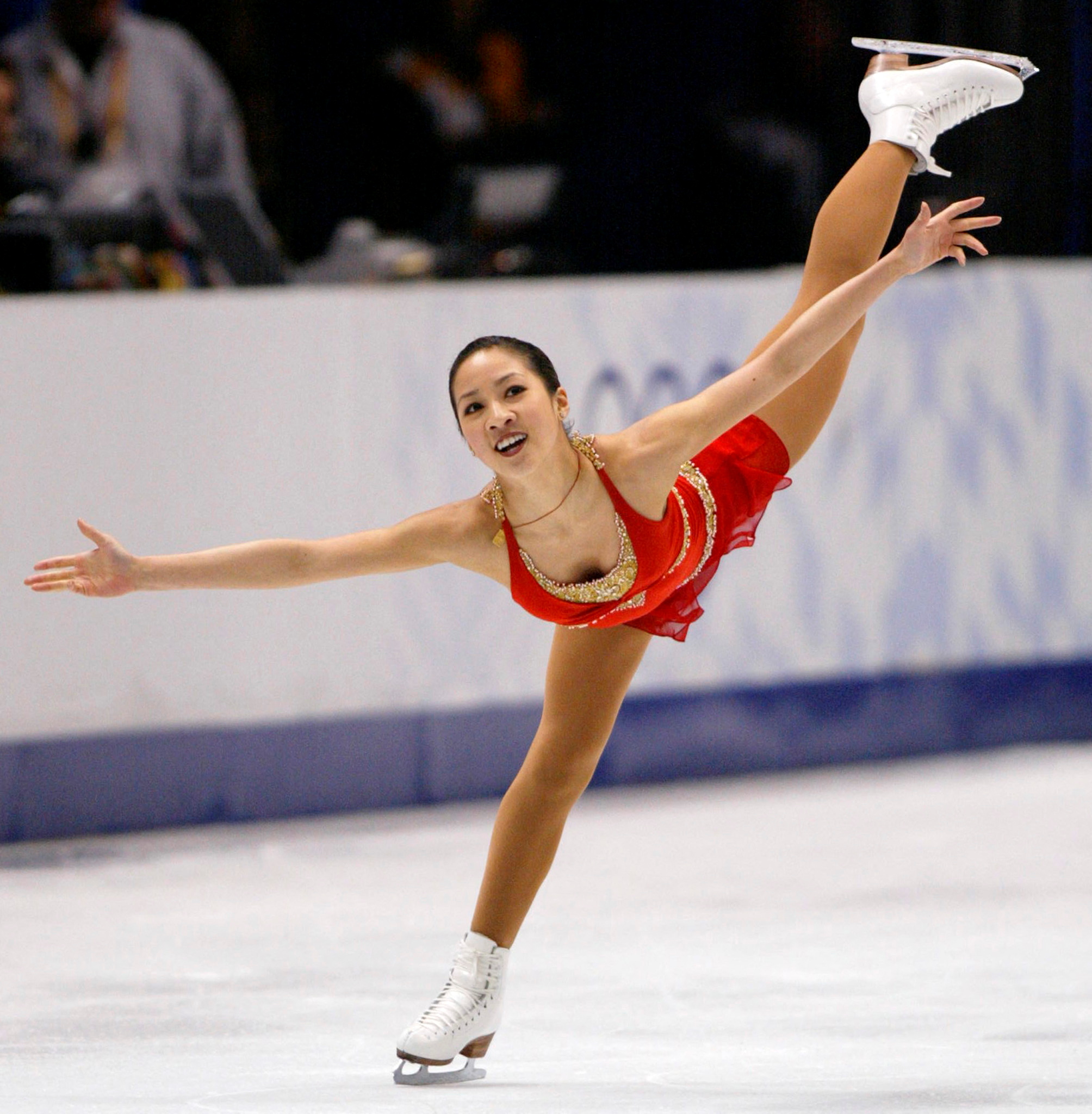 Speaking on this part of her family’s history, Spiteri said, “my grandpa actually started an ice skating boot company that made figure skates for a lot of Olympic athletes over the years, like Michelle Kwan wore our family skates.”

She added, “NBC would come and do interviews at the shop with my grandpa about how he started the company, and came from Malta, and all that.”

Switching to focus on her career, Spiteri stated, “in the beginning of my snowboarding, it was maybe my second year in, when I was talking to some people about how my family’s from Malta. They were like, ‘why don’t you represent Malta? That’d be so cool.”

Spiteri explained, “I was thinking about it and I just felt like it would be a really cool thing to do, especially in just honoring my grandpa. That he supported all these American Olympians over decades, and now I’m representing his home country.”

“He passed away before getting to see me compete in snowboarding, but I know he would be so overcome with pride to see me represent Malta.”

Spiteri’s late grandfather wouldn’t be alone in his pride of seeing his granddaughter compete for Malta on the global stage. Spiteri told Around the Rings, “I’m hearing from my cousins that are in Malta, that I’ve been all over the news. They’re going crazy talking about it.” 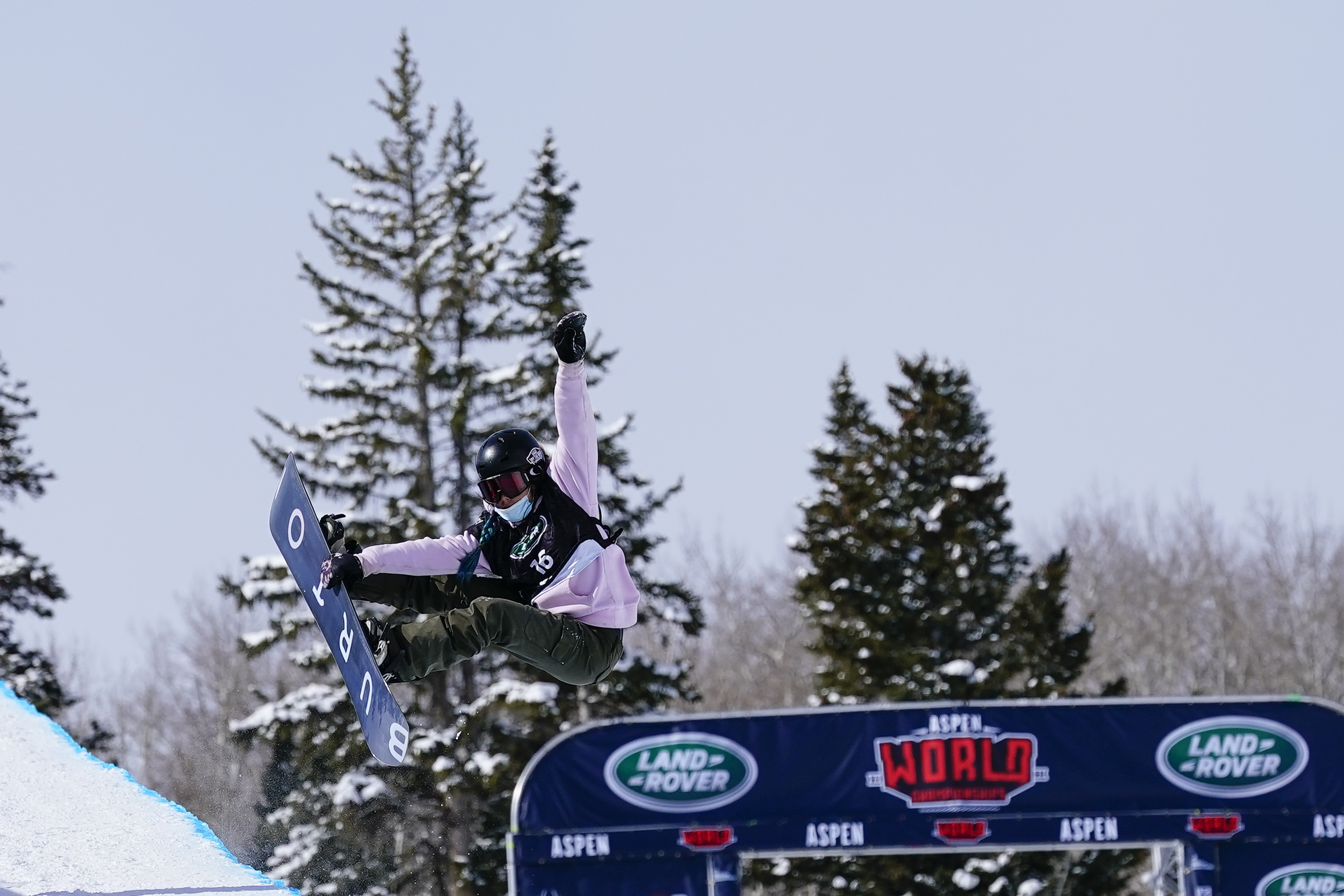 “I think people in Malta, are pretty excited because they don’t really have any expectations. They didn’t even know they were going to have an athlete at the [Winter] Olympics, so now is just like, ‘oh, cool! We’re involved in this!”

She added, “everybody has been really supportive. I’ve had a lot of really nice comments from people.”

“The [Maltese] Olympic Committee basically left the door open for me to do whatever I needed to do, and the ball was in my court to enter what events I needed to do and train where I needed to go. We’ve been in touch the whole way, and now they’re really excited that I qualified.”

She added, “in 2018, we thought I was going to qualify. I ended up being one spot out, and not being able to get in.” 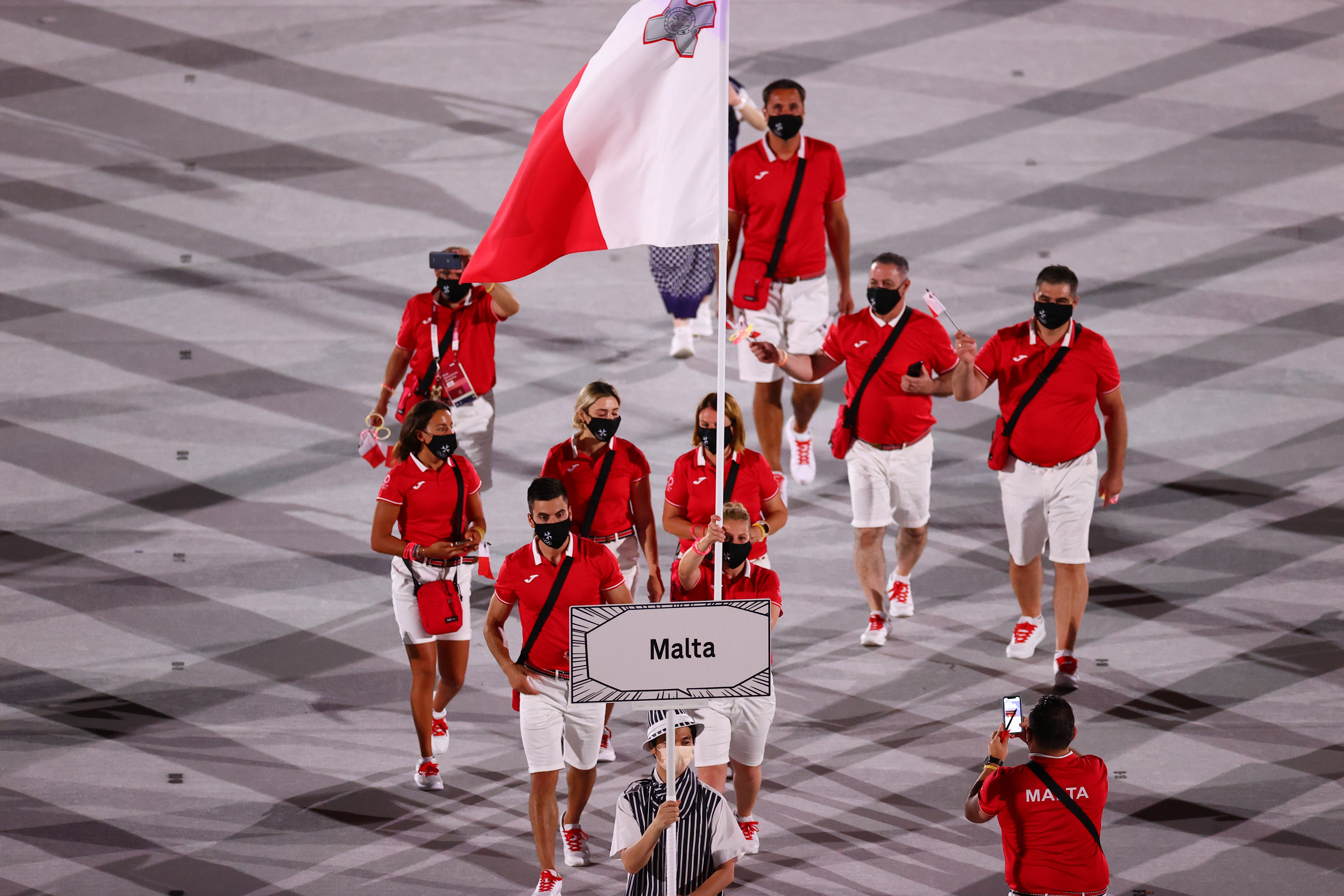 “It was pretty cool because the [Maltese] Olympic Committee, after the Olympics, mailed me a package with the opening ceremonies outfit that I would have worn. They said, ‘we know how hard you worked for this, and that you really tried, and we want you to have this piece because we know how bad you want it.’ They’ve been really supportive and cool.”

Commenting on her failure to qualify for the 2018 Winter Olympics, she stated, “when I found out I missed the 2018 Olympics, I was destroyed. It was the worst I ever felt. I was absolutely torn apart.”

However, pivoting to her role as a content creator helped her overcome those feelings. Spiteri said, “It was something to be able to give my mind a little bit of a vacation. It’s a good distraction.”

When asked how she would define herself, given the many hats that she wears, Spiteri answered, “I say that I’m a snowboarder and a content creator. I think that’s the simplest way to do it.”

She explained, “I grew up actually acting and modeling. I started that when I was, like, three years old. I planned on that being my life path, until I wanted to go after snowboarding when I was 18.” 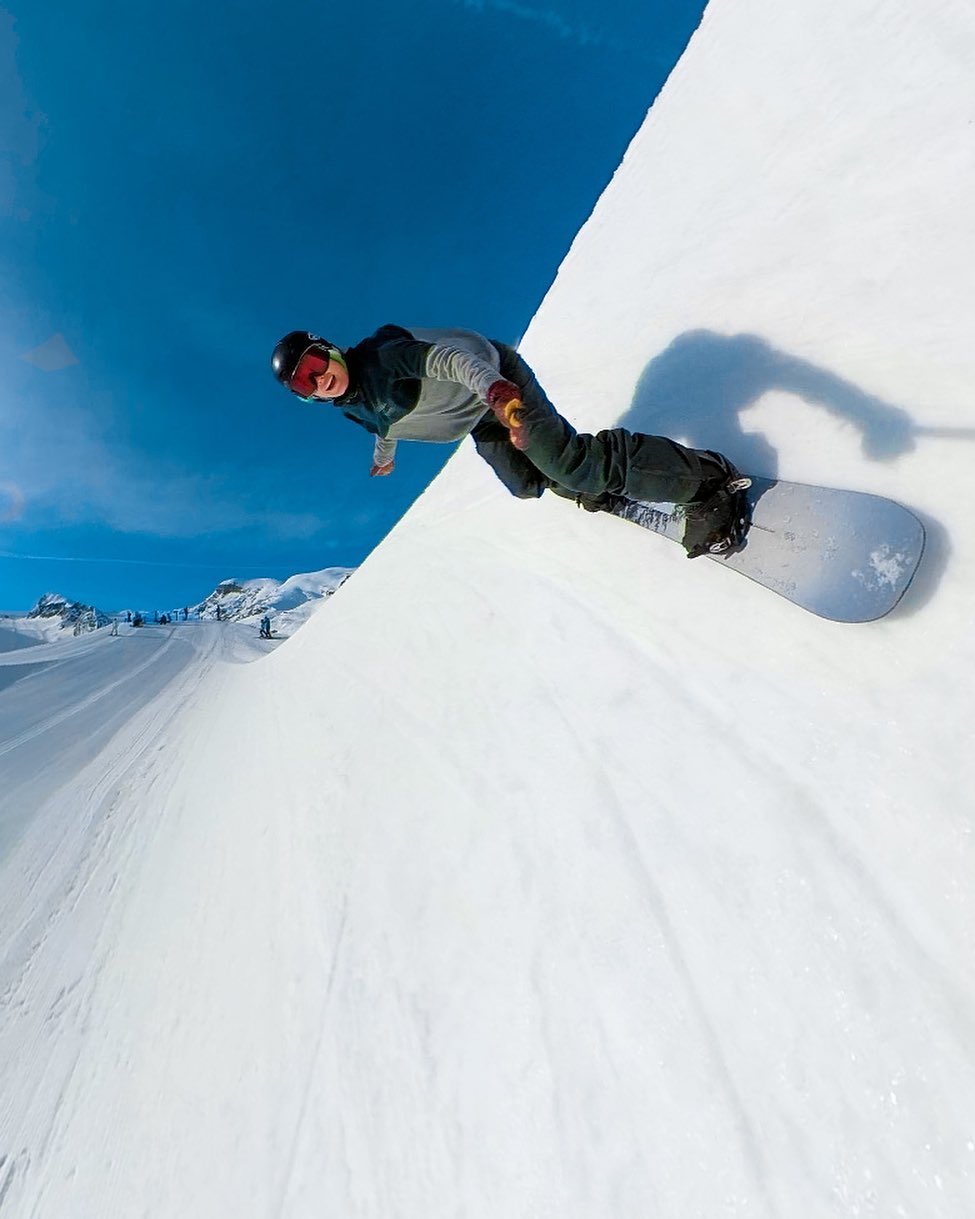 Spiteri added that switching between the two pursuits helped her find her passion for snowboarding again, stating “in 2018, when I got my knee surgery, I lived in L.A. for that next year, and I did get back into acting. It was really nice, and super refreshing. I went snowboarding just for fun that year. I wasn’t training. It reignited my love of snowboarding again.”

Her love for snowboarding has taken her all the way to the Winter Olympics this time around. When asked if she had any particular goals for Beijing, she stated, “I have two new tricks that I’m trying to get this week that I’ve never done in competition before.”

“One of them is a backside 900. I don’t want to claim it’s too hard, since I’ve never done one, but it would be my dream to be able to do it at the Olympics.

She was unsure about what to expect from her first Olympic experience, stating, “I have no idea what it’s going to feel like to be there in that moment. Just knowing that the entire world could be watching me compete.”

“Usually, at our qualifying events…there will be like five people watching qualifiers. We don’t get a crowd. We compete at nine in the morning, so maybe one athlete’s parents come, and the boyfriend of one other person will be there. It’s a very small group that gets out on to the mountain at nine in the morning to watch us. So, I don’t know how I’m going to feel, knowing all those people are there watching.”

Lastly, Spiteri was asked if there was a particular nickname she’d want if she was to gain the fame that other athletes from non-traditional winter sports countries had when they participated at the Winter Olympics. Spiteri responded, “if I could be the Maltese Falcon, I’ll take that.”

“The message that I want people to be able to take from my presence at the Olympics is it’s never too late to go after a dream.

“Everyone I’m competing against started training when they were under 10. They were with coaches since they were five years old; seven years old. Some of the girls I train with, that are going to be going for the U.S., have posted on their Instagram to say, ‘I’ve dreamed of this since I was a little girl,’ I learned to turn a snowboard when I was 18. That is so late for this sport.”

“I had a lot of challenges, but I worked really hard. A lot of people along the way had a lot of doubts, and didn’t think I could do it. I want other people to see that, whatever it is that they dream of, that there’s no reason for them to not start. You’re never too late to go after something. You just have to be tenacious in tackling the challenges and standing up every time you fall down.”