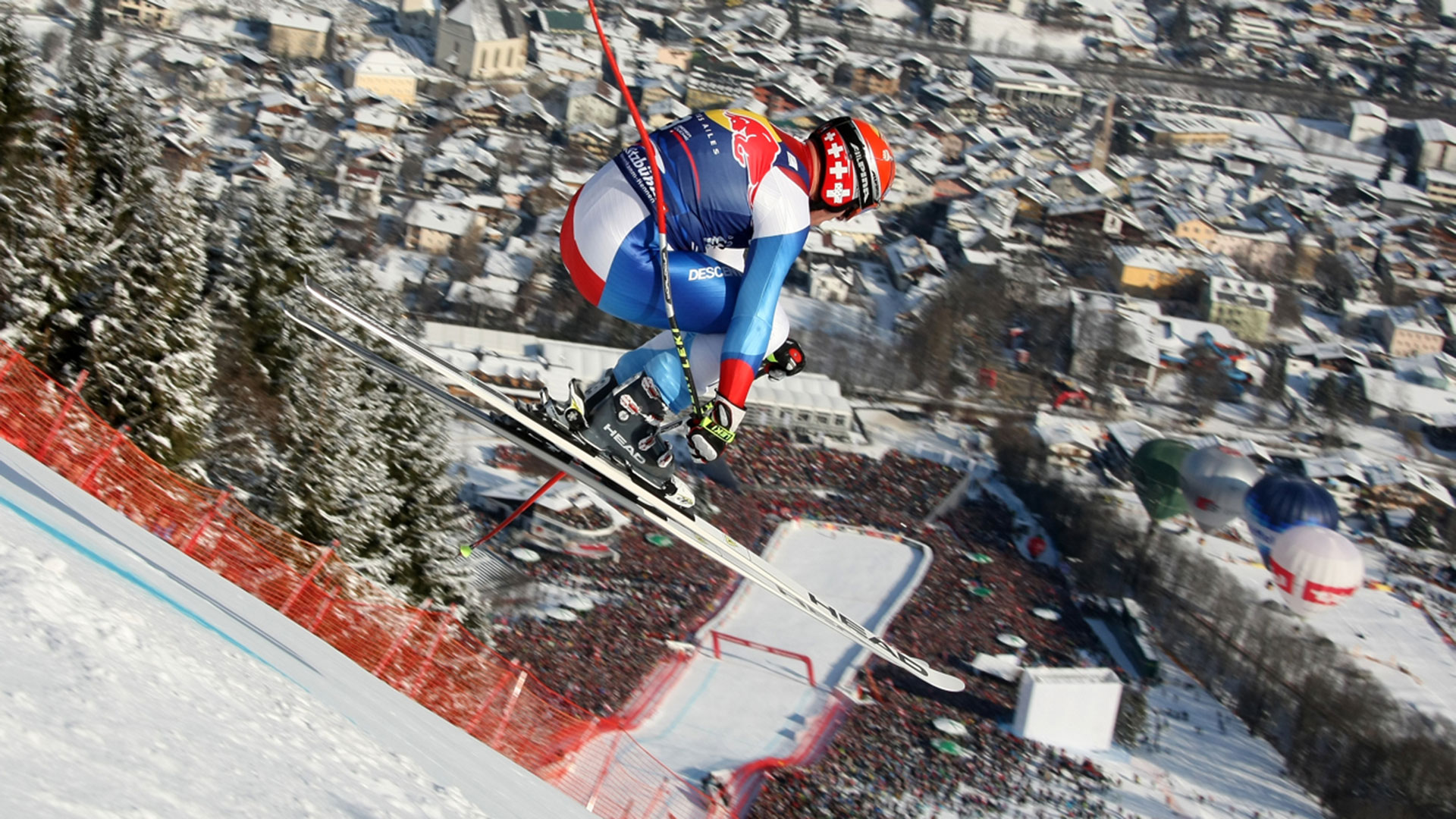 Five-time Hahnenkamm champion Didier Cuche soars through the air on the Streif above the town of Kitzbuhel, Austria (Kitzbuehel Hahnenkamm)

Perched in the start house atop Kitzbühel’s vaunted Streif downhill course, ski racers experience a full gamut of emotions prior to launching themselves down a two-minute, adrenaline-infused, icy slope, testing their mental fortitude and pushing a fine line between success and fear, well aware that one miscalculation can have dramatic consequences.

Rock-hard ice, knee-rattling bumps and speeds in excess of 140 kilometers per hour down the unrelenting 3.3-kilometer track, contribute to an element of danger unlike any other course in the world.

Year in and year out since 1932, the Hahnenkamm downhill lives up to the hype. Conquer the legendary piste and its revered course sections – the Mausefalle, Steilhang, Hausbergkante, Traverse and Zielschuss – and one instantly attains ski racing legend status. This week marks the 82nd edition of the historic race in the Austrian Tyrol. 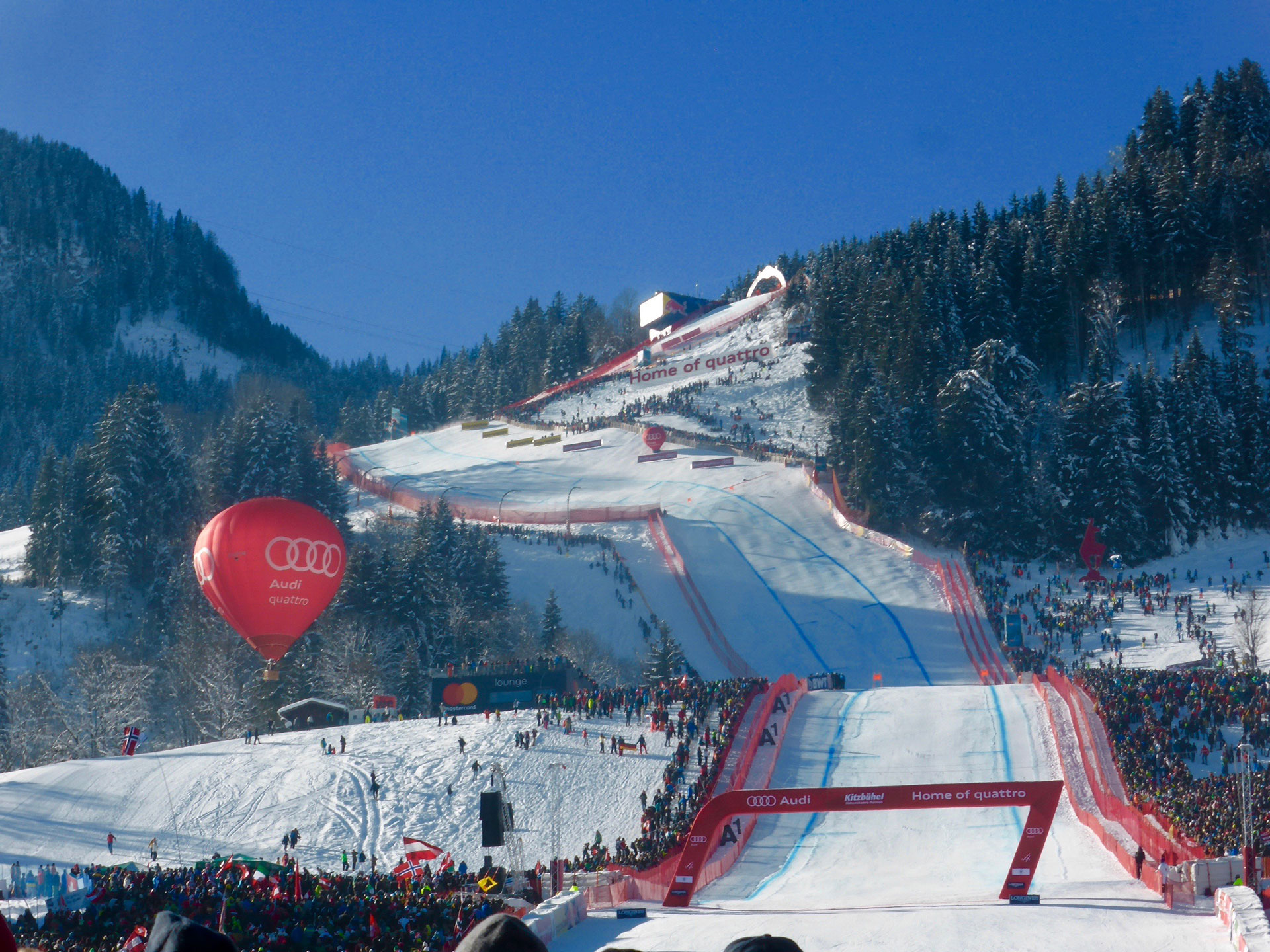 For Austrian ski racers and the more than 40,000 devoted fans that regularly attend the January spectacle, outside of a pandemic, Kitzbühel’s Hahnenkamm downhill is the premiere sporting event of the year. Champions may not be awarded a gold medal, however their names are immortalized, engraved on their very own gondola, for all to see.

Olympic downhill and super-G champion Matthias Mayer added a Hahnenkamm downhill title to his vast career accomplishments in 2020. The 31-year-old Austrian says it is still easy to get fired up for the traditional race in Kitzbühel every January.

“Kitzbühel is something special every year – I have the feeling that every time I go to the start and see down the Mausefalle that it is an amazing race and an amazing place,” Mayer says, referring to the dramatic opening jump that launches racers 50-meters through the air. 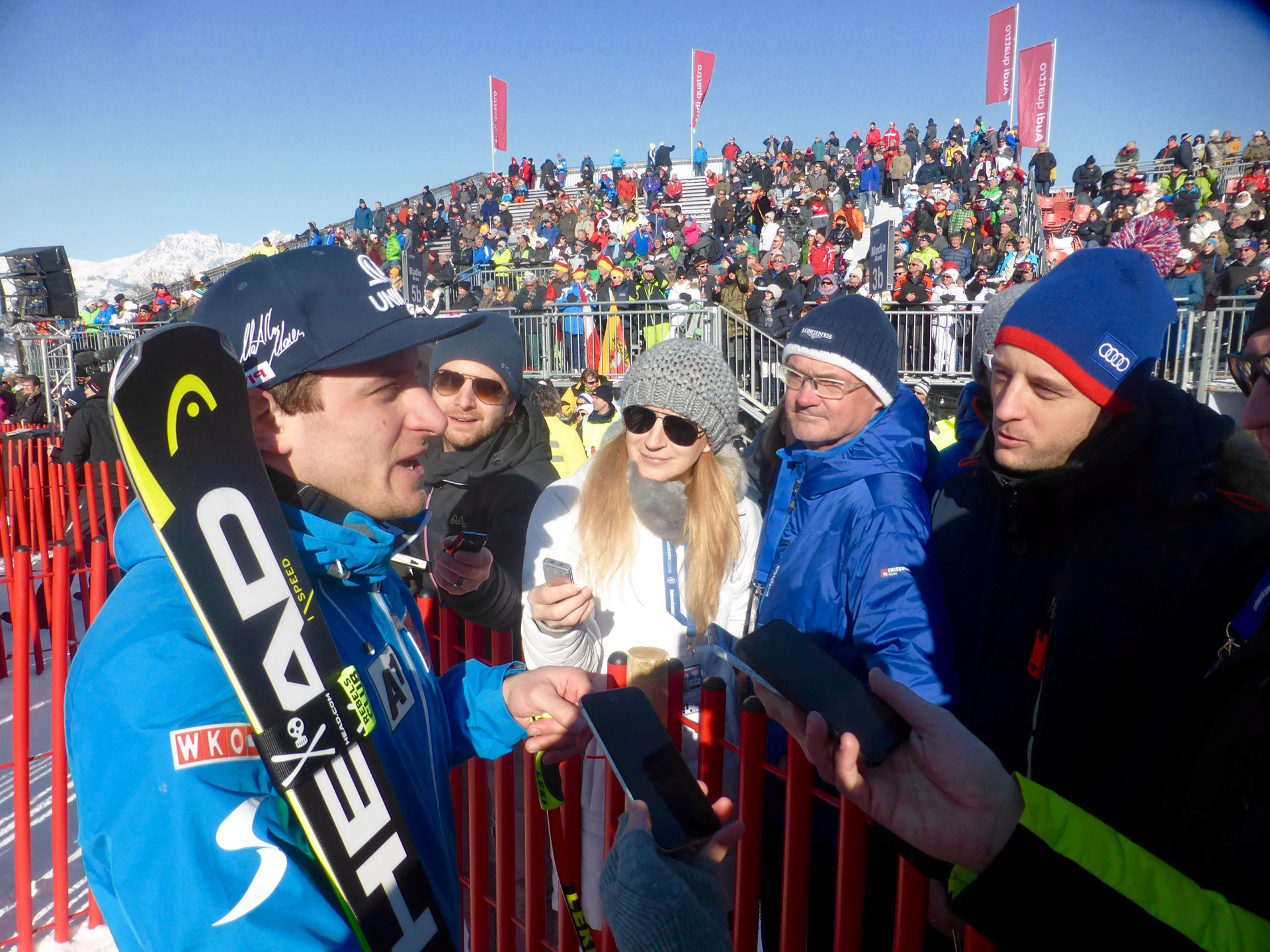 American racer Bryce Bennett recently downplayed the importance of the Beijing Olympic races, stating that he would rather speed to a victory at one of the classic World Cup downhills such as the Hahnenkamm or Lauberhorn in Wengen, Switzerland, rather than win an Olympic gold medal in China.

“The Olympics are like the least of my priorities – I would way rather win classic World Cup downhills than the Olympics, Bennett said, after a triumph in Val Gardena, Italy, in December.

“Actually, that’s not fair to say, I care about the Olympics, but my priorities are World Cup downhill races like Kitzbühel and Wengen,” Bennett said, slightly correcting his previous comment. “I’d rather win Kitzbühel every time over the Olympics.”

Swiss racer Didier Cuche, who retired in 2012, won the prestigious Hahnenkamm downhill a record five times, one more than Austrian legend and 1976 Olympic champion Franz Klammer. Frequently among the favorites for Olympic gold, Cuche won just one medal at four Olympic Games – a silver in super-G at Nagano 1998. Despite his Olympic demons and considering his five impressive Kitzbühel downhill wins, mastery of the daunting Streif and four World Cup downhill titles, Cuche is still widely considered among the greatest downhill racers of all-time.

Cuche captured his record-breaking fifth victory on the legendary course in January 2012, at the age of 37. His triumph came shortly after he announced his retirement at the famed Austrian ski resort.

“Cuche is now the King of Kitzbühel, I can live with that,’’ Klammer said, after congratulating the Swiss racer on surpassing his victory total. “I think he should have quit already before this season.” 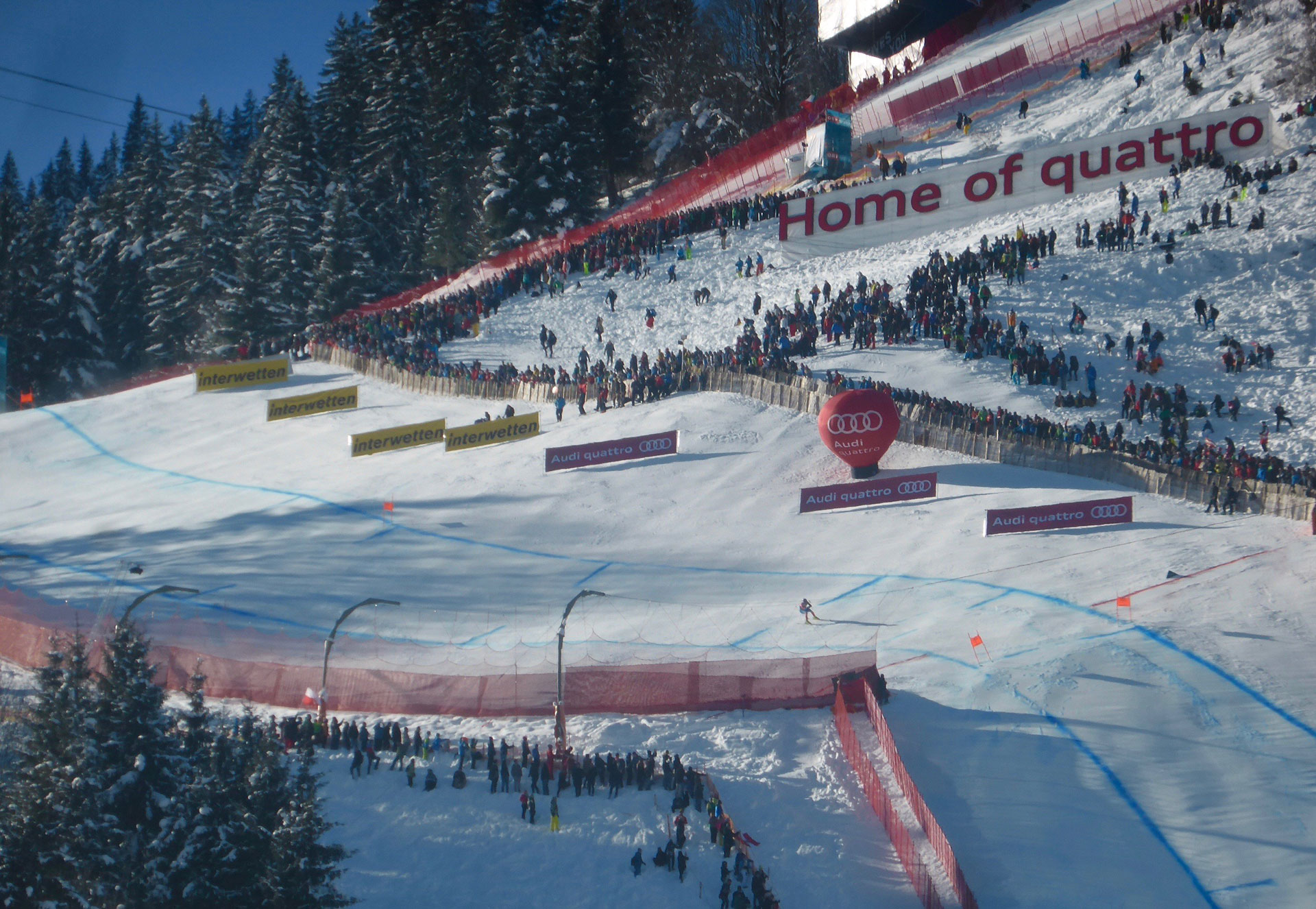 Only an elite group of racers have won both the Hahnenkamm downhill and Olympic downhill gold. Klammer accomplished the feat, under the enormous pressure of an entire country as a co-favorite at the 1976 Innsbruck Olympics, just a few weeks removed from winning in Kitzbühel. Other members of the exclusive club include Swiss racers Didier Défago, Pirmin Zurbriggen and Bernhard Russi; Austrians Fritz Strobl, Patrick Ortlieb, Toni Sailer and Egon Zimmermann; and French legend Jean-Claude Killy.

“What makes Kitzbühel so important is that all of the best skiers that ever lived have won here and they all come back,” said Canadian former champion Todd Brooker. “It’s like The Masters in golf; one of the reasons you want to win is that all the best have won there and the history entices you.” 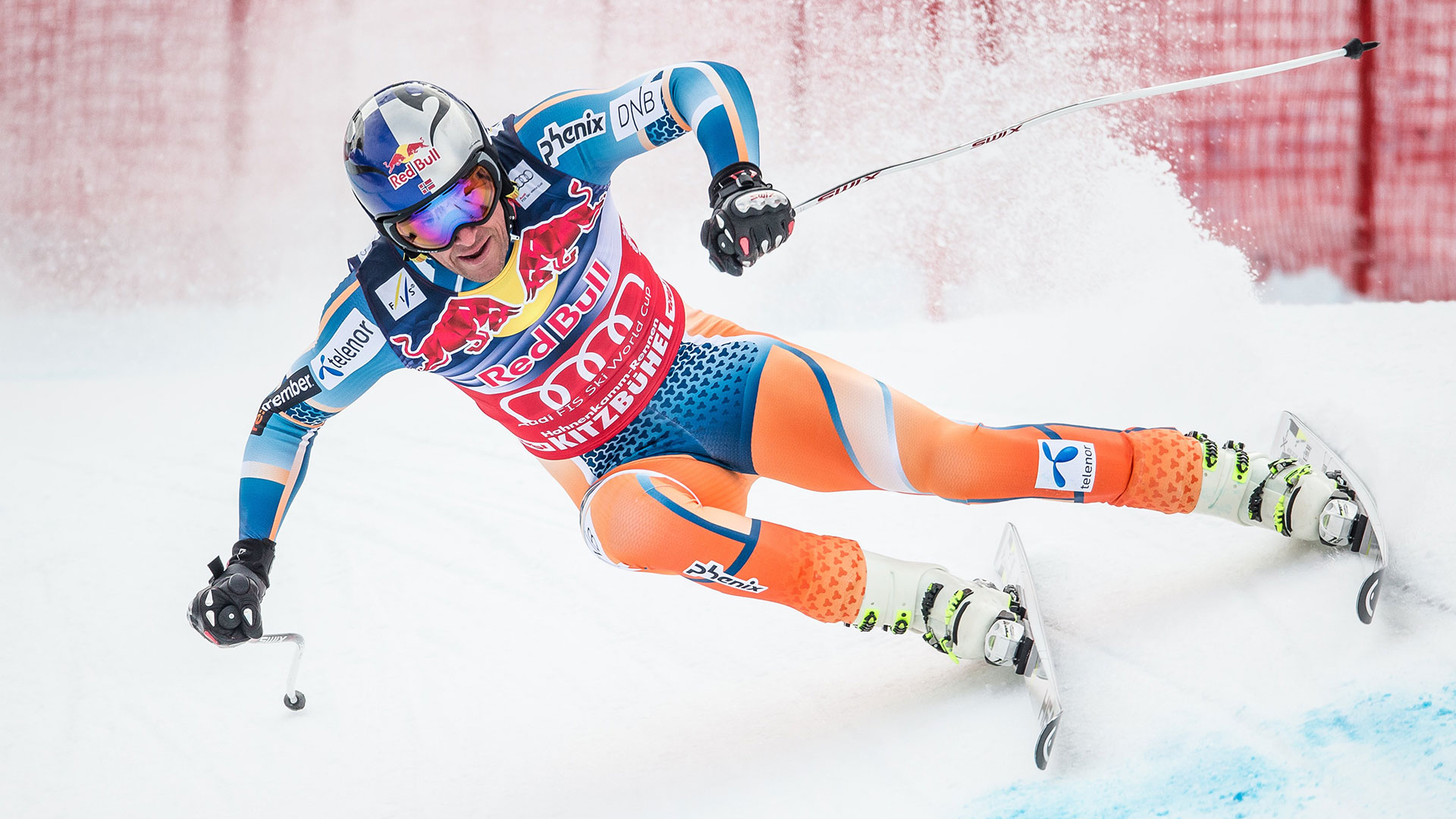 While the Hahnenkamm race is often glorified considering its rich history and stature in the sport, there is no denying the inherent dangers and potential serious consequences of high-speed crashes on the Streif. In 2016, Norwegian Aksel Lund Svindal sustained a near career-ending spill, losing control after landing off the Hausberg Jump and violently tumbling into the safety nets approaching the bottom of the course.

The highly motivated Norwegian ski racer – who retired after the 2019 world championships in Sweden – somehow managed to rebound and rehabilitate his severe right knee injury in an improbable comeback, against the advice of his doctors, returning to racing at the highest level.

During his comeback, Svindal professed that the one race that he most wanted to win was the Olympic downhill.

“There’s plenty of time for more squats, more skiing,” Svindal said, at the time of his rehabilitation. “My goal is to be a favorite at the Olympics, but for everything to work out that day, that’s more of a dream.”

The Hahnenkamm and Olympic downhill ahead

Due to the close proximity in scheduling between the annual Hahnenkamm race weekend and the Olympic Winter Games every four years, Hahnenkamm favorites are usually also considered Olympic downhill favorites.

This week on the sacred grounds of Kitzbühel - where the world’s fastest ski racers have once again convened - downhill training runs on the Streif are scheduled for Wednesday and Thursday, preceding consecutive downhill races on Friday and Saturday. Saturday’s event is considered the Hahnenkamm downhill proper. 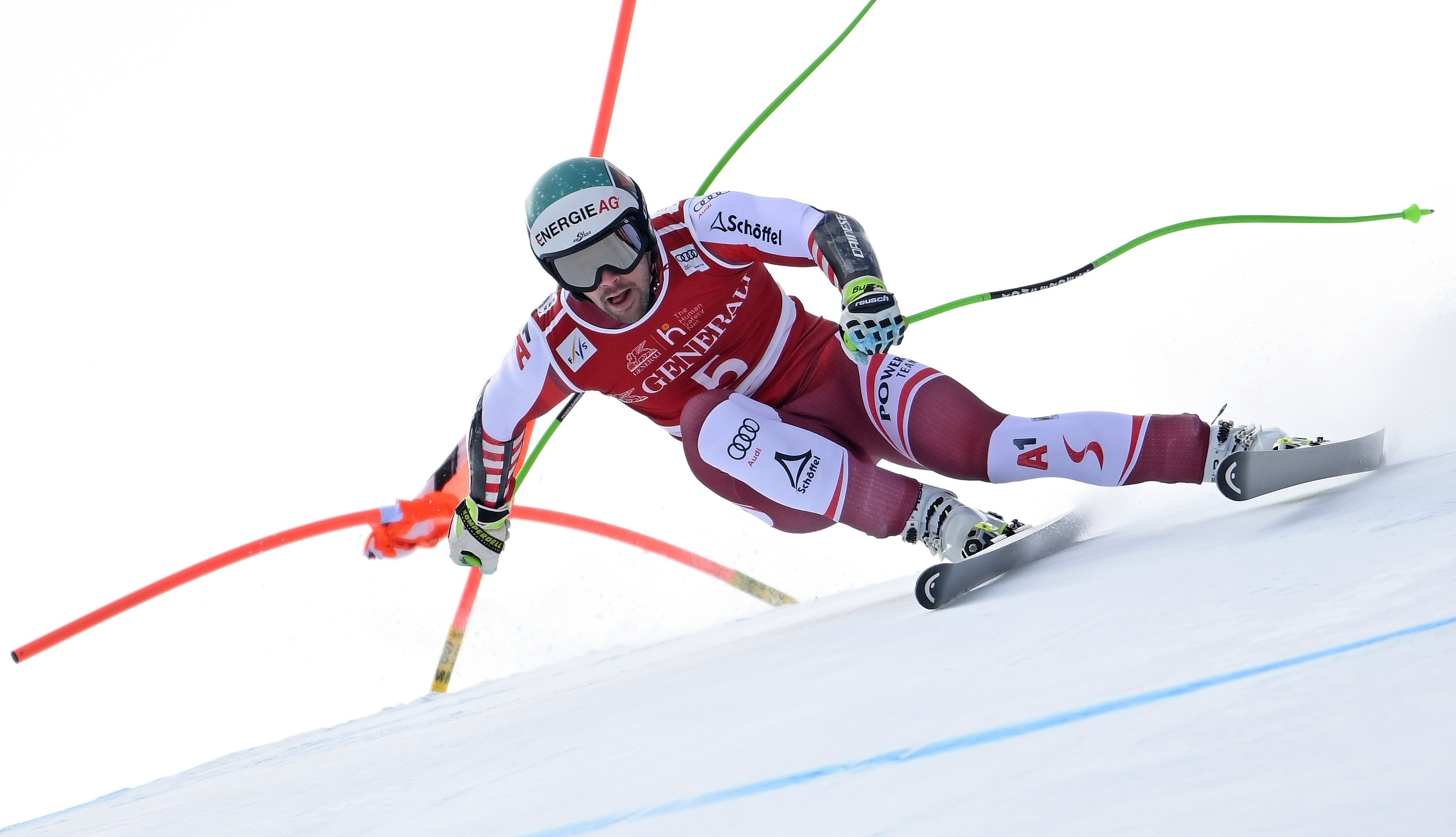 Favorites include the Austrians Mayer and Vincent Kriechmayr, Swiss 2020 Hahnenkamm champion Beat Feuz and three-time winner Dominik Paris of Italy. Unlike at the Olympic Games, surprise winners in Kitzbühel are infrequent, as course knowledge, a well-calculated game plan and proven experience are paramount.

Whether one prefers the drama, high-speed intrigue and perils of the Hahnenkamm downhill in Kitzbühel, or the harder to handicap Olympic downhill in Beijing, a race that will play out on an unknown course that none of the top international racers have seen, at least one thing is certain: skiing and winter sports fans are in for a few thrilling, unpredictable, edge-of-your-seat weeks of downhill racing.