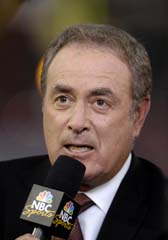 Veteran Olympic broadcaster Al Michaels will host part of NBC's 2010 Olympic coverage. (Getty Images)It didn't take a miracle for NBC to bring Al Michaels back into the Olympic fold. They simply made him an offer he couldn't refuse.

Michaels, best known for his "Do you believe in miracles? Yes!" call when the U.S. hockey team shocked the USSR at the 1980 Lake Placid Olympics, will host NBC's weekend and weekday live daytime coverage from the 2010 Vancouver Olympics.

The network will televise more than 50 hours of live weekend and weekday daytime coverage from the Games, a significant increase in hours from its daytime shows in 2006.

This will be Michaels' first Olympic broadcast assignment in 22 years and his first Olympics as a host. He previously worked at four Winter Games: 1972, when NBC's crew included a grand total of nine announcers, and 1980, 1984 and 1988 when he worked for ABC. He also was an ABC announcer for track and field and road cycling at the 1984 Summer Olympics in Los Angeles.

"I really have been an Olympics freak my entire life," said Michaels, who said he's loved the Games since he was a child.

"Obviously, Lake Placid [N.Y.] would be the highlight of my career. I couldn't dream up a scenario that could ever top that."

Sports Illustrated voted it the greatest sports moment of the 20th century.

Michaels said he became the 1980 hockey play-by-play announcer by default: Among such legendary ABC broadcasters as Jim McKay, Howard Cosell, Keith Jackson and Chris Schenkel, he was the only one who had called a hockey game. That was eight years earlier in Sapporo, Japan during his previous NBC stint when he called the gold medal game between the USSR and Czechoslovakia.

"I not only had done one hockey game, but I actually knew what icing and offside were," Michaels said.

Ken Dryden, who was the Lake Placid hockey analyst, also recommended Michaels to ABC brass because he had seen his work from Sapporo.

Michaels went on to call the 1984 Sarajevo and 1988 Calgary hockey coverage for ABC.

The six-time Emmy winner is Michaels is best known for his miracle call during the U.S. hockey team's defeat over the USSR in 1980. (Getty Images)the only broadcaster to call the Super Bowl, World Series, NBA Finals and host the Stanley Cup Final for network television.

Dick Ebersol, chairman, NBC Universal Sports and Olympics, said he and Michaels had discussed having him do other events besides the NFL. "After the Pro Bowl last month we discussed it again and he said he would love to host an Olympics for the first time," Ebersol said. "I immediately offered him this role."

When he was with ABC, Michaels' contract stipulated he would play a significant host role at future Olympics. Instead, CBS won the right to broadcast the 1992 and 1994 Winter Olympics and NBC nabbed the rest of the Games.

The 2010 Vancouver Games will be the sixth of NBC's seven straight Olympic broadcasts through the current contract and the ninth out of the last 11 Olympics broadcast by NBC.

Michaels will host five or six hours a day on Saturdays and Sundays. Ebersol said he will spend most of his time in the studio since many of the venues are so far away.

"A lot's going to depend on the temperature," Michaels quipped.

Ebersol did not reveal a defined role for Jim Lampley, who has been a host at more Olympics than any other announcer, but said, "I can't imagine a set of circumstances where he won't be with us in both Vancouver and London."

Ebersol said "nobody knows for sure at this point" when the IOC will award the U.S. television rights to the 2014 Winter Dick Ebersol expects live coverage to be part of the discussion during an upcoming meeting with affiliates. (Getty Images)and 2016 Summer Games, "but I've gotten the clear impression over the last three or four months that the IOC is going to delay the bidding for some time. What 'some time' means, I don't know. I think they're waiting for a healthier, brighter economic picture all over the world, but particularly in the U.S. They depend on it so much, as we know, being the person that writes the check.

"I certainly don't see it in the immediate future and perhaps they'll wait until after the decision for the 2016 Summer Games [in Copenhagen on Oct 2]."

Ebersol said he's sure live coverage will be a topic of conversation when NBC meets with its affiliates in April.

He said the network has done "tons of research" since 1992 that says people who live on the West Coast prefer to see coverage in primetime, even if its taped, instead of live coverage during the day when they're not at home.

"We average 25 percent more viewing on the West Coast during the Olympics than we do in any other region of the country," Ebersol said. "It's the love affair that California, Oregon and Washington all have with an outdoor life. There's an ardor to their being sports fans that's greater than any other area."

He added that out of necessity, weekend coverage will probably have to be on a delay. "I don't really think that we want to start it out there at 6 a.m.," he said, "live or otherwise."