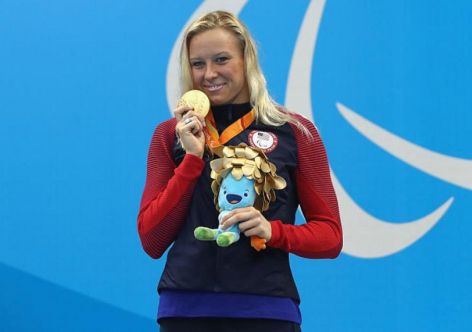 The massive television audience watching the Super Bowl learned about the adoption story of Paralympic champion swimmer Jessica Long from a Toyota ad aired during the game.

Click here to learn about her story, and the ad, in this article from People.

Roger Kingdom of the USA won the gold medal in the 110m hurdles at the 1984 Olympics in Los Angeles and the 1988 Games in Seoul.

He can now add Super Bowl winning coach to his resume.

Kingdom is the speed and conditioning coach for the Tampa Bay Buccaneers and was part of the team that beat the Kansas City Chiefs 31-9 and lifted the Vince Lombardi Trophy as Super Bowl champions on Sunday.

The Los Angeles Times reported on his path to coaching in the NFL.

Almost three years to the day after the Opening Ceremony at the PyeongChang Winter Olympics, a memorial museum opened on Feb. 7.

The museum was built on the site of the main Olympic Stadium, which was a temporary structure dismantled after the Games, which took place from Feb. 9-25.

To read the Yonhap story in its entirety, click here.

The editor-in-chief of the Chinese state-backed nationalist tabloid Global Times took to Twitter to threaten that China would respond with "serious sanctions" against any countries that boycott the Games.

Human rights groups used last week’s one year to go to the start of Beijing 2022 to call for a boycott of the Games.

A coalition of more than 180 rights groups think a boycott is necessary to combat reported human rights abuses against ethnic minorities by the Chinese government.