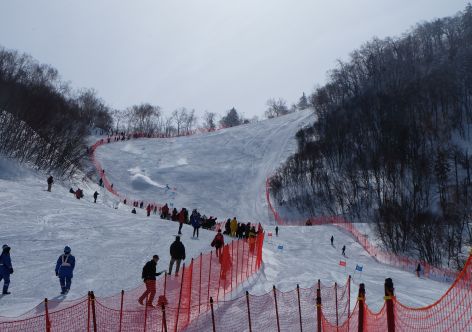 Forty-four skiers from 18 countries descended the 357-meter (1,171 foot) vertical drop course at the Mt. Teine ski area in west Sapporo. The historic lodge and the cauldron in which the Olympic flame burned during the 1972 Winter Olympics still remain.

"It’s amazing to race here where the Olympic Games were at this big event," said bronze medalist Narita. "This is home for me and its nice to have so many people watching and also from our federation."

Koyama, who recently competed at the Alpine World Championships in St. Moritz, Switzerland, was the class of the field, extending his lead in the second of two runs and winning by 1.86 seconds ahead of Korean Hyeon Tae Kim. Another Japanese racer, Tatsuki Matsumoto, 20, finished fifth, demonstrating the host country's depth in the sport among fellow Asian countries.

"I like the course here and hope I can go to the Olympics in Beijing," Matsumoto said looking ahead to the 2022 Games.

Racers from non-traditional skiing countries India, Iran, Malaysia, Mongolia, Sri Lanka, Thailand and East Timor were among those in the field.

"I skied in Sochi and I hope to go to PyeongChang too," said Mohammad Kiyadarbandsari of Iran. "The snow is very good in Iran and people come for holidays, but we only have two or three months of skiing there."

The morning run was contested under sunny skies on a day that was the nicest of the AWG so far. The afternoon's second run provided slightly more challenging conditions for racers with flat light and snow flurries falling.

Yohan Goncalves Goutt, the lone athlete representing East Timor at the AWG, received considerable media attention saying that he is thrilled to ski for the southeast Asian tropical country.

The 22-year-old Goncalves Goutt – the son of a French father and East Timorese mother – divides time between East Timor and France, where he trains with the French team, including star Alexis Pinturault.

Goncalves Goutt skipped the recent world championships in Switzerland to come to the AWG in Sapporo.

"I think it was important to come here and walk in the opening ceremony because it is the first time that Timor is in the Games," Goncalves Goutt said.

"There’s no snow in Timor and it’s a very poor country, but I hope they get the motivation to accomplish the sports they like and bring it to a higher level," he said.

Goncalves Goutt has previously competed at the Sochi 2014 Olympics and Vail/Beaver Creek world championships in 2015. He finished 14th on Wednesday, but appears on track to qualify for PyeongChang 2018.

He praised the Japanese ski organizers.

"It’s really nicely organized here and I’m very happy to ski at such a historic place," he said.

The well-known western Sapporo ski resort, renowned for its powder snow and an elevation of 1,023 meters (3,356 feet), is only a 40-minute drive from the city center.

Alpine skiing continues at Mt. Teine with the ladies giant slalom on Thursday. Men’s and women’s slalom skiers take their turn on Friday and Saturday.