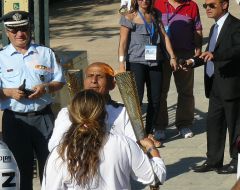 (ATR) IOC member and British Olympic Association president Princess Anne had the front row to herself for flight BA2012 to Athens on Wednesday. Not so on Friday when the Olympic torch will take a pew in 1A.

All eyes will not only be on the flame but also David Beckham, who was confirmed Wednesday to attend the Olympic flame handover ceremony in the Greek capital on Thursday. The former England football captain will then join the London 2012 delegation to bring the flame to the Royal Naval Air Station Culdrose in southwest England on Friday ahead of the torch relay's 70-day trek around the U.K. beginning May 19.

News of Beckham's role was the major London 2012 talking point of the day, a perfectly timed LOCOG announcement to help stir enthusiasm in the domestic torch relay and one that resonated globally. LOCOG chair Sebastian Coe, sports and Olympics minister Hugh Robertson and Mayor of London Boris Johnson, also part of the delegation that flew to Athens, are doing their best to promote the benefits of the relay on their three-day stay here.

Members of the British and international media who travelled out to Athens got a glimpse of the final stages of the Greek torch relay on the city's streets. It was a low-key affair – the country's economic crisis has overshadowed reporting of the eight-day relay – and the small groups of people scattered along one highway to watch the torchbearers do their runs served to underline the lack of interest.

In the evening sun, journalists joined a small crowd halfway up the Acropolis, but access was denied to a ceremony held in the ancient ruins. This was greeted by shrugs of disappointment from members of the media. The event featured government officials and representatives from the Hellenic Olympic Committee and London 2012. After it, a cheerful HOC president Spyros Capralos told Around the Rings the ceremony had gone well.

Coe believes the arrival of the flame in the U.K. will ignite huge enthusiasm in the Olympics. He expects the torch relay's journey to be packed with people through the 1,000 cities, towns and villages on the 8,000-mile route. With local authorities planning a carnival atmosphere for the relay legs in their areas, the signs are good.Every step of the torch's trek will also be broadcast live on the BBC Sport website.

ATR is told that more than 500 people will greet the torch when the gold-liveried Airbus A319 – nicknamed "The Firefly" – touches down at around 7.30pm BST on Friday evening at the Culdrose air base.

But first the attention turns to the handover ceremony on Thursday evening at the Panathenaic Stadium, home of the first Olympics of the modern era in 1896, when Beckham will be joined by five young Britons. Coe says their stories of personal achievement and contribution to sport will echo the 8,000 inspiring torchbearer stories that will be shared over the 10 weeks of the torch relay.

Reported in Athens by Mark Bisson