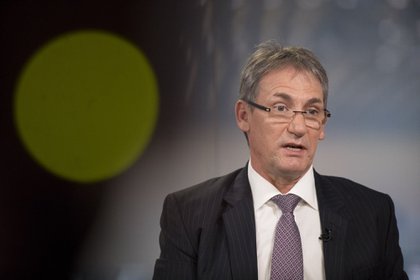 Chris Griffith, chief executive officer of Anglo American Platinum Ltd., speaks during a Bloomberg Television interview in London, U.K., on Monday, May 13, 2019. The World's biggest platinum producer is "very bullish" on both platinum and palladium, Griffith said during the interview.

The new chief will start on April 1, succeeding Nick Holland, who is retiring after 13 years at the helm. Gold Fields extended gains on the news, rising as much as 6.2% in Johannesburg trading.

While Gold Fields’ incoming CEO would be open to growing the company through new opportunities, it could also boost value by advancing existing, internal projects, Griffith said.

“I want whatever help I could bring as an operator who has turned many mines around to be able to build on what’s already been done,” Griffith said on a conference call. “There has been a great improvement in safety and productivity and I hope South Deep hasn’t been sold by the time I get there.”

At Gold Fields, he’ll be confronted with advancing the development of a new mine in Chile, while continuing the turnaround at the troublesome South Deep operation in South Africa like its larger rival AngloGold Ashanti Ltd..

Gold Fields has shifted focus to more profitable mines in Africa, Australia and the Americas as the industry in South Africa dwindles amid geological challenges and soaring costs of mining the world’s deepest deposits.

“It would be interesting to see whether he sells South Deep,” said Mandi Dungwa, an analyst at Kagiso Asset Management Ltd. “At Amplats he sold non-performing assets or closed them.”

Gold Fields, founded by Cecil Rhodes in 1887, has previously been under pressure from investors to end years of losses at South Deep. While the mine sits on the second-biggest known body of gold-bearing ore, it has failed to meet production targets despite a number of operational revamps. Its problems have been compounded by power shortages and regulatory uncertainties in South Africa.

Holland, who was instrumental in efforts to turn around South Deep, will retire six months earlier than initially announced.

The appointment of Griffith is one of several recent management changes in the global mining industry. AngloGold is also looking for a new CEO.