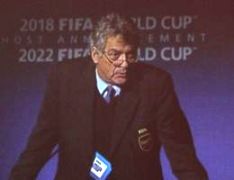 (ATR) Holland-Belgium belied their underdog status in the race for the 2018 World Cup with an impressive pitch to the FIFA Executive Committee today that may have enhanced their chances of knocking out at least one of their more fancied rivals in the FIFA vote.

Using Dutch and Belgium footballing greats to good effect, the relaxed and at times light-hearted presentation sent a strong message to Ex-co members. It set the benchmark for its rivals England, Russia and Spain-Portugal.

Johan Cruyff, the icon of 'Total Football" in the 1970s and Ruud Gullit, the Euro 1988 winning captain and bid president, played leading roles. Both appeared in several of the short, punchy videos that complemented the serious points conveyed by the presenters.

Gullit explained the joint hosting concept and the themes of the "Together for great goals" campaign. "I stand here with confidence because we have a great offer, a safe choice in every aspect," he said.

Gullit spoke of a compact bid that was advantageous to players and fans, the bid's green goals, the countries' economic power, and benefits of staging the event in "the heart of Europe".

One of the most powerful moments in the bid pitch came at the finish when a map of Europe was displayed to show how all the countries surrounding Holland-Belgium have hosted a World Cup.

Gullit emphasised that the tournament had never been held in the Low Countries; it's the only top 10 ranked country in world football which has yet to host FIFA's showpiece.

Spain-Portugal characterized their self-indulgent campaign to host the 2018 finals with a shoddy final presentation to the FIFA Executive that may just – oddly – tick some of the boxes for the watching 22 men.

The politician-heavy presentation featured the Spanish and Portuguese prime ministers, Jose Luis Rodriguez Zapataro and Jose Socrates, who have been conspicuous by their absence on the bid trail until now.

But the most telling moment came in a speech by bid leader Angel Maria Villar-Llona that ran into extra time, in which he laid into the British media for "slander". Such words may influence the watching FIFA Exco.

"We would do a sterling job if we were offered this opportunity," said Socrates at the start of the presentation. Two uninspiring films followed: a tourist video that left no platitude unturned - "Dynamic. Fantastic. Current. Metropolitan. Accessible. Experience. Admirable." – and one outlining the bid’s technical plans.

Miguel Lopez, the bid’s director, said that one of it’s main strengths was, "Cities and stadia with cutting edge infrastructure." The biggest games – opening match, final and semi finals – could be played in any of five different stadia. There were three references to the countries’ high-speed rail links but nothing to assuage concerns about their bankrupt economies.

The main draw was Angel Maria Villar-Llona, the Exco member who has been the main driving force behind a bid that lacks detail and engagement with anyone beyond the FIFA Exco.

"We offer the warmth and joy of our fans, we are happy and willing to offer for the good of world football our best efforts," he said.

"If you don’t hand us this opportunity I will be willing to work hand in hand with the bid that wins with the same enthusiasm and passion."

In a long speech that took the bid twelve minutes beyond the allotted 30 minute window, he laid into the British media, which has uncovered FIFA corruption.

"I love FIFA… FIFA is a clean institution," he said.

"FIFA works honestly, for football and the world.

With reporting by Mark Bisson and James Corbett in Zurich