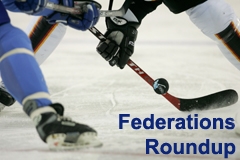 TURIN, ITALY - FEBRUARY 18: An Italian player fights for the puck with a German player during the men's ice hockey Preliminary Round Group A match between Italy and Germany during Day 8 of the Turin 2006 Winter Olympic Games on February 18, 2006 at the Palasport Olimpico in Turin, Italy. (Photo by Vladimir Rys/Bongarts/Getty Images)

The 13th Winter X Games is being held this weekend in Aspen. Colo. (Getty Images)Winter X Games This Weekend, Staying in Aspen Through 2012

The best snow-sport athletes in the world are convening for the 13th edition of the Winter X Games, which got under way today and runs through Sunday in Aspen. Colo.

A total of 200 athletes are competing this weekend in snowboarding, snowmobiling and freestyle skiing, with around 70,000 spectators expected to attend.

The snowboarding competition faces a conflict with the FIS World Snowboarding Championships in Gangwon, South Korea, which began Jan. 18 and is running through Sunday.

Seth Wescott, an Olympic gold medalist at the 2006 Turin Games, and fellow Olympian Nate Holland are competing at both events, while 2006 silver medal winner Lindsey Jacobellis and 2005 world men’s half pipe champion Antti Auti of Finland are participating solely at the X Games.

The freestyle skiing competition will include the debut of women’s slopestyle. The Winter X Games has offered men’s slopestyle for the last eight years.

ESPN and ABC will televise 15 hours of live high-definition programming. ESPN’s international networks are broadcasting the event to more than 121 countries.

The Winter X Games will stay in Aspen through 2012, where the event has been held at the Buttermilk resort for the last eight years. Organizers ESPN and Aspen Skiing Co. recently came to an agreement to keep the Games in the Colorado ski resort city.

The International Ski Federation will hold the fabled Hahnenkamm this weekend in Kitzbuhel, Austria. The 69th edition of what has been called the Super Bowl of skiing takes place as part of the FIS World Cup circuit.

The International Skiing Federation will hold its fabled Hahnenkamm this weekend. (Getty Images)The competition begins on Friday with the Super G on Friday, followed by the downhill on Saturday and the slalom and giant slalom on Sunday.

The Hahnenkamm offers the largest amount of prize money on the FIS World Cup circuit, with around $700,000 up for grabs.

The race is known for its extremely challenging course, which begins at an elevation of 5,462 feet and runs just over two miles in length with an average gradient of 27 percent. Skiers build up average speeds of 60 mph as they navigate a number of bumpy and icy sections.

The Hahnenkamm will be broadcast live on UniversalSports.com on Saturday.

John Harrington, a member of the gold medal-winning U.S. hockey team at the 1980 Winter Olympics in Lake Placid, N.Y., has been selected by the Slovenian Hockey Association to coach Slovenia’s national team in its bid to qualify for the 2010 Games in Vancouver.

Harrington will coach the Slovenian team at the final Olympic qualification tournament Feb. 5-8 in Hanover, Germany. Slovenia will compete against host Germany, Austria and Japan.

The Slovenian Hockey Association will determine whether Harrington remains as coach after the tournament.

Harrington is a four-time winner of the NCAA Coach of the Year award during his U.S. college coaching stint at Saint John’s University in Minnesota from 1993-2008. He is currently a professional hockey coach in Europe.

…Former World Curling Federation Honorary Vice President Elizabeth Paterson-Brown died on Jan. 13. Paterson-Brown was a respected longtime international curling official, serving as WCF vice president from 1990-94. She was also president of the Ladies Branch of the Royal Caledonian Curling Club from 1987-88 and was an honorary vice presidentInternational Luge Federation President Josef Fendt (second from right) and other FIL officials held a meeting with athletes at the PEWO World Cup on natural track in Umhausen, Austria. (International Luge Federation)of the Royal Club at the time of her death. She received the WCF’s World Curling Freytag Award in 1996 and was awarded the Member of the Order of the British Empire.

… Switzerland is expecting to take its biggest team to the 2010 Winter Olympics in Vancouver as it looks to surpass the 130-athlete contingent it sent to the 2006 Games in Turin. Swiss Olympic team head Werner Ausburger stated that the country is also aiming to match its medal tally of 14 from 2006 at the 2010 Games. The Swiss team won five golds, four silvers and five bronze to rank eighth in the standings in Turin. The Swiss Olympic Committee is providing $4.2 million to its 14 winter sports federations to prepare for the 2010 Winter Games.

…The Jamaica Bobsleigh Federation has received a contribution of $15,000 from the country’s Sports Development Foundation to help in preparation for the 2010 Winter Olympics. The Jamaica bobsled team achieved considerable media attention and fame when it made its Winter Olympics debut at the 1988 Games in Calgary, Alberta.

…An eight-member Pakistani skiing team has arrived in Austria to begin a nine-week training program in preparation for the 2010 Winter Olympics. Pakistan Ski Federation President Shahid Lateef says Pakistan will attempt to qualify skiers for the Winter Games for the first time.