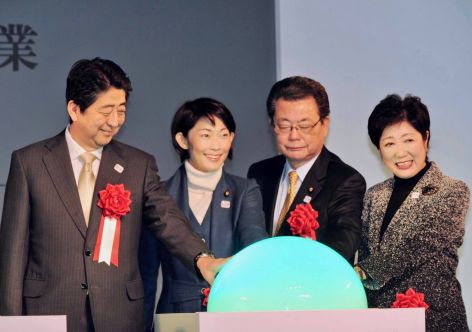 (ATR) Construction of the centerpiece of the Tokyo 2020 Olympic Games is now underway.

Japan’s new National Stadium is being built on the site of the country’s original Olympic Stadium used for the Tokyo 1964 Summer Games.

Organizers of the Tokyo 2020 Games, Tokyo Governor Yuriko Koike, Japanese Sports Council president Kazumi Ohigashi and Japanese Prime Minister Shinzo Abe gathered at the site that was demolished in May 2015 to prepare for the new stadium. The leaders inaugurated the construction of the next Olympic Stadium by placing their hands on a rotating sphere of the Olympic colors.

Construction on the 60,000 seat stadium is beginning 14 months behind schedule after the original design by Zaha Hadid was scrapped due to inflating cost projections.

The new version by architect Kengo Kuma uses a wooden lattice design that is meant to compliment the wooded area surrounding the stadium and is projected at $1.3 billion. Governor Koike complimented the design and its lesser budget and environmental impact.

"Tokyo 2020 games are the first that will apply Olympic Agenda 2020 that focuses on environmental sustainability," Koike said. "The new National Stadium will be our main symbol of this Agenda 2020 principle as our primary venue."

"The new National Stadium is described as athlete first and it provides the best universal design in the world, in harmony with our environment and Japanese identity," Prime Minister Abe added.

The stadium is expected to be completed in December 2019, approximately seven months before the Games begin on July 24.

Reported by Hironori Hashimoto in Tokyo and written by Kevin Nutley.