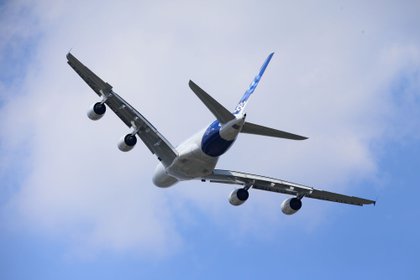 An Airbus SAS A380 super jumbo performs a flying display on day two of the 51st International Paris Air Show in Paris, France, on Tuesday, June 16, 2015.

(Bloomberg) -- France is looking at extending state support for Airbus SE and other aerospace firms through 2024 after the planemaker reined in production plans amid concern that new coronavirus strains will stall a recovery in travel.

“We will do everything to save our aerospace industry,” Finance Minister Bruno Le Maire said Friday ahead of a meeting with Airbus Chief Executive Officer Guillaume Faury.

That could include prolonging a dedicated investment fund beyond next year to “allow the sector to recover,” he said. Le Maire also suggested the possibility of granting extensions for reimbursing the biggest state-backed loans, like those funding programs such as Airbus’s A350 jets.

Le Maire spoke on a visit to Airbus’s headquarters in Toulouse following a week of negative news for aviation companies as resurgent Covid-19 infections prompt a slew of new travel restrictions. Airbus responded by slowing a ramp-up in single-aisle jet production, marking a retreat from the optimism shown in October when it told suppliers to expect a sharp increase in build rates.

The French government will maintain a “whatever-it-takes” policy to save jobs and provide financial backing for aerospace suppliers, including diversification into other industries, Le Maire said, adding that the sector is considered strategically vital to the economy, like Air France-KLM.

The airline’s Dutch arm said Thursday it would cut as many as 1,000 more jobs because a recovery will take longer than expected. The Netherlands is implementing tougher curbs on travel starting Saturday, while France announced that from Sunday, entry to its territory will require a negative PCR test taken within 72 hours.

Deutsche Lufthansa AG, Europe’s biggest airline, said on Friday that passengers must wear medical-grade synthetic face masks on its flights from Feb. 1, with coverings made out of materials like cotton no longer permitted.

Travelers will also have to wear the higher standard masks while transiting through Germany’s airports, the BDL association, which represents the country’s airports and airlines, said, citing new government rules on lockdowns.

Portugal will halt flights to and from Britain from midnight Friday as the government seeks to reduce contagion risks associated with a Covid-19 variant that emerged in the U.K., Prime Minister Antonio Costa said in Lisbon. The move came after Britain barred Portuguese services to minimize the threat from a strain of the virus first detected in Brazil.