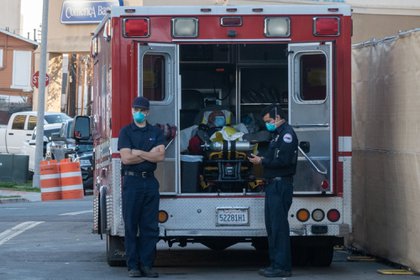 EMTs wait with a patient inside an ambulance outside the ER of a hospital in San Diego, California.

(Bloomberg) -- Covid-19 deaths are likely to climb by at least another 80,000 in the next four weeks, new forecasts show, as many states fumble through the first stages of the vaccine rollout.

The U.S. will add more than 3,000 deaths a week, pushing the cumulative toll to about 459,100 by early February, according to the latest forecast from the University of Massachusetts’s Reich Lab, which is based on models collected in collaboration with the U.S. Centers for Disease Control and Prevention.

The forecasts come after thousands of people gathered for protests in Washington last week that led to a violent storming of the U.S. Capitol and numerous members of Congress testing positive for Covid-19. On Monday night, large crowds gathered to celebrate the University of Alabama’s football championship in Tuscaloosa.

The seven-day average for U.S. Covid deaths is already hovering near a record of more than 3,200 a day, according to Johns Hopkins University data. Deaths, which lag infections by weeks and can take longer to get reported, are around all-time highs in every region except the Midwest, where viral prevalence has begun to recede somewhat.

The country posted 208,826 Covid-19 cases on Monday, pushing the seven-day average to a record 256,820, Johns Hopkins data shows. Current hospitalizations with the virus aren’t rising nearly as fast as they had been, but they’re still close to an all-time high.

According to Covid Tracking Project data: