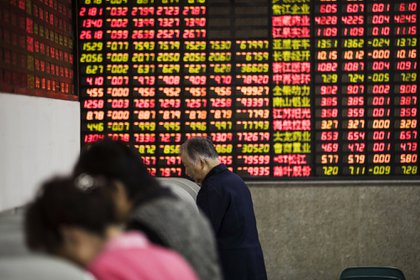 Investors stand at trading terminals in front of electronic stock boards at a securities brokerage in Shanghai, China, on Friday, Oct. 13, 2017. A number of economic indicators show "stabilized and stronger growth" and the momentum of a 6.9 percent expansion in the first six months of 2017 "may continue in the second half," People's Bank of China Governor Zhou Xiaochuan said. Photographer: Qilai Shen/Bloomberg

(Bloomberg) -- Having slumped under the weight of a U.S. executive order, China’s three major telecommunications companies are on the rebound in Hong Kong -- supported by mainland cash.

China Mobile Ltd. led the gains Monday for the country’s wireless majors, rising as much as 8.4%. Its shares, along with those of China Telecom Corp. and China Unicom Hong Kong Ltd. declined last week as index firms said they’d remove them from their gauges to comply with U.S. sanctions, and the New York Stock Exchange said it would delist them.

On Friday they were among the most actively traded through the stock connect. Mainland investors bought a net HK$11 billion ($1.4 billion) of China Mobile shares, the most among all companies listed in the city, according to the latest available data from Hong Kong’s exchange. Semiconductor Manufacturing International Corp., also among Friday’s biggest net buys, has seen its stock price jump 38% over the past four sessions.

“The net buying of China Mobile last week has been so strong and I have never seen it on a scale like this before,” said Castor Pang, head of research at Core Pacific-Yamaichi International Hong Kong.

Strong flows were seen continuing Monday, with mainland traders buying a net HK$12 billion of Hong Kong shares through trading links as of 11:14 a.m., according to data compiled by Bloomberg.

Recent declines among some stocks identified by Washington as having military ties have made valuations attractive, said Kevin Chen, analyst at China Merchants Securities HK Co. “A lot of investors are ramping up to buy them at a very low price now, as this opportunity seldom appears. They are too cheap.” China Mobile, for example, is trading at around 7 times forward earnings, compared to around 12 times a year ago.

Relentless levels of mainland money have given Hong Kong stocks resilience in the face of political upheaval and abrupt setbacks. The city last year found itself in the crossfire of U.S.-China political tensions, amplified by the sweeping national-security legislation imposed by Beijing. That sparked the biggest stock crash in 12 years and raised concerns over possible capital outflows. But the inflows keep coming.