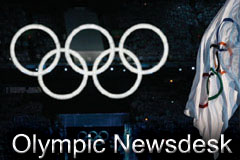 Former Salt Lake City Olympics CEO Mitt Romney – the presumptive Republican nominee for U.S. President – says he plans to be in London for the open of the 2012 Games.

As has been the case for every Olympics since Salt Lake City, Romney has attended a few days of each one along with wife Ann. He is accorded a credential by the IOC as an honored guest, customary for leaders of past Olympic organizing committees.

There were no details available yet from London 2012 on arrangements for Romney’s London visit.

With the withdrawal of other contenders for the Republican nomination in the past month and Romney’s sweep this week of primary votes in five states, the ex-SLOC chief is on his way to an unchallenged GOP nomination. The Republican National Convention will take place in Tampa, Florida starting Aug. 27.

If he wins the November general election, Romney would be the first OCOG CEO to become a head of state.

The Black Sea resort was originally slated to hold the 11th annual convention, but Sochi 2014 had agreed to switch it to the city on the Baltic Sea "in order not to interfere with the extensive testing program for the Games in 2013".

The convention is scheduled for May 26 to 31 next year.

"We could not be happier about the prospect of holding the convention in the great city of Saint Petersburg next year," SportAccord Convention chairman Hein Verbruggen said Wednesday.

"This decision has been under discussion with our Russian partners for a long time and we are pleased to be able to confirm Saint Petersburg as our 2013 host."

The 10th anniversary edition of SportAccord in Québec City next month is a sell-out.

Bob Costas will headline NBC’s coverage of the 2012 Olympics, his 10th overall Games and ninth as primetime host.

USA’s media rights holder also revealed Thursday that Al Michaels – responsible for the famous "Do you believe in miracles?" call at Lake Placid 1980 – will return alongside newcomer Dan Patrick for live weekday and weekend broadcasts from London.

Fans of modern pentathlon can hone in on the sport in a whole new way ahead of the London Olympics.

Thanks to the introduction of laser pistols for the combined event, visitors to Pentathlon.org can track exactly where each shot hits the target, a significant upgrade over the old "hit or miss" statistic.

"More often than not you can see how accurately the world’s best athletes are shooting, which is phenomenal when you take into account that they are basically sprinting 1,000m between each set of shooting," says the International Modern Pentathlon Union.

Laser pistols made their Olympic debut at the Singapore 2010 YOG and will be in use at the 2012 Summer Games.

Registration is now open for the 2012 West Coast Pin Collectors’ show hosted by the Pacific Pin Club Society. The two-day event invites pin collectors, traders, sellers and the public. The show will take place at the Capital Hill Community Hall on Saturday, May 19 and Sunday, May 20.

Roger Mosey, the BBC's director of London 2012, reveals on his blog he will have 765 accredited staff covering the London 2012 Olympics, a big increase on the 493 BBC employees who reported on Beijing 2008.

Reuters reports that social media is "gold" for worldwide Olympic sponsors such as Samsung, Coca-Cola and Procter & Gamble.