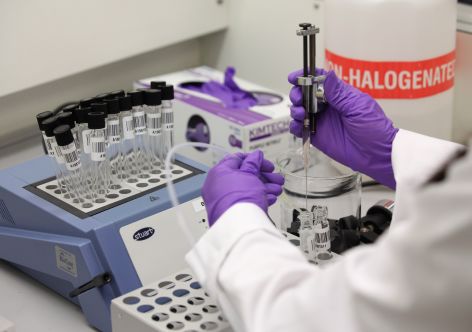 HARLOW, ENGLAND - JANUARY 19: An analyst prepares a sample for testing in the anti-doping laboratory which will test athlete?s samples from the London 2012 Games on January 19, 2012 in Harlow, England. The facility, which will be provided by GSK and operated by King?s College London, will test over 6250 samples throughout the Olympic and Paralympic Games. Over 150 anti-doping scientists will work in the laboratory, which measures the size of seven tennis courts, 24 hours a day. (Photo by Oli Scarff/Getty Images)

If accreditation is granted, the Brazilian laboratory would be allowed to test athletes for test events leading up to the Rio Olympics next year.

The laboratory has recently been approved to analyze biological passports of athletes. WADA will vote on the lab’s re-accreditation on May 13 in Montreal, Canada.

LBCD is located at the Rio de Janeiro Federal University (UFRJ) as part of the chemistry institute. The lab has been operational since 1989 but has moved into a new building.

LBCD previously held accreditation with the IOC and WADA from 2002 to 2013, the first Latin American lab to earn such accreditation. However, LBCD lost accreditation due to using outdated equipment for testing blind samples sent by WADA.

The certification to test biological passports of athletes and completely updated facilities and equipment leave the Brazilian government confident the lab will earn re-accreditation from WADA, according to a statement from their Ministry of Sport.

If approved, the LBCD would be one of 33 accredited laboratories by WADA and could conduct all doping tests for Brazilian sport, most notably the 2016 Summer Games.