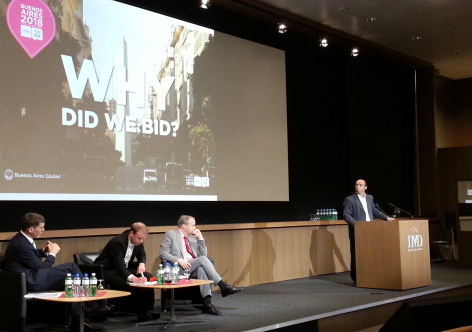 (ATR) Officials from the Boston bid to become the U.S. Olympic Committee’s candidate city for the 2024 Games were quietly networking at the Lausanne conference organized by the World Union of Olympic Cities.

Sennett told ATR they were using the conference to learn lessons from other Olympic cities, as the bid moves to a critical stage. Voicing confidence in the city’s Olympic vision, she indicated that the bid book was coming together nicely ahead of its submission to the USOC later this month.

The other U.S. cities hoping to be named as the USOC’s 2024 candidate in January – Los Angeles, San Francisco and Washington D.C. – did not send delegations to the summit. David Simon, president of the Los Angeles Sports Council and a regular at the World Union of Olympic Cities events for many years, is not attached to the LA bid and declined comment about the city’s prospects.

Francisco Irarràzaval, head of Buenos Aires 2018 Youth Olympics, revealed to delegates that the city's YOG bid was conceived in a pub when he and friends were a little bit drunk, although he joked that not that many drinks had been taken.

The city’s under-secretary of sport gave a presentation outlining why Buenos Aires had bid for the Youth Games, saying it was viewed as a catalyst for the transformation of the city "to overcome north-south fragmentation and inequality."

"We thought it was an enormous and incredible opportunity not just to be a smart city but through sport to connect people," he told delegates.

Officials from Busan in South Korea are starting out early in their quest to land the 2028 Summer Olympics.

Three officials from the sports promotion division of Busan Metropolitan City were among the 200 delegates in attendance. Their PR stunt involved handing out nail clippers bearing the slogan Dynamic Busan. The tiny plastic bags were labeled with the message, "The best destination for the 2028 Olympics is Busan."

Busan hosted the 2002 Asian Games and was one of the host cities of the FIFA World Cup co-hosted by Japan and Korea the same year.

Representatives from Sapporo in Japan, host of the 1972 Winter Games, told ATR that the city is considering a bid for the 2026 or 2030 Winter Olympics.

Niki Kazushige, Sapporo’s director general of sports affairs, and Atsushi Fukushima, manager of international relations at the Japanese Olympic Committee, were keen to inform ATR that the city will next year join the World Union of Olympic Cities. Sapporo will host the 2015 World Women’s Curling Championships and co-host the 2017 Asian Winter Games with Obihiro.

Making no mention of U.S. swim star by name or his recent problems – Phelps has a drink-driving trial in December and is currently serving a six-month ban from swimming – Bowman spoke about some of the rules that deliver successful athletes. In what may have been a thinly-veiled reference to Phelps, he said at one point: "I’m always asking my athletes, 'Is today going to be an ordeal or an adventure?' It’s up to you."

As Beijing 2022 Winter Olympic bid chiefs laid out their vision to the ANOC general assembly in Bangkok, representatives from the city’s Olympic Development Corporation were busy networking at the summit. However, the two female officials said they were not there to promote the bid. There were no representatives at the event from Almaty, the Kazakhstan city bidding for the 2022 Games.