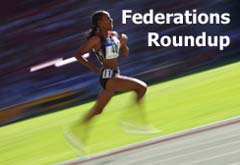 Russian billionaire Alisher Usmanov promises to rejuvenate fencing and bring in up to $60 million in sponsorship over the next four years after being elected president of the International Fencing Federation (FIE).

The steel magnate defeated French incumbent Rene Roch by 66 votes to 61 at the FIE congress in Paris on Saturday. Roch, who has been FIE chief since 1992, had defeated Usmanov in a similar vote four years ago. The congress also elected four new members to the FIE executive committee.

A former sabre fencer, Usmanov presides over the Russian Fencing Federation and European Fencing Confederation. Known in business circles as “the hard man of Russia," the Uzbek-born oligarch is majority shareholder of Metalloinvest and is said to be Russia's 18th richest man. He is also the largest shareholder in London's Arsenal football club.

In his nomination statement for the presidency, Usmanov pledged to shake up the sport and ensure the FIE plays a leading role among world sports federations from 2009 to 2012. “Above all, we need stability, and we need an intensive focus on developments to ensure a healthy future for fencing,” he said.

“We need a well-thought-out, strategic approach to the development of fencing worldwide. And that can only be done on a basis of sufficient financial resources, and a well-developed infrastructure.”

“We want to revive fencing, to bring it back to a leading position at the Olympics,” he added.

Usmanov will push for all 12 fencing disciplines to be included on the Olympics program.

“We will get to the core of this issue primarily through increasing the credibility of fencing, its status and popularity. We have all the resources to address this critical challenge to our sport,” he said.

Under the four-year action plan set out at the congress, he vowed to bring in $50 to $60 million in sponsorship deals, meaning the FIE will have an annual budget of $12 to $15 million. This is reportedly about triple the yearly budget under Roch's leadership.

As well as providing improved organization, training and finance of national fencing federations and establishing an international department for coaches, Usmanov plans to organize new tournaments to raise the sport's global profile.

Proposals for the annual Masters competition would bring together eight of the best athletes in each weapon category. It will probably be staged at the end of the season in a high profile international venue.

Roch was gracious in defeat after being ousted by Usmanov. “He has a lot of money and that's good for the people of fencing,” he told Around the Rings. “It's wonderful for me because now I have many things to do outside fencing.”

But Roch said he had turned down the opportunity to be honorary president under Usmanov's administration of the federation.

Usmanov is expected to attend the next general assembly of the Association of Summer Olympic International Federations, which convenes during the week of SportAccord in Denver, March 23 to 27.

USA Track & Field (USATF) elected a new president and enacted a restructuring of its board of directors at the USATF Annual Meeting in Reno, Nev.last weekend.

Stephanie Hightower, USATF’s women’s track and field committee chair, was elected to a four-year term as the organization’s president.

After the first round of voting, Hightower led with 304 votes, with USATF Vice President Dee Jensen in second place with 263 votes and former Vice President Bob Bowman eliminated after finishing third with 58 votes.

Hightower was the winner in therunoff election with 328 votes, finishing ahead of Jensen (300 votes).

“I’m excited about the opportunity to serve this organization,” Hightower said. “We have a multitude of opportunities that lie before us and I’m just happy that I’ll have the opportunity to work with the USATF family and move the sport into the 21st century.”

USA Track& Field also voted to reduce of the size of its board of directors from 31 to 15 members. Among the 15 seats are the president, seats nominated by each of the six USATF divisions (high performance, long distance running, general competition, youth, coaches and officials), three seats for athletes, three independent seats, one for 5E organizations (groups such as the NCAA and NAIA) and one seat for USATF’s IAAF council member.

“This was a historic vote, culminating reorganization efforts that had their roots as far back as the mid-1980s,” Roe said. “It is about improving the organization. Our own board, the group that will be remade by this legislation – the group that will remove most of itself with these changes – recognized this fact. They put their own self-interest aside to act in the interest of the sport. I congratulate our membership on making these extraordinary changes final.”

The USATF membership voted on the changes after the board unanimously approved the changes at its October meeting in Indianapolis. It was approved by a voice vote of the membership by more than the necessary two-thirds majority.

Peter Vidmar, a gold-medal winner at the 1984 Summer Olympics in Los Angeles, and fellow 1984 gold medalist Mary Lou Retton were elected to the USA Gymnastics Board of Directors during the first meeting of the newly restructured group in Indianapolis last weekend.

“Peter’s experience as a gymnast at every level and as a successful business person provides a strong combination for the chairman for USA Gymnastics,” USA Gymnastics President Steve Penny said. “He understands every facet of the sport and is a recognized leader within the gymnastics community. Combined with the other members of the board, USA Gymnastics is in a strong position for moving forward in the increasingly demanding sports world.”

Vidmar returns to the board of directors after having served previously from 1985-1992. He also served on the organization’s executive committee from 1996-2000.

This will be the first time on the board for Retton, who became the first U.S. woman to earn a gold medal in gymnastics when she won in 1984.

The USA Gymnastics Board of Directors adopted its new governance structure that includes a 20-person board in Nov. 2007.

FIBA discussed the status of Turkey as host for the 2010 World Championship at its annual Central Board meeting in Geneva, Switzerland last weekend.

The Central Board expressed serious concerns about Turkey’s feasibility plan for the 2010 World Championship after receiving detailed reports on the competition and will make a decision on the matter at the next meeting of the board May 23-24, 2009 in Geneva.

The FIBA Central Board also scheduled the inaugural World Cup Championship, which will be an annual event featuring eight of the best basketball clubs in the world, for October 2010.

The participating clubs will be each of the five FIBA Zone Club Champion teams and the runners-up from the FIBA Europe and the FIBA Americas Zone, with the final club to be an invited team by the host city.

The Chinese cities of Chengdu and Nanjing are expected to be among the contenders for the 2010 competition.

The Central Board also approved the new World Anti-Doping Association (WADA) Code for 2009.

With reporting from Mark Bisson and Greg Oshust.