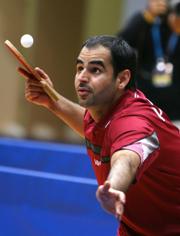 (ATR) The president of the International Table Tennis Federation tells Around the Rings that a landmark tournament in Qatar next month marks a major step forward for his sport.

Ten nations were unveiled Thursday as participants in the Peace and Sport Table Tennis Cup, which will include men’s and women’s doubles matches with mixed-nation teams.

The tournament was conceived to encourage dialogue and reconciliation among nations that have experienced conflict. Play takes place Nov. 21 and 22 in Doha.

"This is a great opportunity to put politics aside and co-exist through sport in an atmosphere of cooperation and friendly competition," ITTF chief Adham Sharara told ATR.

"Ping Pong Diplomacy succeeded before and was the catalyst to thaw the relations between the USA and China. That was 40 years ago, why not re-use the same successful formula? Let's call it 'Ping Pong Diplomacy version 2.0', and there will be much more to come."

Boasting a prize fund of $100,000 for the winners, it's organized by the Qatar Table Tennis Association with support from the National Olympic Committee of Qatar under the leadership of the ITTF and the guidance of Peace and Sport.

Commenting on similar ITTF events ahead, Sharara said: "We will hold together with the Peace and Sport organization, and gracious hosts such as Qatar and other peace-loving nations, a series of events at which countries with political conflicts in the past, or even presently, can come together and dialogue in an atmosphere of peace and understanding while taking part in a sports competition."

"In this case table tennis is the vehicle and peace is the purpose."

Ping Pong Diplomacy refers to the visit by a U.S. table tennis team to China in1971 amid the Cold War to play friendly matches. It was the catalyst for U.S. President Richard Nixon’s visit to China the following year and paved the way for the two countries to restore diplomatic relations.

Joel Bouzou, president and founder of Peace and Sport, believes the inaugural table tennis event "will foster communication and political reconciliation at the highest level, since diplomats and government representatives from the 10 participating nations are invited to watch the tournament".

Sharara and Bouzou announced details of the competition at the fifth annual Peace and Sport International Forum currently taking place in Monaco.