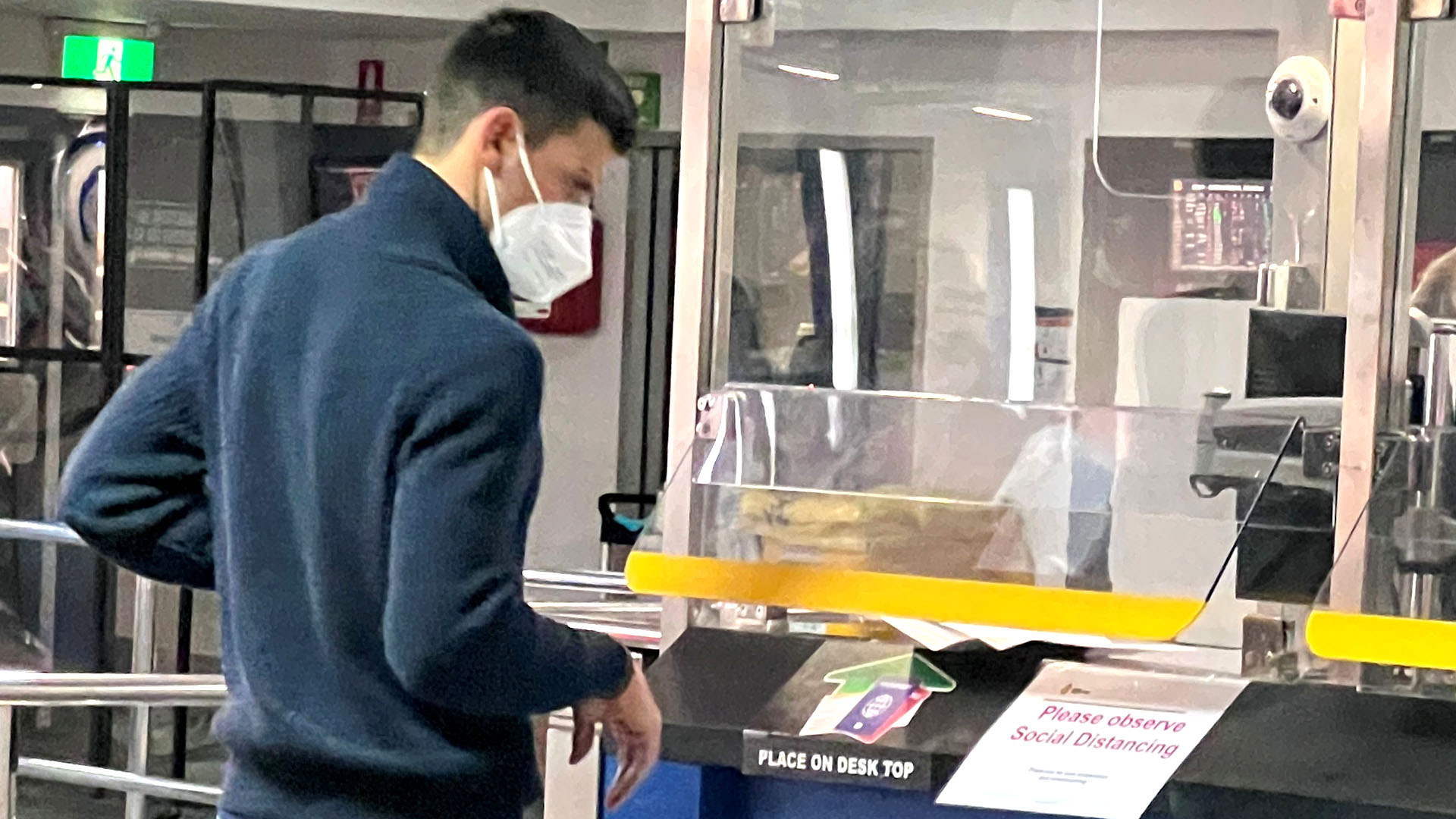 Serbian tennis player Novak Djokovic stands at a booth of the Australian Border Force at the airport in Melbourne, Australia, January 5, 2022. Picture taken January 5, 2022, in this photograph obtained January 6, 2022. via REUTERS ATTENTION EDITORS - THIS IMAGE HAS BEEN SUPPLIED BY A THIRD PARTY.

I look into Novak Djokovic’s eyes and try to better understand who he is. Why he is the way he is.

- Does being a Serb put extra pressure on you, the need, perhaps, to be even nicer and more likable than the average player?

The question had Djokovic fidgeting on the brown leather couch at the Monte Carlo Country Club, more motivated than nervous at it.

“To be honest, it’s a good question, because I remember when I was traveling with my father playing junior tournaments all over the world. Most of the time, when we said we were from Serbia, people became very cautious and cautious about following up with us.”

The memory hurts Djokovic, you can see in his gesture that it made him suffer.

The war in the former Yugoslavia is a very serious matter for Djokovic and his family. In his environment, stories are intertwined that, like those of any war, are not pleasant. The best known is of those nights as a child in his aunt’s bomb shelter, but there are many more. And the rejection he experienced once the war was over still weighs heavily on him.

“The feeling was very ugly. First, because I don’t think anyone should be prejudiced about people, either because of where they come from or their religion. But I also understood it, because most of the international press had been writing negatively about Serbia. It started that way, but with time people came to value me and my family, to understand that what we do, we do with a clean heart and conscience. People respected me for my success, and that was important, to allow people to see my true personality and that the Serbian people are good and can be good.”

That interview, in April 2013 in Monte Carlo, allowed me to finish tracing the psychological profile of an extraordinary sportsman, of a man who, if one crosses him in a hallway, smiles and greets in English, Italian, German, Spanish or French, always adapting itself to the language of the person that it meets by chance and fleetingly.

A man who knows how to please, but who is calculating even when he seems spontaneous.

A man, as the journalist Lauren Collins once wrote in The New Yorker, who “gives the impression of being the person who in a magic show would die to be chosen to go on stage.”

That’s Novak Djokovic, number one in world tennis and in contention to be the most successful player of all time.

His relatives, in the midst of the staggering scandal involving the Serb and the Australian government, prefer to describe him differently.

Djokovic is a “revolutionary who is changing the world,” said Dijana, Djokovic’s mother.

“Jesus was crucified on the cross ... but he is still alive among us. They are trying to crucify and belittle Novak and throw him to his knees (...). We Serbs are a proud European people. Throughout history, we have never attacked anyone, we only defended ourselves. That is what Novak, our pride, our Serb, the pride of the entire free world, is now doing,” said his father Srdjan.

And what does Djokovic himself think?

“God sees everything. Moral and ethics as the greatest ideals are the shining stars towards spiritual ascension. My grace is spiritual and theirs is material wealth.”

This is the message that, according to his father, the world number one sent him after arriving at the hotel in downtown Melbourne where the Australian federal authorities are holding him for failing to provide documentation to justify not having been vaccinated against COVID-19.

When the answer to public health issues involves Serbian pride, spirituality, religion and the crucifixion of Jesus, something very strange is going on.

Djokovic became the ideal scapegoat - his mother is right about that - for an Australian government that has been accumulating high doses of popular discontent over draconian anti-COVID-19 measures. After initial doubts, Prime Minister Scott Morrison saw the opportunity and did not let it pass: Djokovic would not enter Australia, a country where the state and federal levels of government frequently clash. 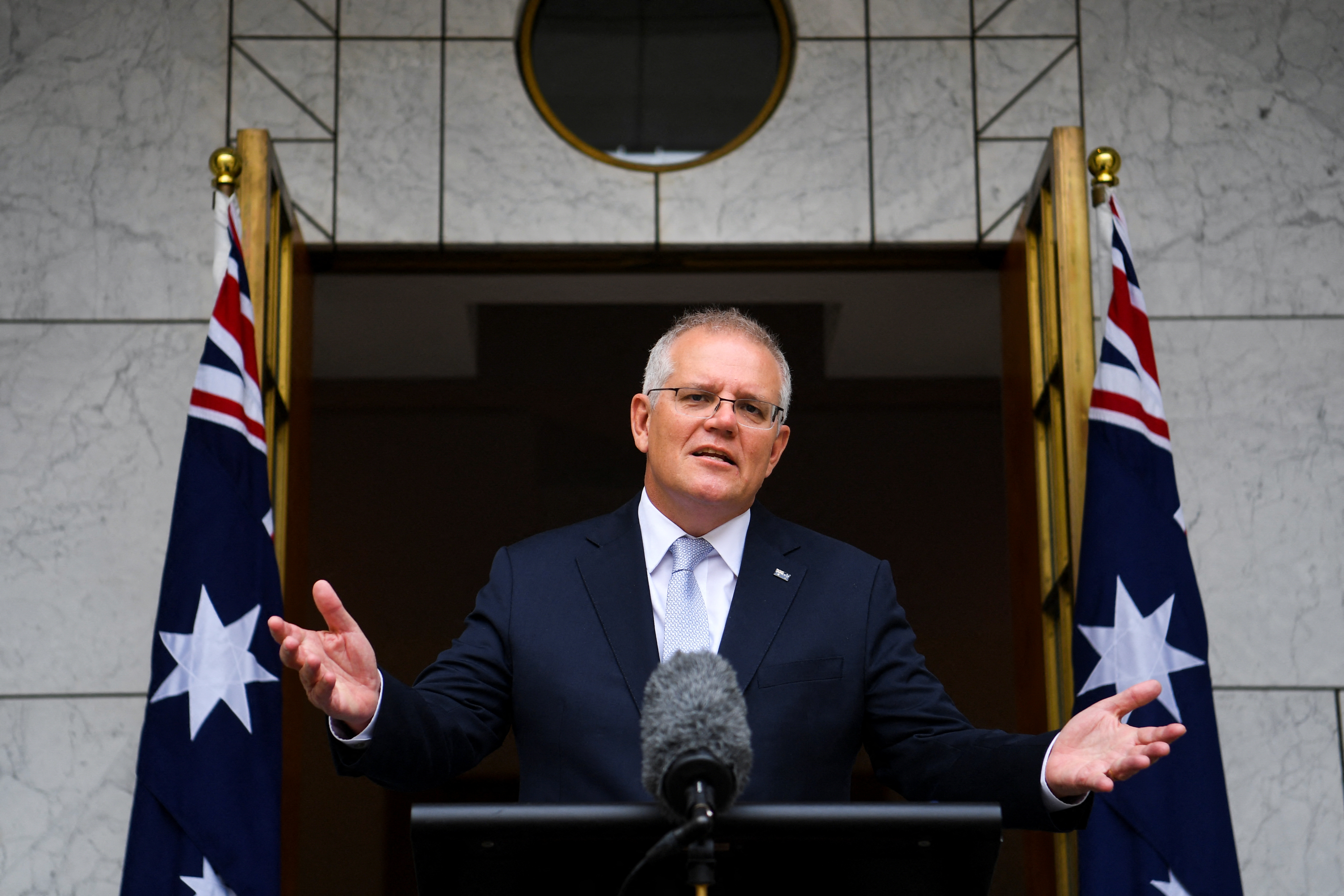 Australian Prime Minister Scott Morrison speaks during a news conference at Parliament House, in Canberra, Australia January 6, 2022. AAP Image/Lukas Coch via REUTERS ATTENTION EDITORS - THIS IMAGE WAS PROVIDED BY A THIRD PARTY. NO RESALES. NO ARCHIVE. AUSTRALIA OUT. NEW ZEALAND OUT

Thus, the Serb is in limbo, a limbo he entered of his own free will after nearly two years of statements and attitudes that turned him into one of the leaders of the anti-vaccine movement worldwide.

He made it clear in April 2020, during a chat on social networks: “I am personally opposed to vaccines and I would not want to be forced to be vaccinated to travel (...) But what will I do if it becomes mandatory? I will have to make a decision, I have my own thoughts on the subject.”

Those phrases cost him harsh criticism in a world that longed for the arrival of a vaccine. Djokovic tried to clarify his position, and he did: he does not believe in vaccines.

“I’m not an expert, but I want to have the option to choose what’s best for my body. I have an open mind and I’m going to keep researching this issue, because it’s important and it affects all of us.” 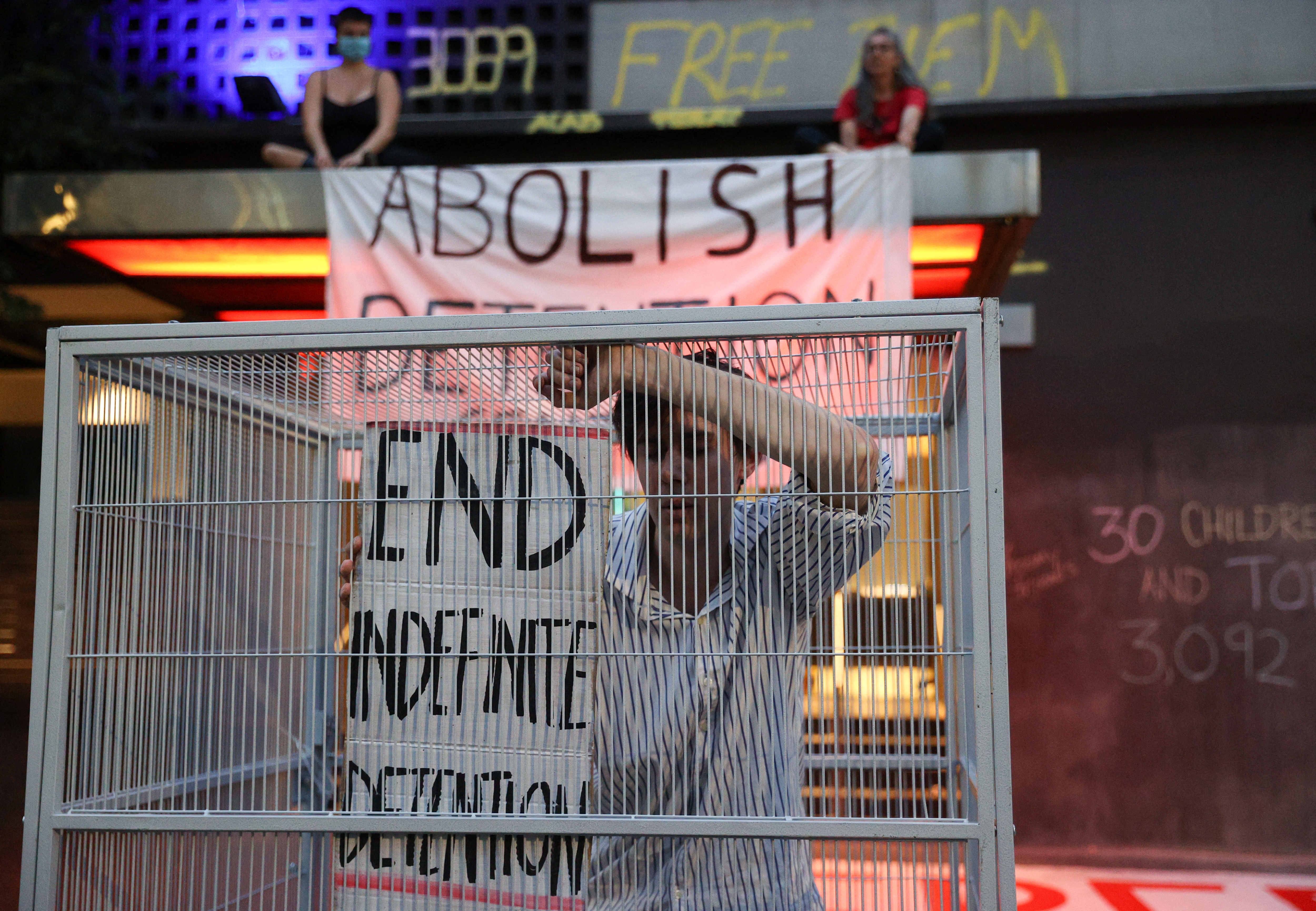 Pro-refugee protestors demonstrate at the Park Hotel, where Serbian tennis player Novak Djokovic is believed to be held while he stays in Australia, in Melbourne, Australia, January 6, 2022. REUTERS/Loren Elliott

So he made it to January 2022, unvaccinated, but happy about the exemption Tennis Australia got from the State of Victoria. He wasn’t counting on the appearance of the federal government in Canberra and Morrison himself - Djokovic can play the Australian Open if the Victorian government deems it so, but whether he enters Australia or not is up to us.

“The rules are the rules,” added the prime minister, leader of a country that has had a very low death toll since the start of the pandemic: just 2,300 people. That is equivalent to 83 deaths per million inhabitants, compared to 1,753 in Serbia and 2,418 in the United States. France, home of another Grand Slam, has 1,707, and the United Kingdom, the land of Wimbledon, 2,178.

It is clear that Australia was very successful in minimizing COVID-19 deaths, albeit at the cost of restrictions so powerful, that sustaining them is increasingly hard. Allowing an anti-vaccine Djokovic into the country was a guarantee that citizen discontent would grow strong.

Djokovic became a matter of Australian domestic politics. Bad news for Craig Tiley, the CEO of Tennis Australia and one of the sport’s most visionary and gentle executives. Without the presence of Roger Federer this year, and with Rafael Nadal returning from injury, Tiley wanted to secure Djokovic: a year ago, the pandemic-affected, spectator-less Australian Open lost over a hundred million dollars. 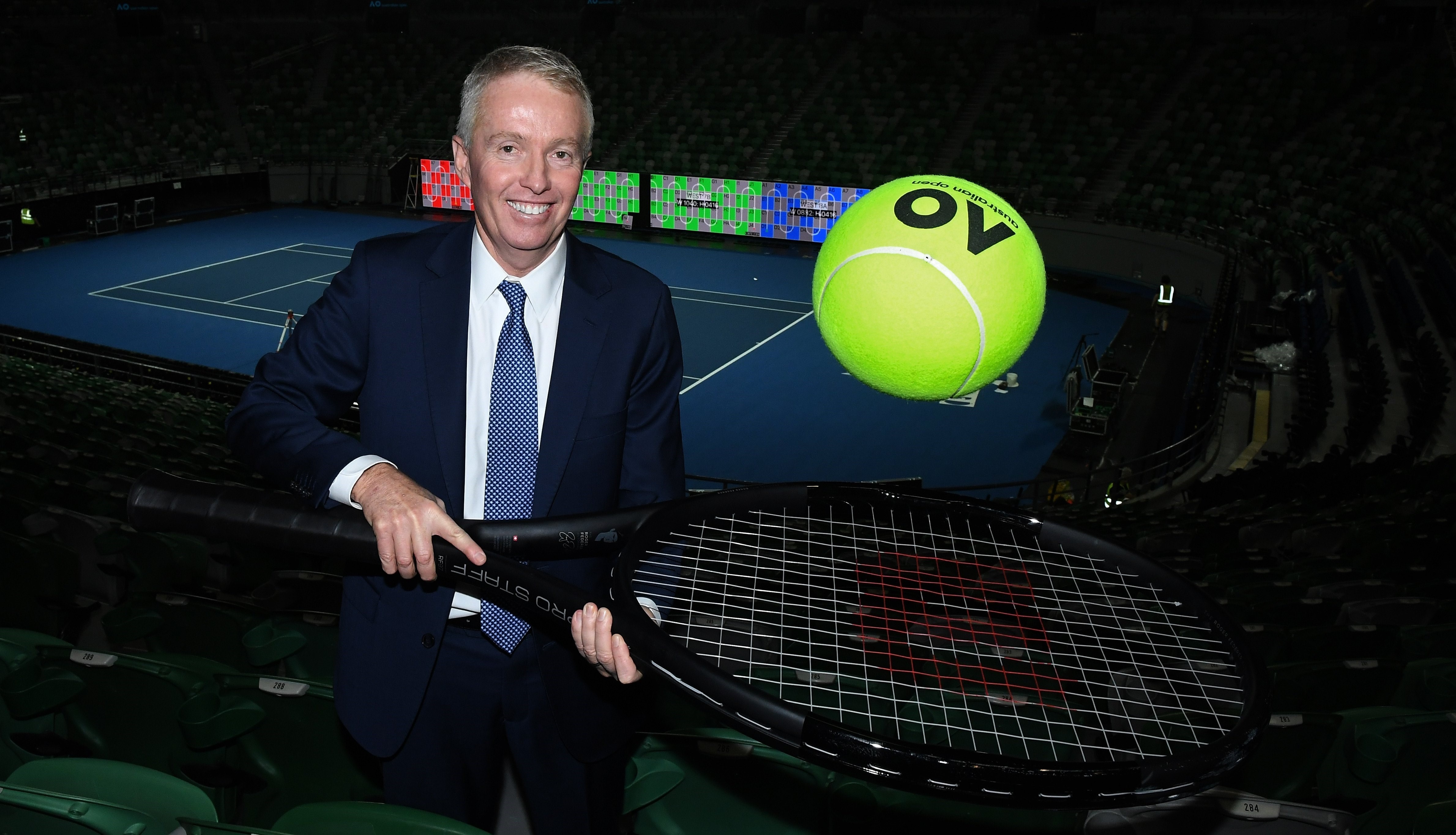 He did not count, however, that the Morrison government would take full advantage of the Serb’s inconsistencies and bypass the Victorian regional administration.

Thus, Djokovic’s future looks complex, even if his lawyers - who are preparing million-dollar lawsuits and injunctions - were to succeed and by some strange alchemy the Serb finally plays the Australian Open.

On the one hand, the scandal involving him - the umpteenth chapter in his career - is pushing Federer and Nadal further and further away from him. The 20-20-20 tiebreaker in terms of Grand Slam titles will no longer be the exclusionary measure for the Serb’s place in history.

On the other, being anti-vaccine is a problem that will haunt him beyond Australia. Emmanuel Macron, President of France, said days ago that his intention is to “piss off” the French who refuse to vaccinate. Let alone if it is a Serb trying to play Roland Garros this May.