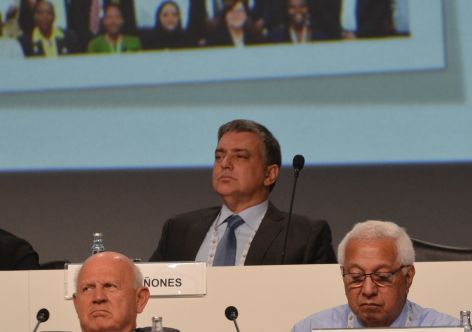 Around the Rings is told that claims by Quinones’ successor Pedro del Rosario are being examined by the Panam Sports Ethics Commission following a tirade by Rosario to conclude the continental association’s general assembly in Prague. There is no timeline for a decision to be rendered.

In a 10-minute speech, Rosario accused Quinones of severe mismanagement and corruption that left the COP in debt. Rosario assumed the role of COP President in June and says he has been trying to pick up the pieces of what he called an organization in disarray.

"When I took up my duties I learned about the tricky, critical and chaotic situation of the Peruvian Olympic Committee," Rosario told leaders of the 41 regional NOCs. "The situation was brought about by my predecessor Jose Quinones and is the result of his management.

Quinones tells ATR he was shocked to hear about the allegations by his successor and that he is misinterpreting the situation.

"The financial obligations of the COP respond to several unfulfilled promises and laws by the past government and not to a bad management on my part," he says. "So much so, when I left the presidency of the COP in January of this year all the salaries of the employees were paid until December of 2016."

Quinones resigned from the COP Presidency in January as a result of a five-year sanction by a Peruvian administrative sport court. He says the sanction is illegal because due process has not been followed and he is appealing the sanction.

He adds that the responsibility of the unpaid debts of the COP lies with the Peruvian government that did not provide funds that were promised for the organization of several sport projects from 2013-2016.

"In 2013 we hosted the Bolivarian Beach Games, the Sport for All Forum and we bid for the Lima 2019 Pan American Games, but then jealousy and ambitions began to flow. Some people realized it was $1 billion project, and they got very involved. This was real political revenge."

Quinones’ presence at the Association of National Olympic Committees General Assembly in Prague sparked the accusations from Rosario. The new COP President wants Quinones to be removed from the ANOC Executive Council and requested a letter be sent from Panam Sports President Neven Ilic to ANOC President Sheikh Ahmad.

"I’m not going to judge him, but when I came to Prague and met this gentleman on the ANOC podium, together with other vice presidents and executives representing the Americas, I felt indignant, because dear friends, I go to COP every day and give my time to try and rectify the situation in which I find the NOC."

ATR is told that no such letter from Ilic has been sent to ANOC leaders and likely won’t be until the Panam Sports Ethics Commission makes a determination. Quinones is eligible to remain on the ANOC Executive Council until 2018, telling ATR he doesn’t think it is necessary to be an NOC leader to help lead ANOC.

"I think that a President position is valuable but is not the only one in the Olympic Movement," he says. "I truly believe that the most import thing in a role with ANOC is the experience and devotion in every single act in favor of the organization."

Quinones says he is happy to cooperate with any ethics inquiry but has not had any contact with Panam Sports or ANOC since the accusations were levied by Rosario.

It seems his spot on the ANOC Executive Council appears safe until the Tokyo 2018 ANOC General Assembly where he could be replaced when elections are held.