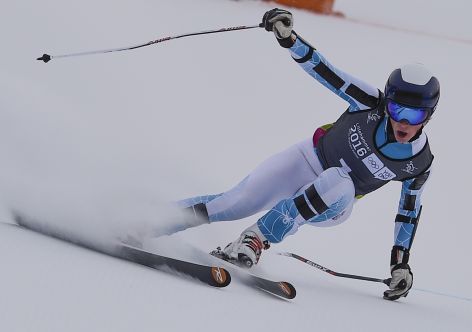 (ATR) As the Youth Olympic Games continue to evolve, many wonder if the event has the capacity to consistently produce future elite-level sporting champions.

Radamus sped to his third gold medal in three races at the Lillehammer YOG, winning the men’s giant slalom by more than a second on Wednesday (Feb. 17).

"It’s been really surreal and there’s nothing I can compare it to," Radamus told Around the Rings of his YOG experience in the Hafjell finish area, shortly after his victory. "It’s something that will stick with me forever."

Radamus had a solid 0.53-second advantage over Italian Pietro Canzio after the first run. With his third gold medal within sight, Radamus demonstrated calm and composure, doubling his lead in the second run and claiming victory by 1.07 seconds.

"It’s been really great to be clicking on this stage and have the success that I’ve had the past few days," Radamus said.

The Vail, Colorado racer – who celebrated his 18th birthday on Feb. 13, the day of the opening ceremony – has suddenly emerged as the biggest rock star of these 2016 Youth Olympic Games.

"It’s a really bizarre feeling being asked for autographs – I just signed some girl’s cheek, which is crazy," Radamus said. "It’s awesome to be recognized for my accomplishments, but I’m just as happy blending in, putting a hoodie over and going to watch the hockey game tonight."

"He looks like Bode," Gisin said, referring to the racing style of the teen-aged skier. "On top of that, he’s such a nice person. I’m really amazed at how humble and sweet he is winning all those medals.

"I’m sure we will hear a lot about him," the Swiss Olympic champion said. "His skiing is fantastic, it’s really Bode-style."

The Italian Canzio – who has won two YOG medals, but fell in his second run on Thursday – complimented his American friend and competitor’s ability.

"He never makes big mistakes – I like his skiing style, because it’s a little bit strange and nothing like we see in Italy, but he goes really fast," Canzio said.

The Norwegian Henrik Thosrby added: "You see in his skiing that he is so comfortable – it’s inspiring to see his race tempo because he is in another league here."

Radamus is the first skier or snowboarder to win three gold medals at the Winter Youth Olympic Games – Lillehammer being the second edition following Innsbruck in 2012. The U.S. ski racer has also won the super-G and alpine combined. He still has the slalom – arguably his best event – and the mixed gender team event remaining. Five gold medals in Lillehammer are a possibility.

"Anything is possible, but I could have ended up tenth every race, so I’m just enjoying the moment right now," Radamus said about chasing more medals.

River’s mother Sara arrived to Norway yesterday, just in time for her to witness her son win his third gold medal. His father Aldo is coming for the final two races on Friday and Saturday.

With his wispy blond hair, charm and infectious smile, Radamus has become a big hit with the ladies.

"I think he is a great skier and he’s pretty handsome also," said one Norwegian female volunteer."

"He’s unexpectedly modest for his age," said Bulgarian television reporter Radina Zhekova. "He has a strong character and he’s calm.

"I already know that he’s going to be a big star."

Reported and written by Brian Pinelli in Lillehammer.