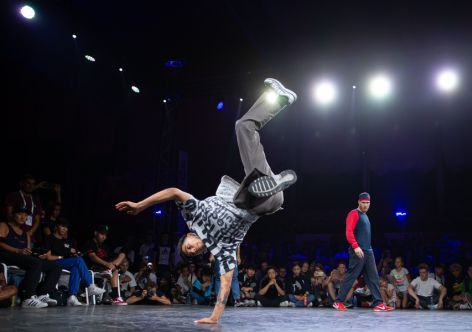 George Washington University student Filip Vachuda offers this analysis of changes to the 2024 Olympic sport program and what they could mean for the future of the Games.

(ATR) On the heels of the IOC Executive Board certifying the Paris 2024 event program, one thing is clear: the Games four years from now will be more inclusive, urban, gender-equal and sustainable than ever before.

Overall, the IOC has made significant improvements to how the Games will be run in future.

But there have also been some questionable additions and missed opportunities, as well as some intriguing discussions about the nature of the Games going forward.

How many is too many?

Cutting the number of quotas, keeping event numbers constant and increasingly relying on existing venues will help minimize debt and disuse of stadiums in host cities.

By removing a substantial number of quotas from boxing and weightlifting, the IOC set a long-awaited precedent of penalizing federations with histories of doping or corrupt governance.

Historic gender parity, meanwhile, will ensure that the Games continue to promote equal opportunities for women, both in sports and the world beyond.

Men’s football remains a major source of gender inequality at the Games, with 16 teams relative to women’s 12. Olympic men’s football is practically a youth event with little real prestige and propping it up harms smaller sports often reliant on the Olympics for exposure.

Reducing the men’s tournament to 12 could have remedied this while saving 72 valuable quotas for other events.

But implementing these goals elsewhere comes at a cost. Room has to be made somewhere, and this time around that meant some events in canoe sprinting and racewalking were dropped.

This is never an easy decision. But canoe sprinters and race walkers will still have opportunities to qualify for the Games in events with other distances. That’s an improvement over the 2020 cycle where removals of C2 canoe slalom and some specialized shooting disciplines shut those athletes out of the Olympics forever.

If cuts must be made – and the IOC wants to protect athletes’ access to the Games -- then removing events that have similar equivalents would be a welcome practice.

There were also some missed opportunities.

Mixed duet synchronized swimming, for instance, would have opened one of two female-only sports to men.

Instead, several more mixed team events were added to the calendar; and while no doubt well-intentioned, it is not obvious how these events increase gender equality or even enhance the Games program in general.

Mixed team competitions often differ little from regular team ones already present in most sports, and in disciplines like judo or sailing, the team dynamic just seems arbitrary.

In fact, having too many mixed team events can dilute the prestige of other contests, especially in athletics or swimming where the same athletes already compete across as many as four events.

Mixed teams may be a novelty that briefly interests younger viewers but focusing on new sports or individual disciplines would expand the reach and variety of the Games further. This also can be done without exponentially increasing quotas.

But any evaluation of 2024’s program must discuss the spinning elephant in the room: breakdancing.

The addition of breaking certainly brings a new, visually exciting dimension to the Games. While it may be unlike anything we’ve seen before, what we consider "sport" has evolved over the years. Disciplines that would be unthinkable today, such as tug-of-war, powerboating or live pigeon shooting have been medal events in past Olympic editions.

Its abrupt inclusion, however, prompts some questions about how sports will be added in future. Despite breaking having had only one federation-sanctioned world championship so far, it took priority over long-established sports globally popular for decades, such as squash.

With breakdancing added solely on the basis of youth appeal, one has to ask -- what next?

Will trendiness take priority over a sport’s level of worldwide development?

Breaking’s inclusion may have opened the door to sports that don’t have a lot of precedent, such as parkour or even esports.

This could be a pro or a con depending on each spectator, but hopefully the current pivot away from legacy sports won’t shut out squash, cricket, or others that are more than deserving of a spot in the Olympics.

While the changes for 2024 do cause uncertainty over what the Games of the future may look like, generally speaking they will entice a wider audience, as well as improve the Games’ efficiency and integrity.

The next couple of Games will undoubtedly be fascinating to watch.

Filip Vachuda is a junior at the George Washington University studying International Affairs and Economics. He is primarily interested in the intersection of sport and politics, as well as the governance of international sports federations.