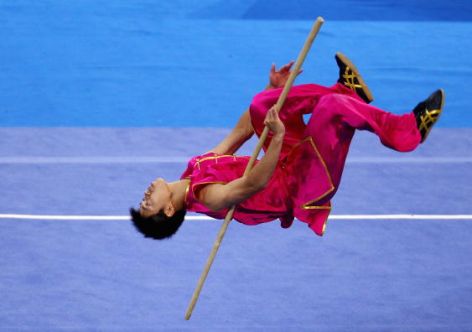 BEIJING - AUGUST 28: Hsu Kai-Kuei of Taiwan competes in men's Wushu nan gun on day one of the Sportaccord Combat Games 2010 at the Olympic Centre Gymnasium on August 28, 2010 in Beijing, China. Scheduled from 28 August to 4 September 2010, the first Combat Games 2010 feature 13 martial arts and combat sports, both Olympic and non-Olympic. (Photo by Feng Li/Getty Images)

(ATR) Marius Vizer tells Around the Rings that SportAccord is focused on its multisport games but vows to revive ambitious plans to create a United World Championships.

His proposal to develop a mega sport event featuring every major international sports federation during campaigning for the SportAccord presidency in May 2013 met with opposition from IOC president Thomas Bach and some federation leaders, who claimed the concept would undermine the Olympics.

Vizer, who is also president of the International Judo Federation, told ATR in April at the SportAccord Convention in Belek, Turkey that he had not abandoned the mega-event idea. He said his organization would wait for the conclusion of the Agenda 2020 process launched by Bach before considering any next steps.

Speaking to ATR in Chelyabinsk, Russia during the recent World Judo Championships, Vizer revealed that he still had faith in winning the support of federations to develop the United World Championships.

"At the moment, the target of SportAccord is to develop the four multisport games, the convention and consolidate the position of IFs and their development strategies," Vizer told ATR.

He also hopes that the Olympic Agenda 2020 reforms to the Olympics expected at the IOC Extraordinary Session in Monaco in December will reduce restrictions on where the SportAccord Convention can be held. Currently, there are limitations linked to Olympic bid cities.

"According to the United World Championships, which I have proposed, I am thinking when the time will come and all international federations will be interested to support the event without exception, I am ready," he said.

"In our strategy, we cannot go in competition with the Olympic Games, but in the way to support the Olympic Movement, the athletes, the national federations and the whole sports movement."

Vizer told ATR that SportAccord is working with Kazakhstan to stage the next Combat Games.

The beach games are in partnership with the Association of National Olympic Committees. Vizer said his organization was working with ANOC president Sheikh Ahmad and his team to find a location for the Games to be staged in 2017.

He confirmed that the World Urban Games are still planned for 2016 after the Rio 2016 Olympics. Two European cities are vying for hosting rights, he added, declining to name them.

Vizer also commented on the choice of Sochi to stage the 2015 SportAccord Convention, highlighting the Olympic legacy infrastructure of the Black Sea resort as a major benefit for the conference’s new aspirations.

"I am convinced that Sochi will be a good organizer in accordance with our target to increase the complexity and capacity of the convention," he said.

"We are working very hard to make our long-term planning for the next years [of conventions]," Vizer added.