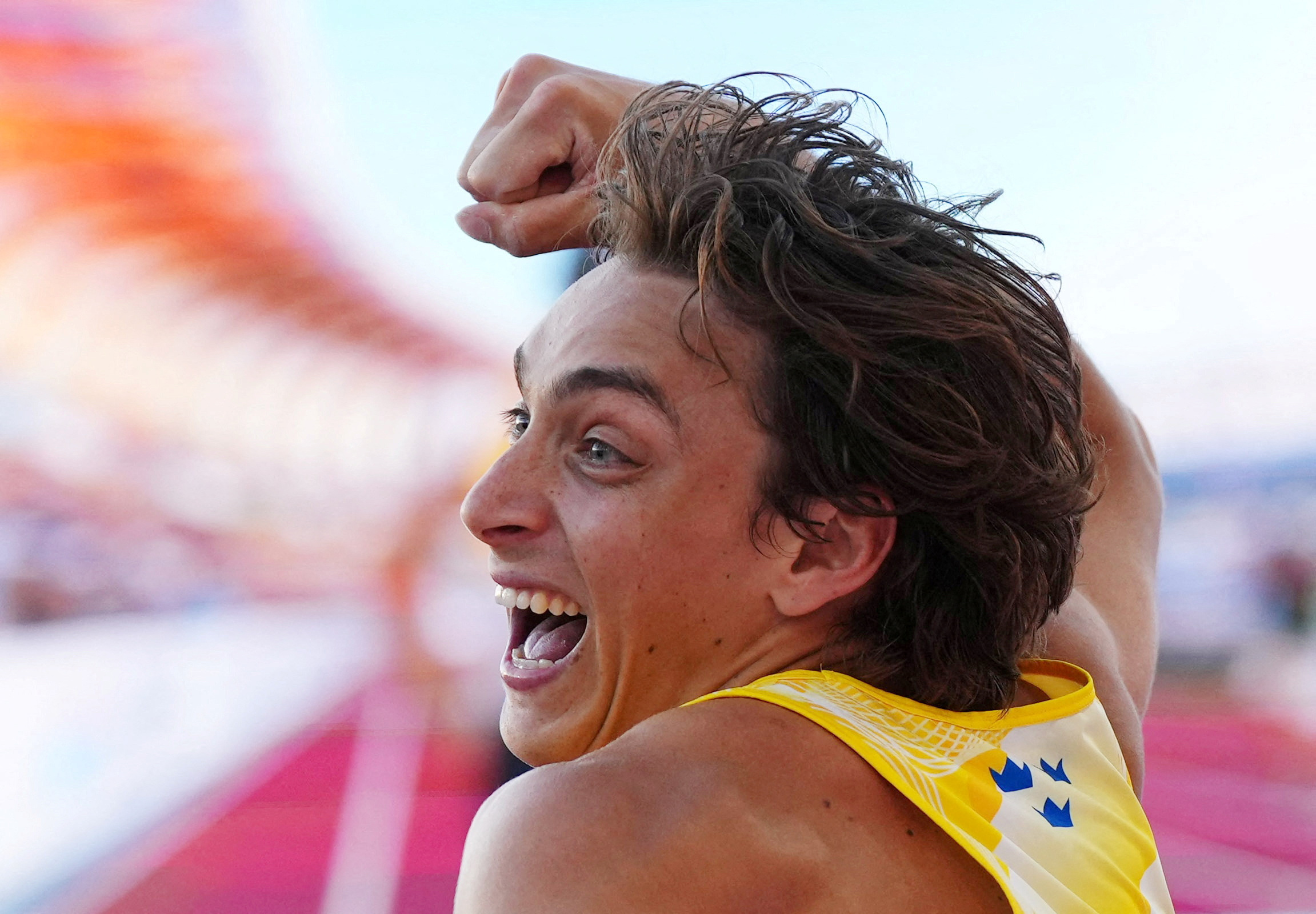 In a stadium once dubbed the “Witches Cauldron,” fans will be expecting magic from pole vault wizard Armand “Mondo” Duplantis as the Diamond League resumes Saturday.

The Silesia region of Poland stepped in when Diamond League meets in Shanghai and Shenzhen could not be held due to Chinese travel restrictions and strict quarantine requirements.

Dos Santos of Brazil fielded a question about which athlete he expected to perform the best at the Kamila Skolimowska Memorial meet.

“I pick Duplantis,” he said. “Yes, definitely. He’s amazing. Every time he jumps he broke the world record, so he’s easy.”

“I don’t know about every time, but thank you for that,” said Duplantis, who also holds the world indoor record. “No pressure.”

The Swedish star has the luxury of raising the world record by a centimeter at a time, which earns a hefty bonus. He has broken the world record five times since February 2020 and received $100,000 for his most recent world record at Oregon22. 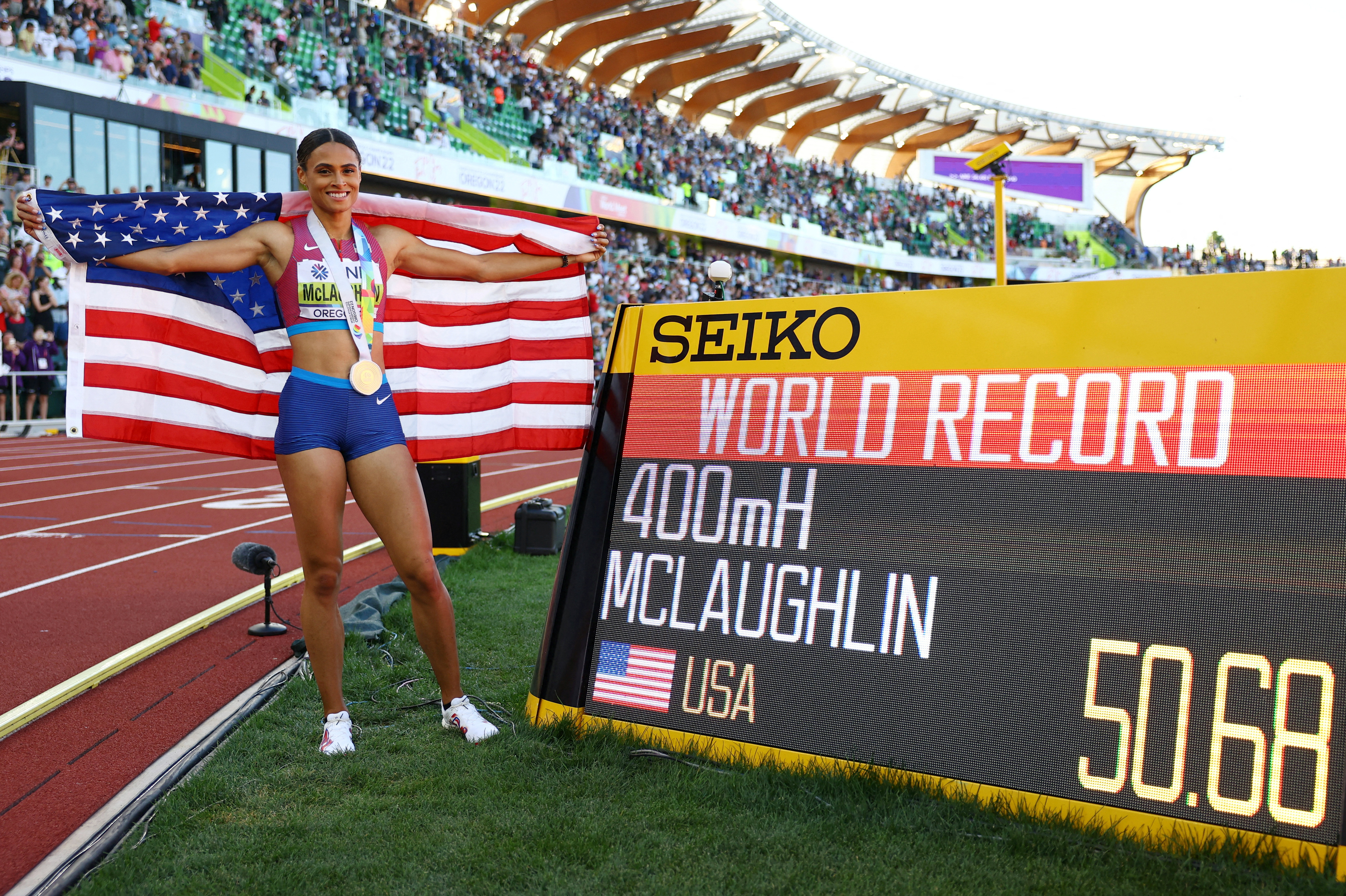 Sydney McLaughlin, the 400-meter hurdler who is also a threat to break the world record every time she races a final, will return to the Diamond League circuit for the first time in three years at a meet in Monaco on Wednesday.

Many athletes are seeking points to qualify for the Diamond League final in Zurich Sept. 7-8.

However, there are no Diamond League points in the men’s pole vault in Silesia. Duplantis has already secured his spot in the Diamond League Final. Although the field is stacked with Chris Nilsen of the USA, Ernest John Obiena of the Phillipines, Renaud Lavillenie of France, Thiago Braz of Brazil and Piotr Lisek of Poland, Duplantis’ only real competition is himself.

“There’s really no such thing as a perfect jump,” said the Louisiana-raised vaulter, noting there are “always things you can improve upon.”

Duplantis said he feels like he can push to “get those few extra centimeters out of yourself. I’m really enjoying everything right now — training, traveling and competitions. If I wasn’t having such a good time with the process and striving to push the boundaries of what I’m capable of, maybe it’d be a different situation. The motivation is the least of my concerns.”

And what is humanly possible in the pole vault? “I don’t know,” Duplantis said, “but I hope I’m the person that finds it out.” 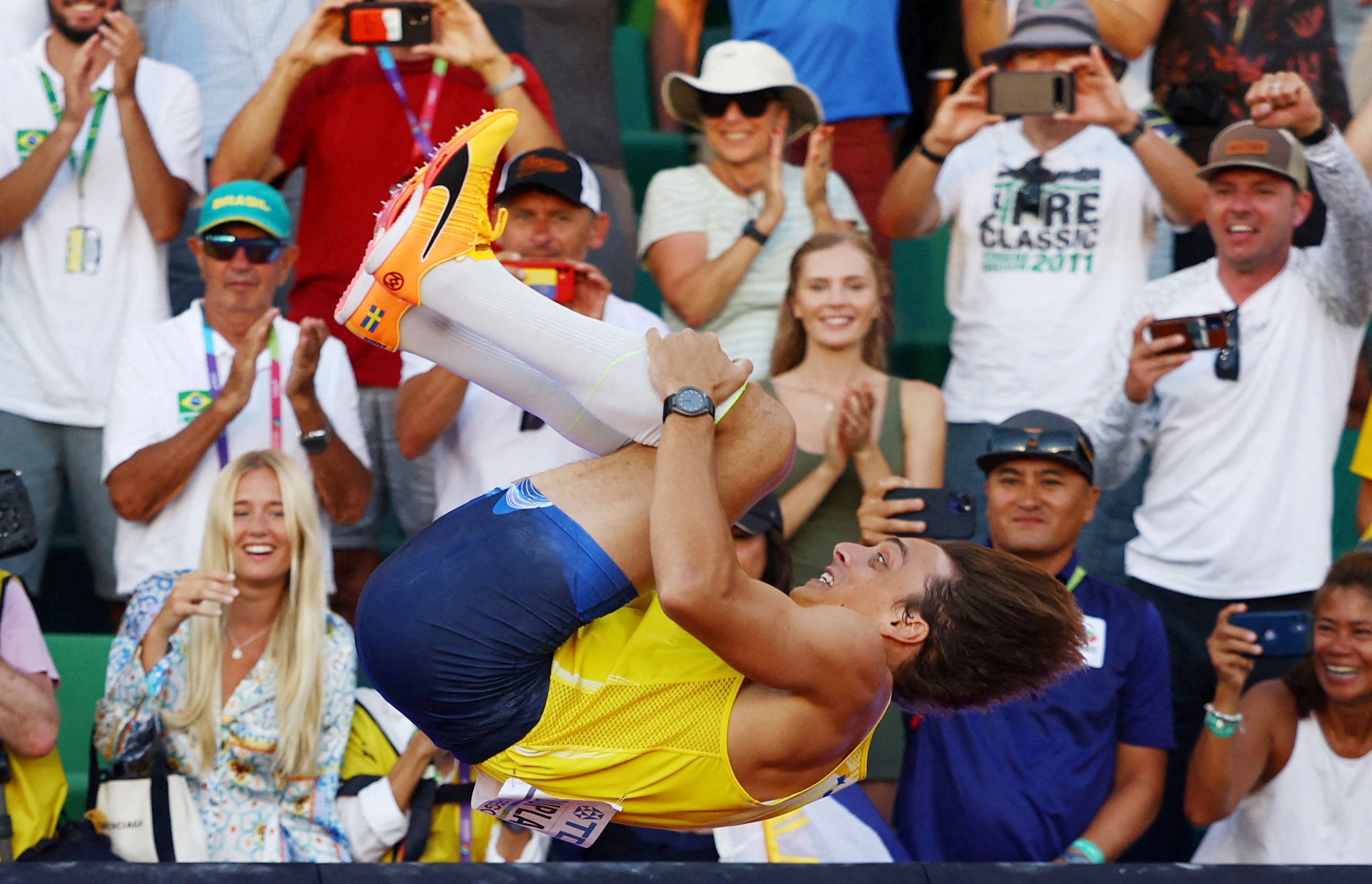 He also displayed his athleticism with a front flip after his world record in Eugene. “That was one of these kind of situations where it was spur of the moment,” he said. “I absolutely had no plan of doing any sort of flip of any kind. Honestly, I feel that if you plan that you start to overthink it and probably botch it.”

The other athletes in Silesia had different predictions for the top performer at the meet. 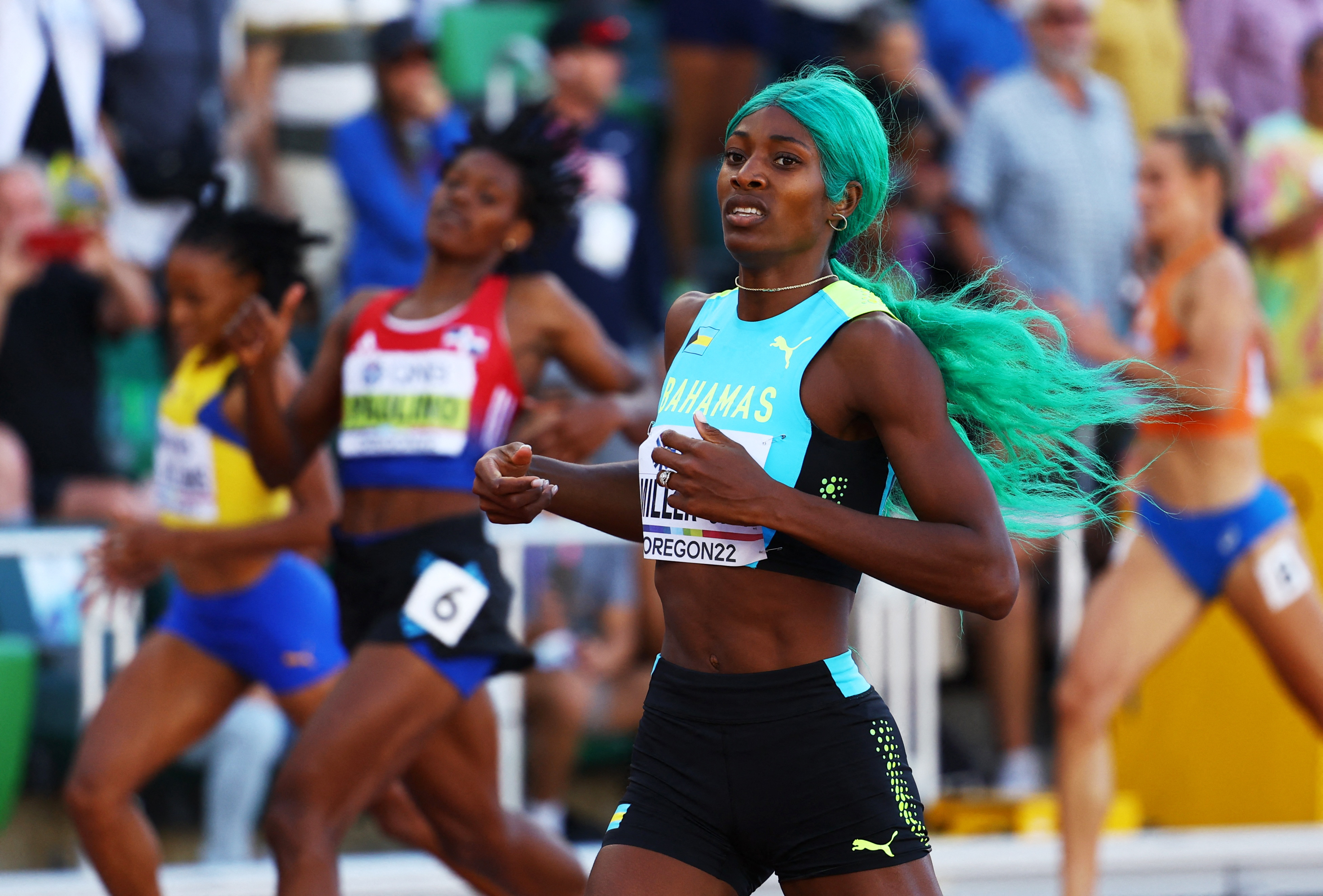 “I pick me,” said Miller-Uibo, the Olympic and world champion in the 400 meters who will drop down to 200 meters.

She’ll face Jackson, the newly-minted world champion who ran the second-fastest time in history in Eugene of 21.45 seconds.

“I’m going with Shericka,” said Fraser-Pryce. “Running five rounds is hard. A sixth attempt to run 21.4 is just spectacular. I’m very interested and excited to see what she does with just one round.”

“I go with myself, definitely,” said Jackson. “The 200 will be the most competitive event here.”

Gabby Jackson of the U.S., the Olympic bronze medalist who was injured and did not compete at Worlds, will return to action in Silesia.

Miller-Uibo said the 200 is her “first love.” “I’ve done just about everything in the 400 and it’s time to let loose now and enjoy the rest of the season,” she said.

Fraser-Pryce, who has won five world titles in the 100 meters, including 2022, will race against a field that includes Aleia Hobbs, Melissa Jefferson, Twanisha Terry and Marie-Jose Ta Lou.

“I’m driven, I’m passionate and from a long time I believed I could run 10.6 and that was what kept me going, kept me motivated, and I wanted to have that under my belt,” said Fraser-Pryce. “I continued to stay focused and to work. I know I have all the accomplishments and it feels good, but for me every year I accomplish something I always think that the next year I can do better. So why not challenge myself to see how far I can take it?” 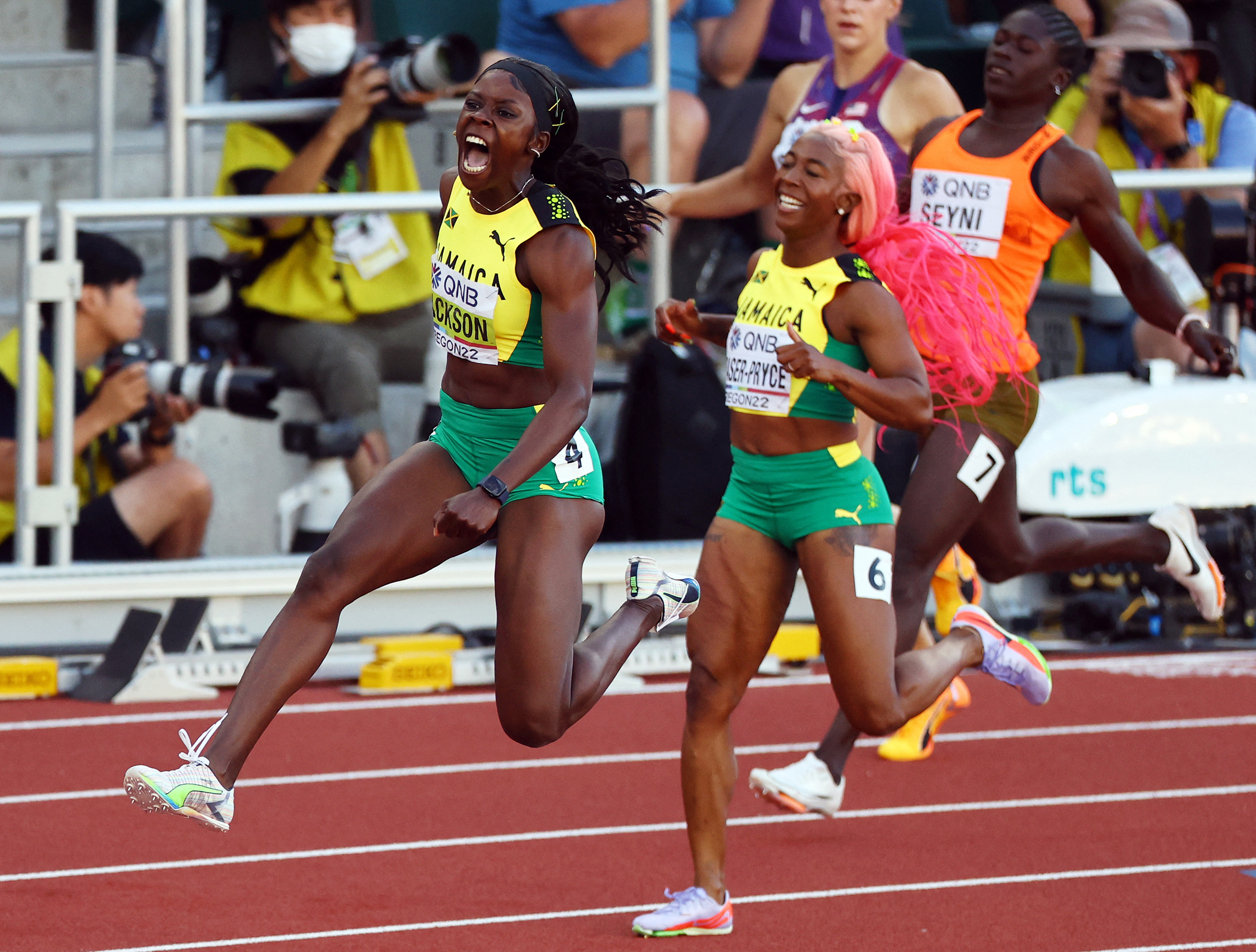 The 35-year-old plans to compete through the Paris 2024 Olympics and already has 23 global medals.

“I’ve actually lost two of my medals,” Fraser-Pryce said. “I don’t know where they are, but I moved and I’m still looking for them so hopefully I will find them soon.”

The men’s 400 features Michael Norman, the new world champion from the U.S., in another showdown with world silver medalist Kirani James of Grenada.

Camacho-Quinn, the Olympic champ and world bronze medalist will be up against world silver medalist Keni Harrison and two other Americans who crashed out of worlds, Alaysha Johnson and Nia Ali.

One notable absence: Tobi Amusan, who set the stunning world record of 12.12 seconds in the event, is competing for Nigeria at the Commonwealth Games this weekend.

At the Diamond League meet in Monaco, McLaughlin will attempt to lower her own world record for the fifth time. She won the Olympic gold medal in July 2021 with a time of 51.90 seconds and has since gone 51.46, 51.41 and a dazzling 50.68 in Eugene.

American record holder Noah Lyles, a two-time world champion, will be tested by silver medalist Kenny Bednarek and bronze medalist Erriyon Knighton in the 200 as they look for another sweep. 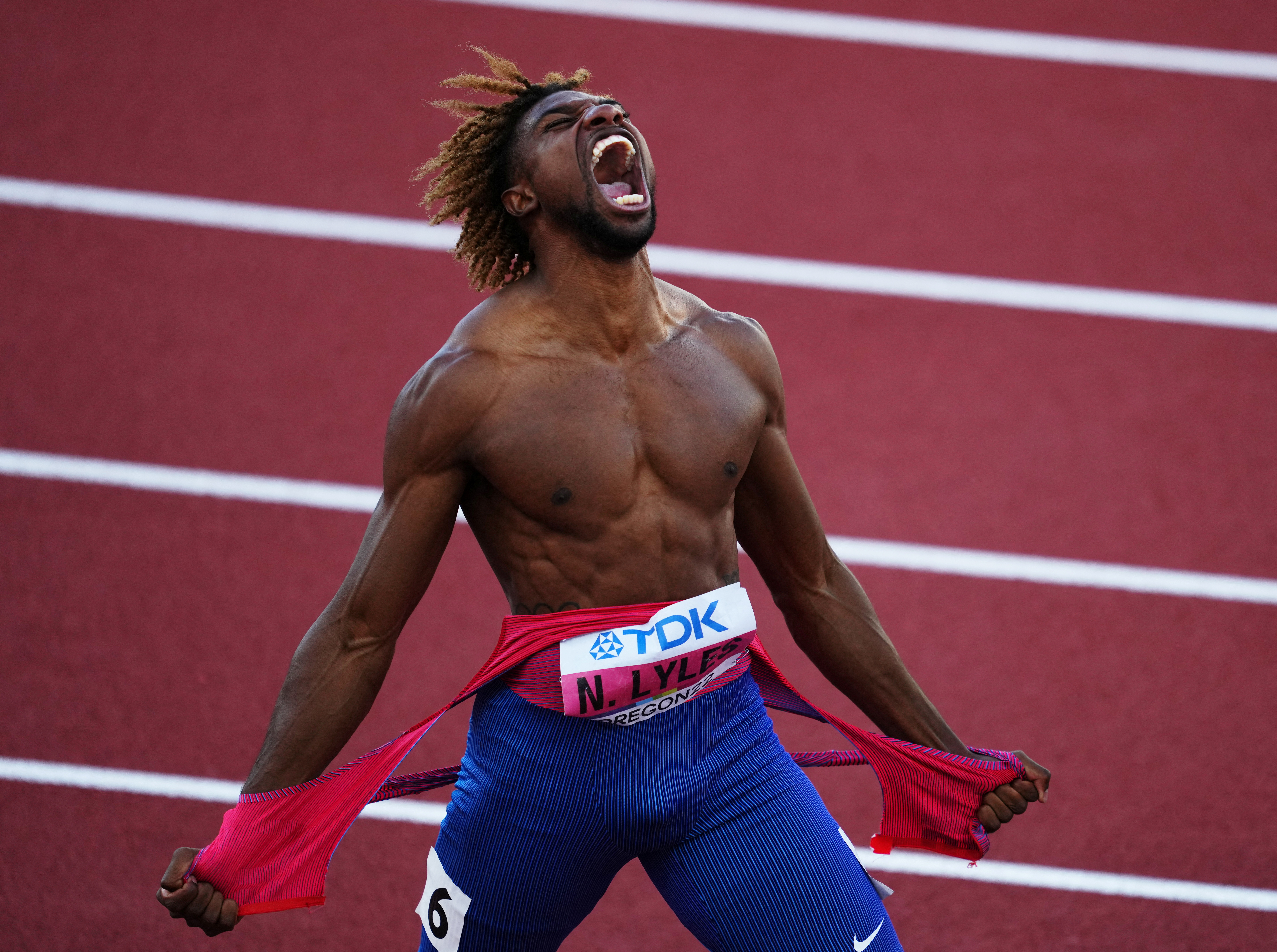 In the 110 hurdles, two-time world champ Grant Holloway will face Hansle Parchment of Jamaica, the Olympic champion who cramped up before the final in Eugene and could not compete. Other world champs include Faith Kipyegon of Kenya in the 1,500 and Yulimar Rojas of Venezuela in the triple jump.

Fraser-Pryce and Jackson are also expected to travel from Poland to Monaco, with both running the 100.

Jackson is the only athlete who has won world championships medals in the 100, 200 and 400. “I am so good at all events,” she said. “For me, I love challenges. If next year I decide to go back to the 400, I know I’ll do pretty well. I’m not giving up any events as yet. All events are up for grabs.”