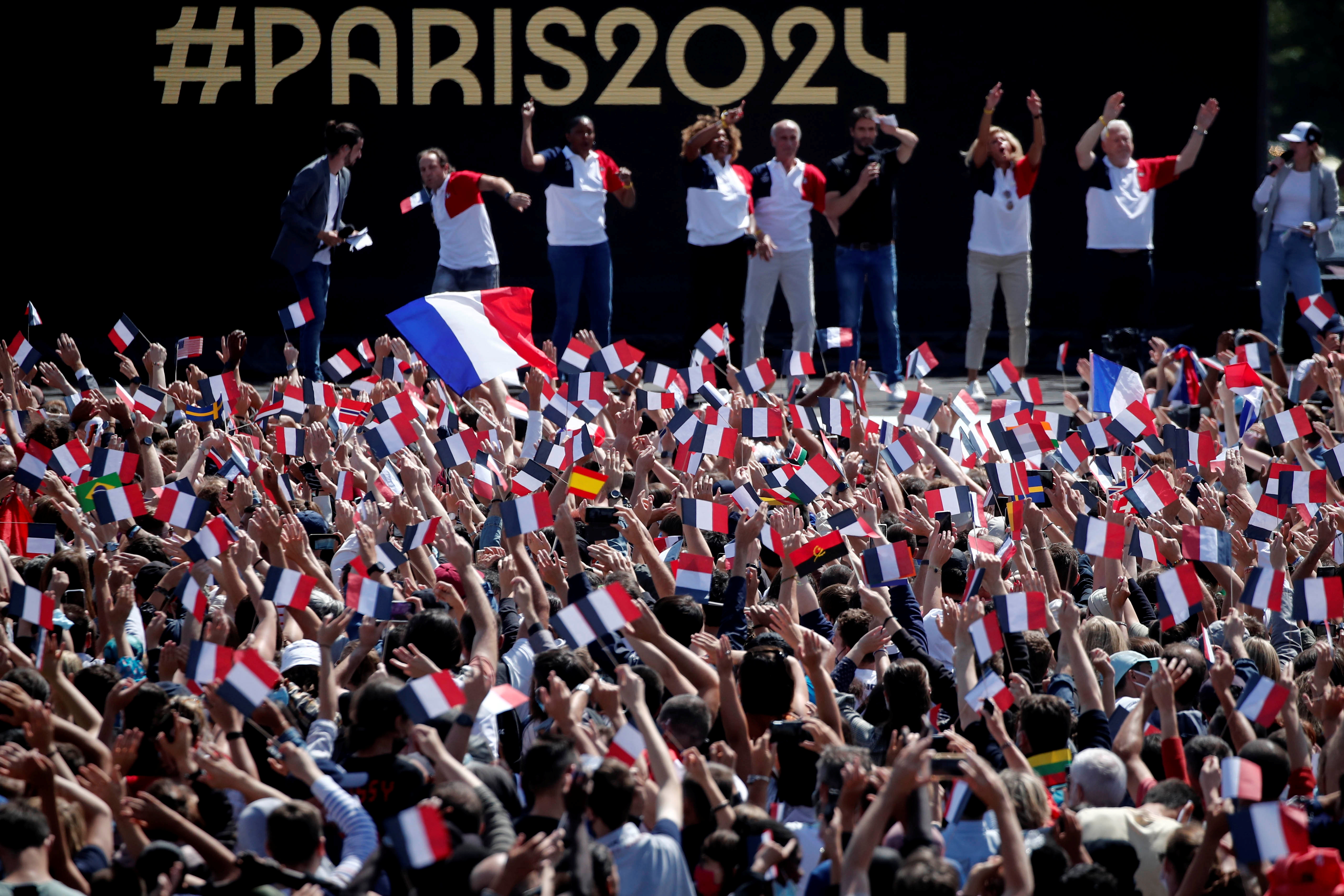 People gather at Paris' Olympics fan zone to watch the closing ceremony of the Tokyo games, in front of the Eiffel Tower, at Trocadero Gardens in Paris, France, August 8, 2021. REUTERS/Benoit Tessier

In a hopeful precursor to the next Summer Olympics in three years, thousands of spectators gathered near the Eiffel Tower to welcome the handover of the Olympic flag to Paris.

Among the more than 5,000 people in attendance at the Trocadero Gardens were French medalists who had already returned from Tokyo as well as Paris 2024 president Tony Estanguet. 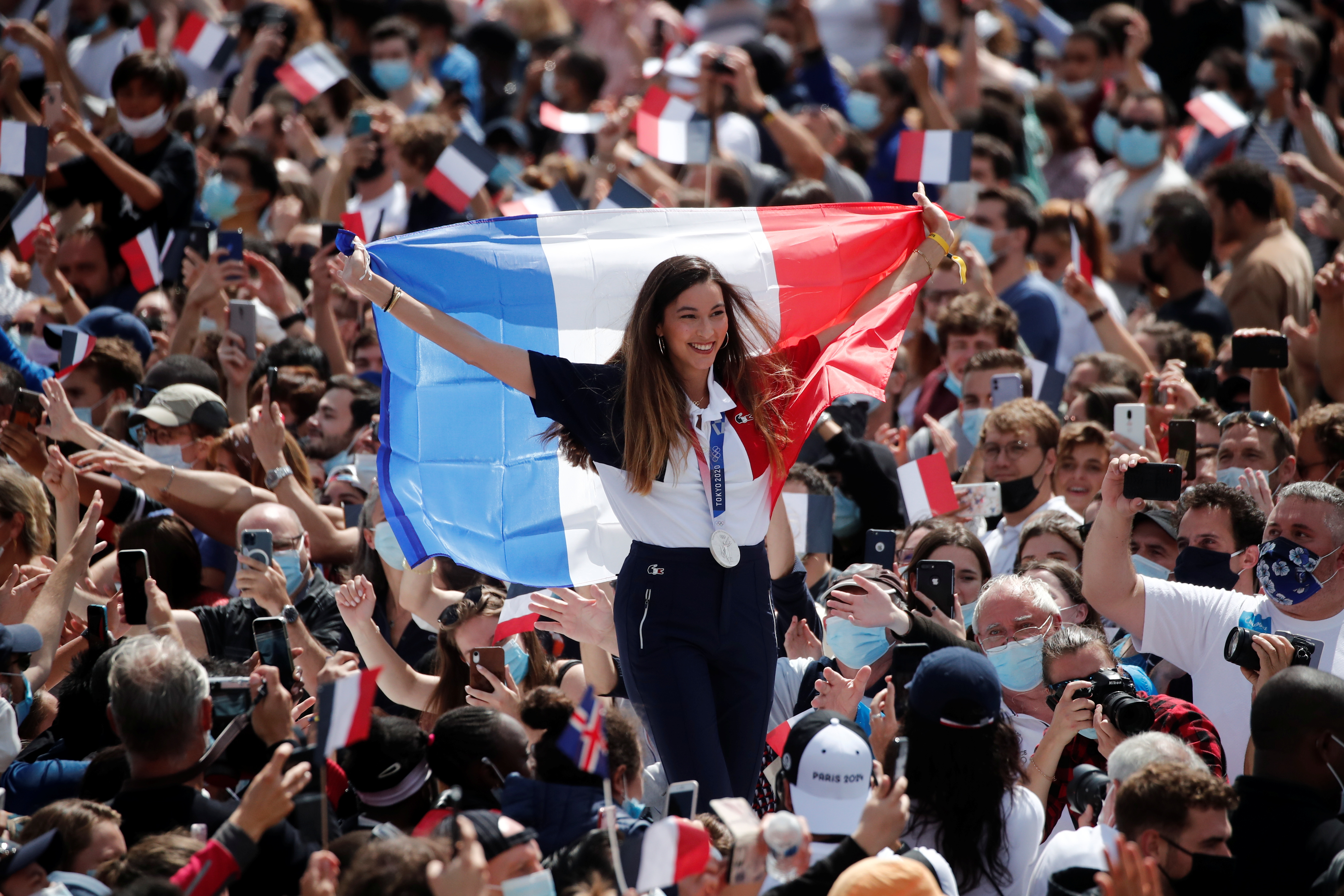 Silver medalist Charlotte Lembach of France holds a French flag as she arrives at Paris' Olympics fan zone to watch the closing ceremony of the Tokyo 2020 games at Trocadero Gardens in Paris, France, August 8, 2021. REUTERS/Benoit Tessier 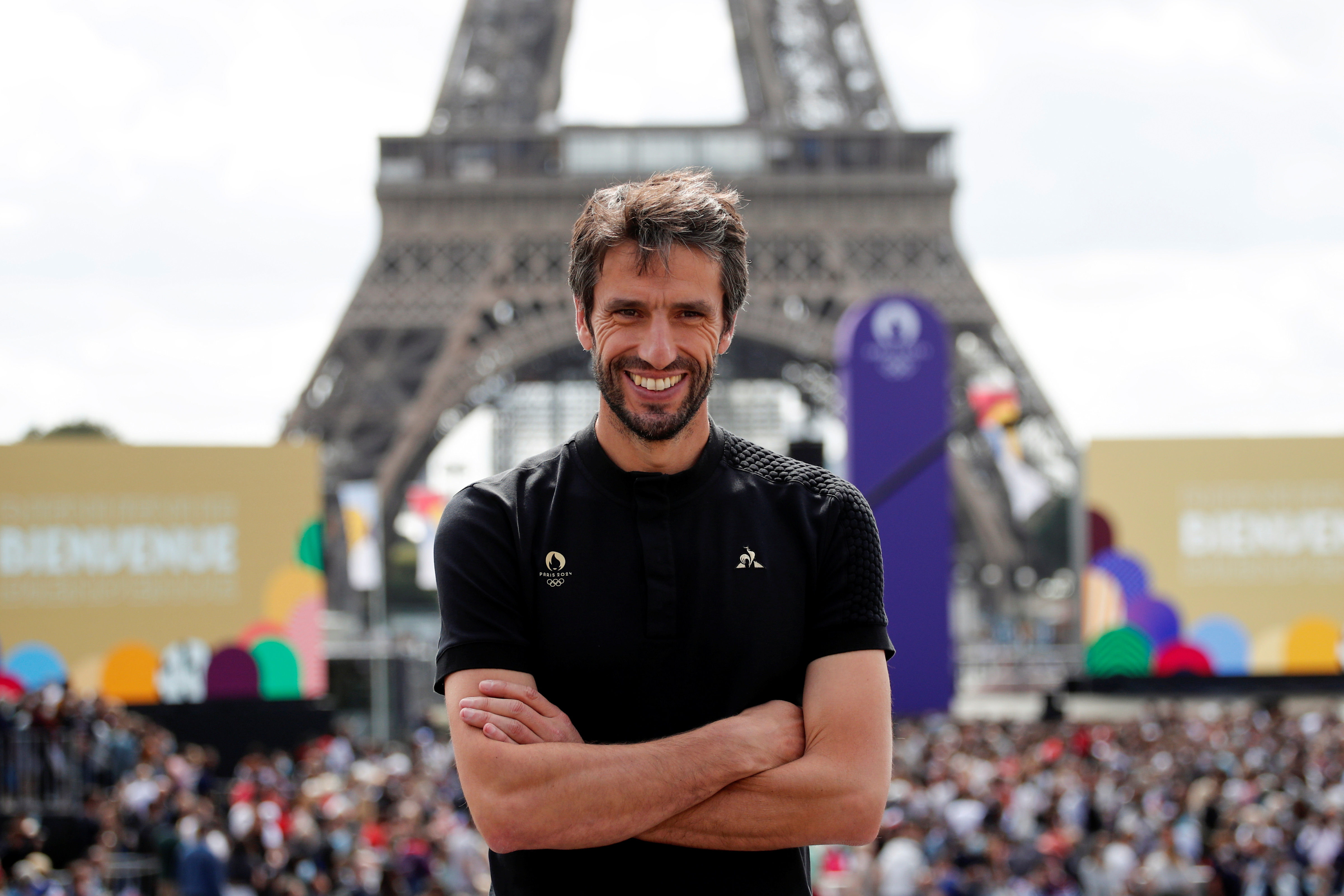 The event, held during the Closing Ceremony in Tokyo, featured a flyover by jets releasing blue, white and red smoke, symbolizing the colors of the French flag. 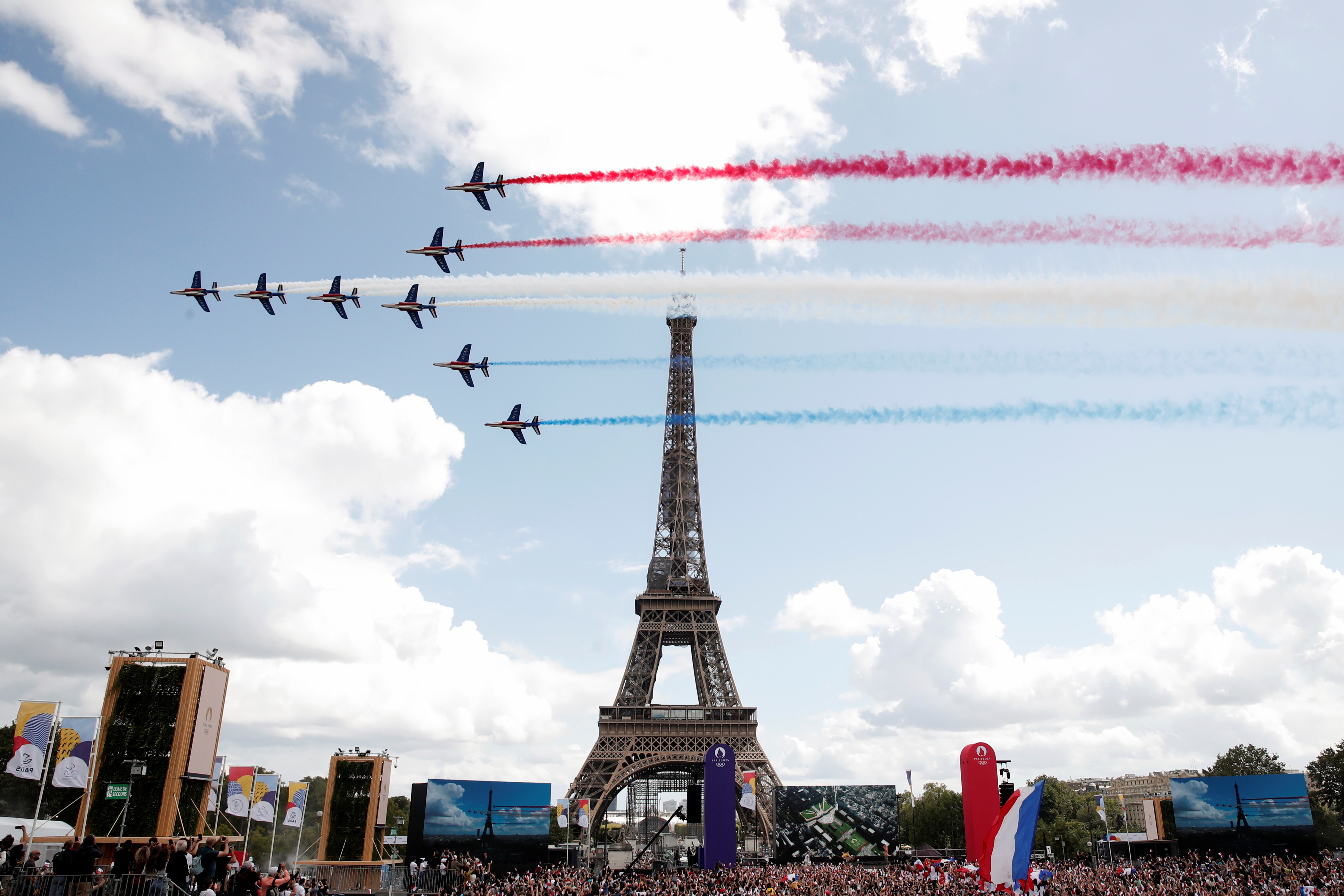 The French national anthem La Marseillaise greeted the handover of the Olympic Games, including a special saxophone solo from astronaut Thomas Pesquet on the International Space Station.

The plan to end with the unfurling of a massive Paris 2024 flag, the world’s biggest, at the top of the Eiffel Tower was scuttled by the windy weather. Instead, an image captured during the flag test on June 8 was shown. 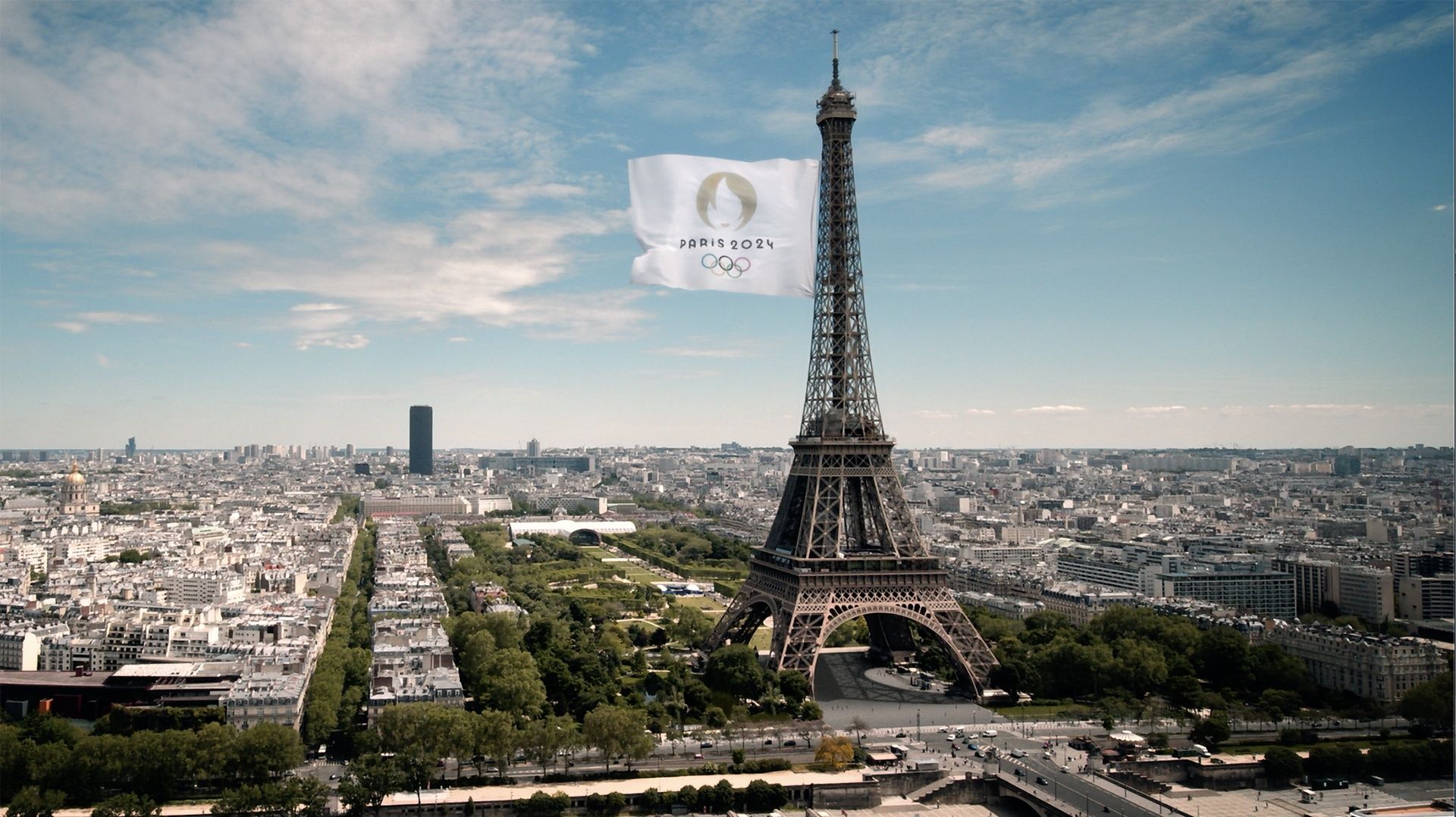 The crowd at the event in Paris was in stark contrast to the Closing Ceremony at an all but empty Olympic Stadium in Tokyo that closed the books on a Games without almost any spectators.

The Olympic flag handed over to Paris mayor Anne Hidalgo in Tokyo will arrive in France on August 9, accompanied by Hidalgo and the last group of French athletes to return from Tokyo.

Paris 2024 says a flag tour, starting with the Seine-Saint-Denis region, will be organized throughout France after the Paralympic Games in Tokyo end.

Japan douses the Olympic flame to end a remarkable Olympics as Tokyo passes Olympic baton to Paris for 2024
Tokyo 2020 was an Olympic miracle, and the challenge now is to get back to normality