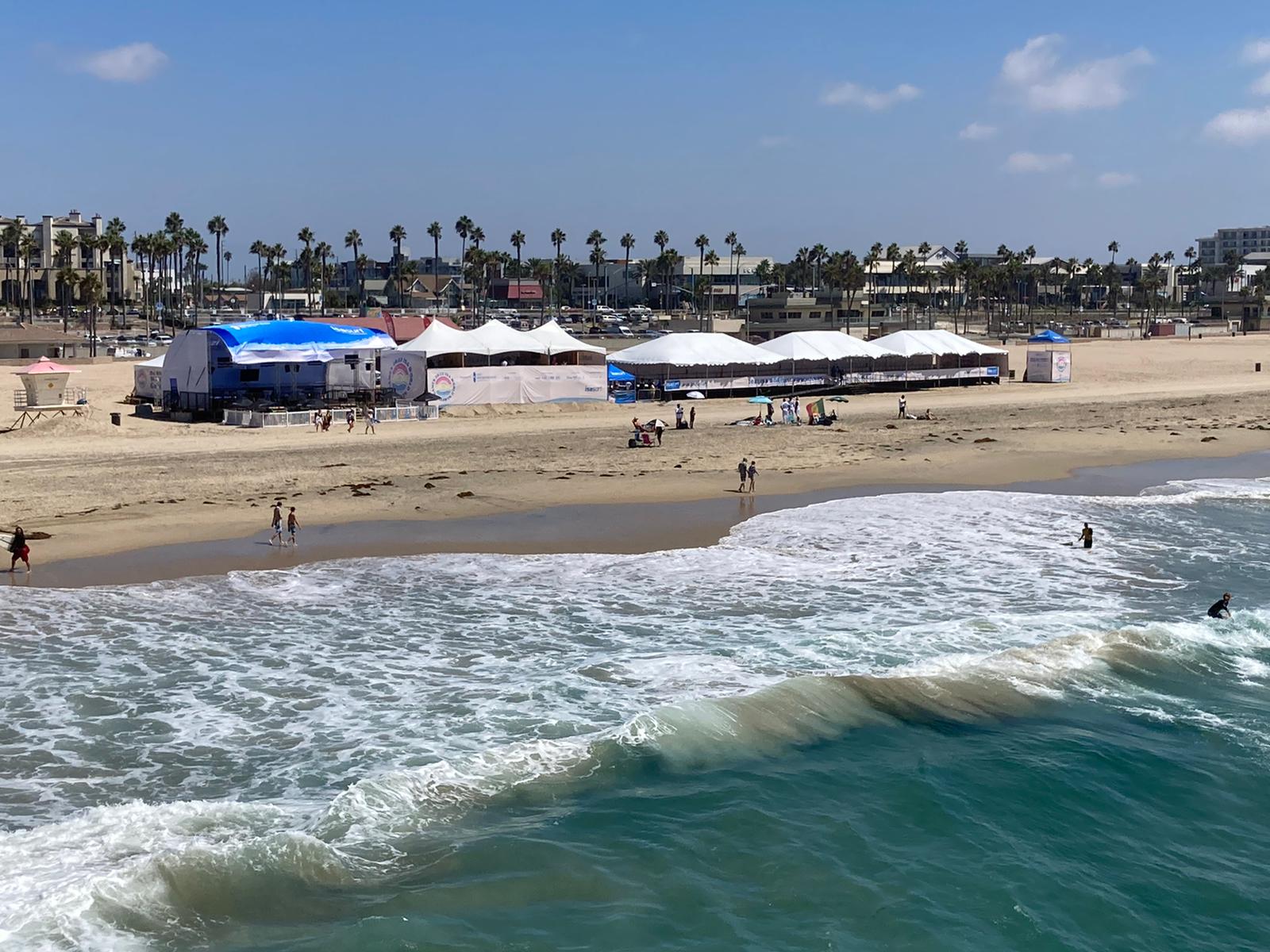 The iconic Southern California beach town and its’ world renowned waves are the optimal setting for the International Surfing Association’s (ISA) World Surfing Games, September 16-24. The 2022 edition of surfing’s world championships are serving as the opening qualifier for the sport’s second Olympic competition come Paris 2024.

Huntington Beach becomes home to the fourth edition of the marquee event, but first since 2006. The town’s sea, sand, surf, culture, century-old surfing history and California sunshine is unsurpassed when it comes to folklore and tales of the sport. A statue of Duke Kahanamoku, the father of surfing and a five-time Olympic swimming medalist stands prominently near the entrance to the Huntington Beach Pier.

The return of the World Surfing Games to Huntington Beach strikes an emotional chord for International Surfing Association president Fernando Aguerre. In 1996, it was here that the ISA president oversaw his first international event, igniting his vision to bring surfing to the Olympic Games. 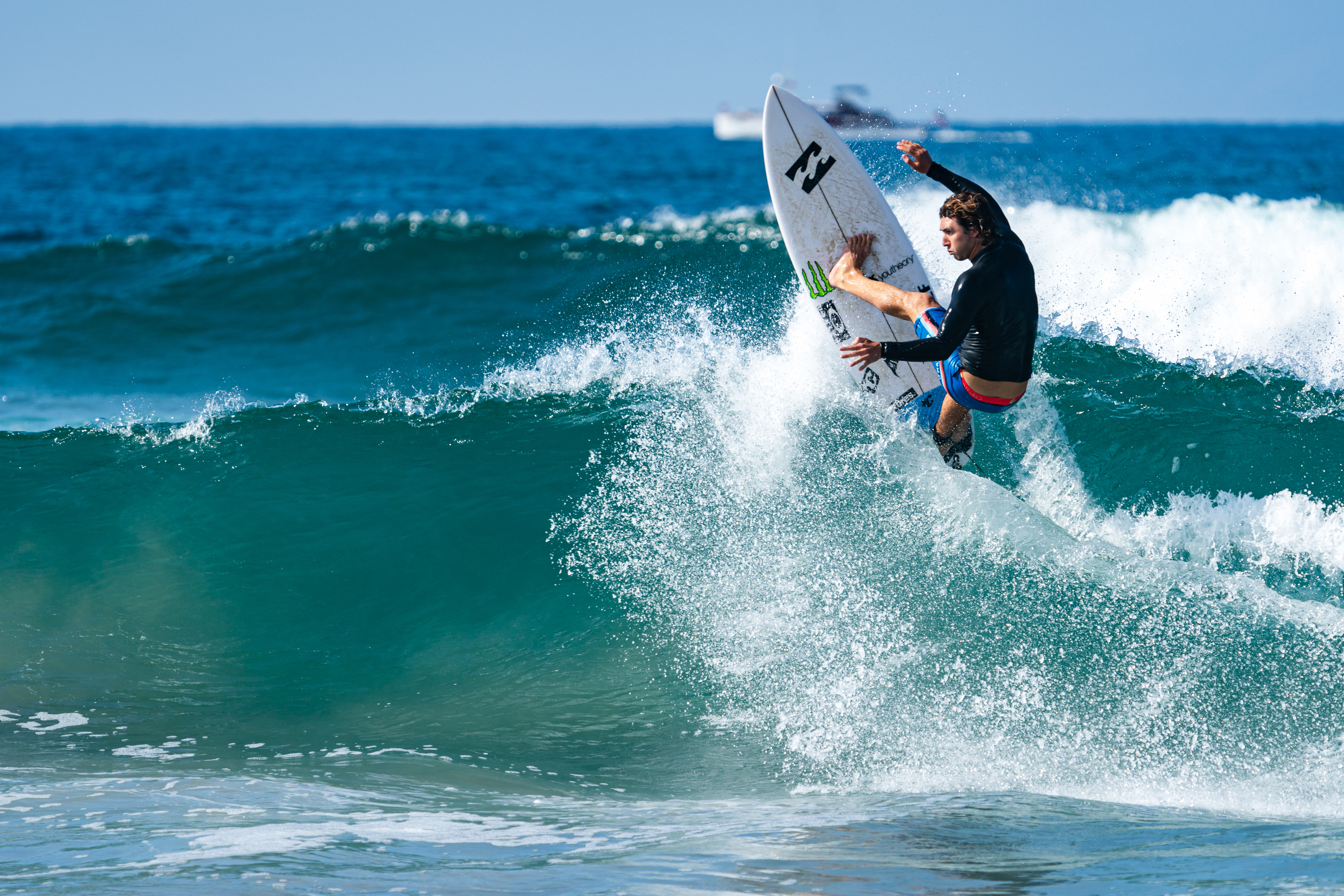 “It was just one of those special moments and that was the time that I informed the world that we had this vision, this dream for surfing to be in the Olympics,” Aguerre said, addressing media prior to Friday’s opening ceremony. “Of course, I immediately had people ask if I needed to call the doctor to see what was wrong with me.

“You start with a crazy idea, and then you make a plan, and then it becomes a reality and this is where we are today.

“We’ve been able to create this event here as an Olympic qualifier. It’s the second Olympic cycle in the history of surfing.” 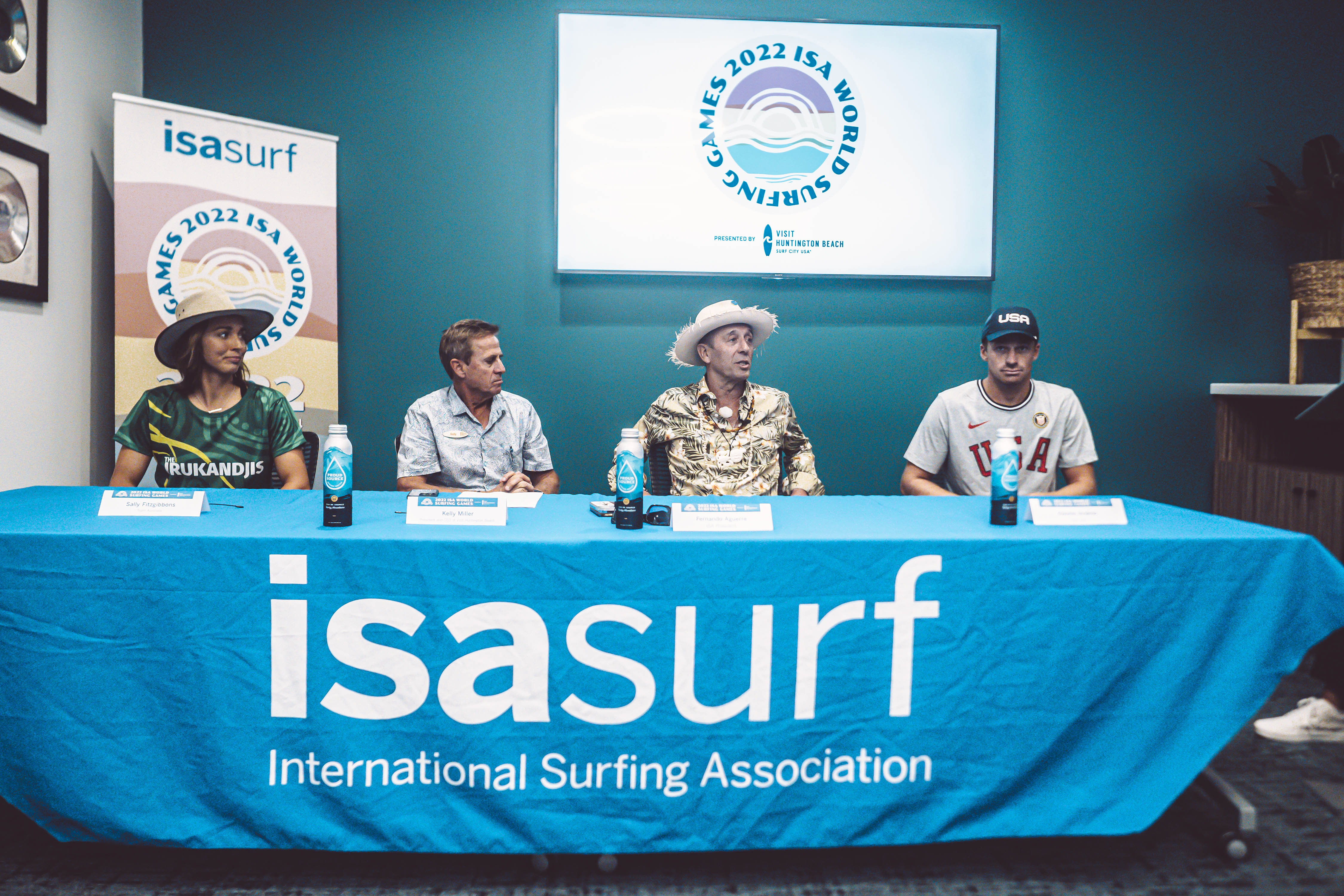 Enhancing the prestige and significance of the nine-day event, the victorious men’s and women’s National Teams will be allocated one Olympic slot each for their respective country. This qualification slot will be in addition to the maximum quota of 2 athletes per country for the 2024 Paris Olympic Games.

Fifty-one countries and nearly 250 athletes are competing at Huntington Beach. The Ukrainian surfing team received rousing applause at Friday’s festive, fun and colorful opening ceremony. And for the first time at the showcase surfing event, teams from Algeria, Lithuania and Saudi Arabia are present.

Ukraine’s Jaroslav Dombroski spoke about the magnitude of representing his war-torn country in southern California. 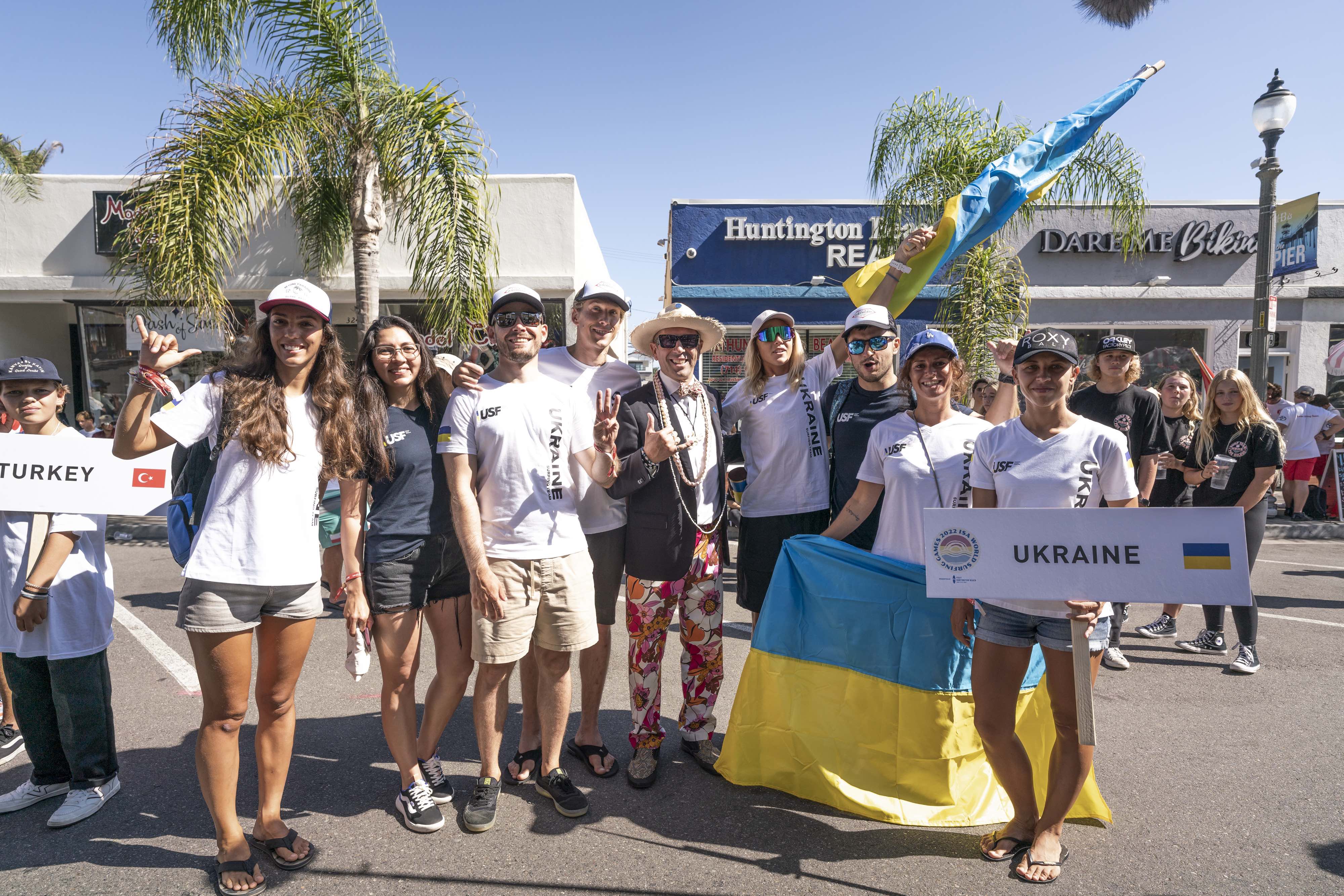 “Emotionally, we’re excited to get out on the water, show our best and enjoy our time surfing with the best surfers in the world,” Dombroski said. “We’re aiming for it and we’ll do our best,” he said, about potentially competing at the 2024 Olympics. 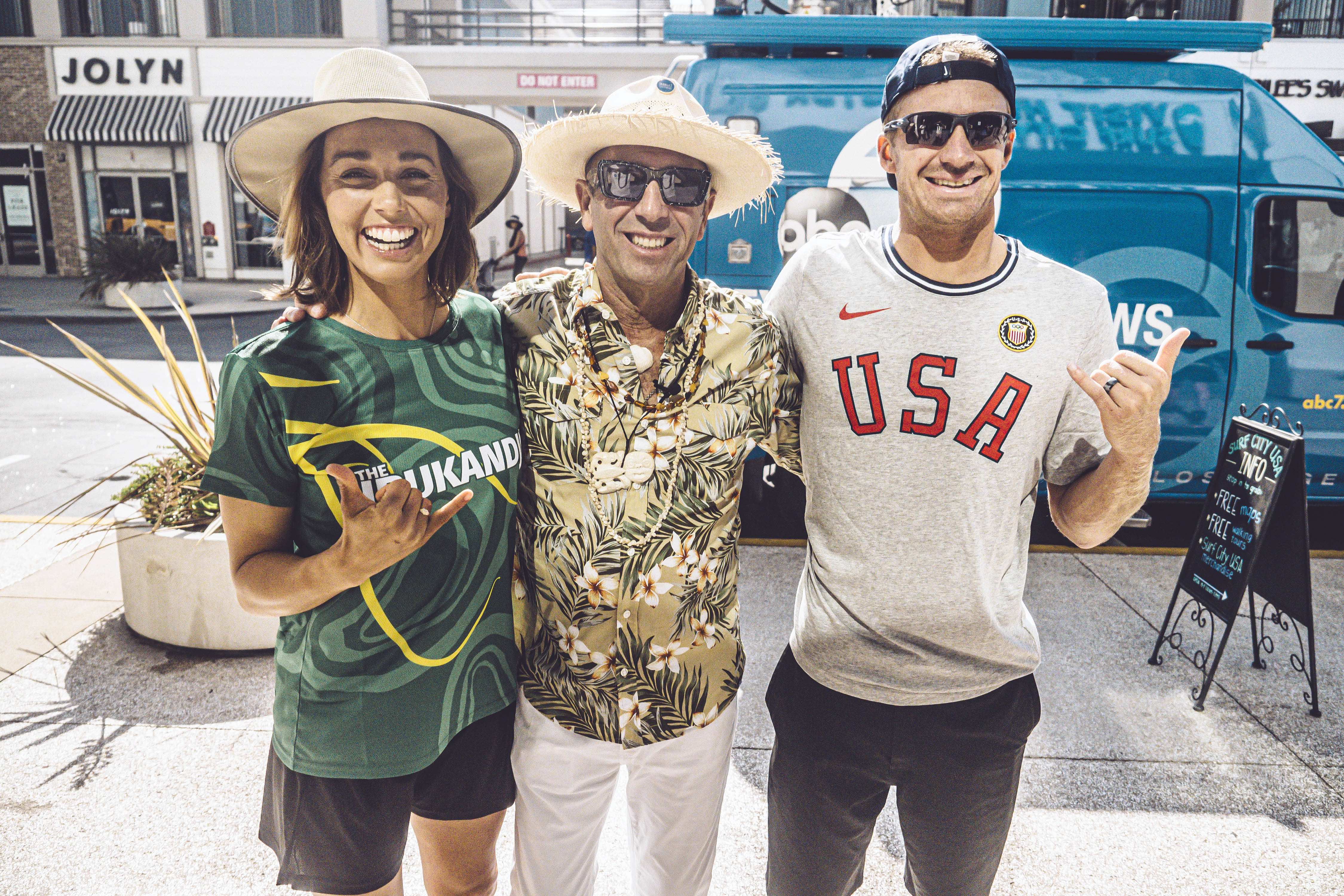 With competition kicking off on Saturday, U.S. Olympian Kolohe Andino touched upon the importance of pursuing a potential additional Olympic quota, especially considering the fierce internal competition expected amongst U.S. surfers for 2024.

“For those countries that have 3 or 4 guys or girls in the top ten in the world in surfing they deserve to be there, so for the Olympics to open up another spot for a country is amazing and I think this week people will be trying their very hardest to get that extra spot for the Olympics,” Andino tells Around the Rings. 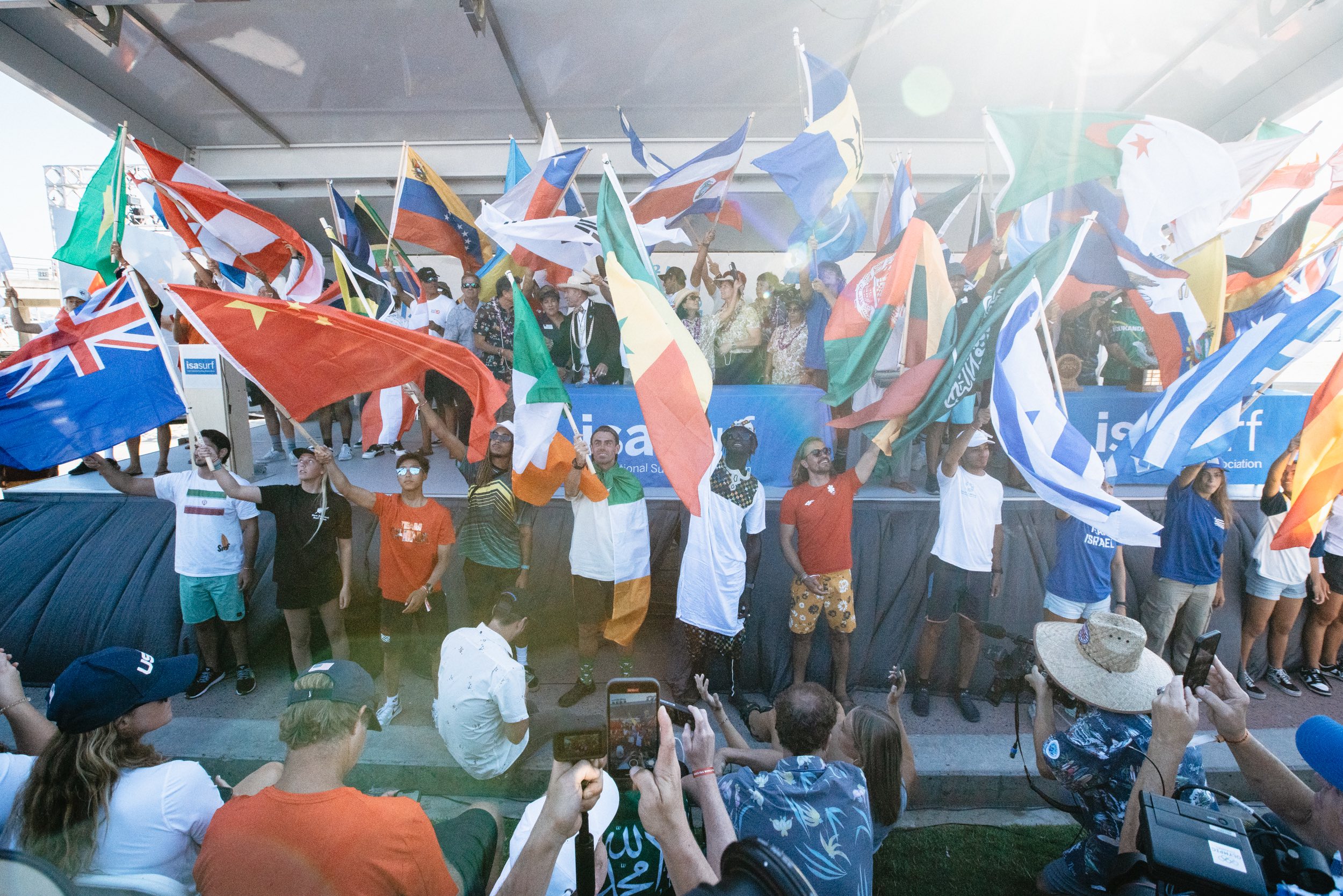 Aguerre continues to assert what he believes surfing is adding to the Olympic Games.

Aguerre informs the surfing and L.A. media that the IOC declared in January that surfing, skateboarding and sport climbing are replacing the traditional Olympic sports of boxing, weightlifting and modern pentathlon from the permanent Olympic program.

“In the words of IOC president Thomas Bach, it was recognition of all the values that these three sports brought to the Olympic movement and in particular the Olympic Games.

“This dream scenario is our reality,” Aguerre said.

In February, the International Olympic Committee approved surfing’s bid for the LA28 Summer Games, and the ISA announced surfing’s status as a permanent sport in the Olympic arsenal.

As the vote of confidence opens up more funding, more inclusion of various surfing disciplines, and more commitment to surfing’s Olympic future, surfers and and potential organizers, are also looking down the road to surfing at LA28. 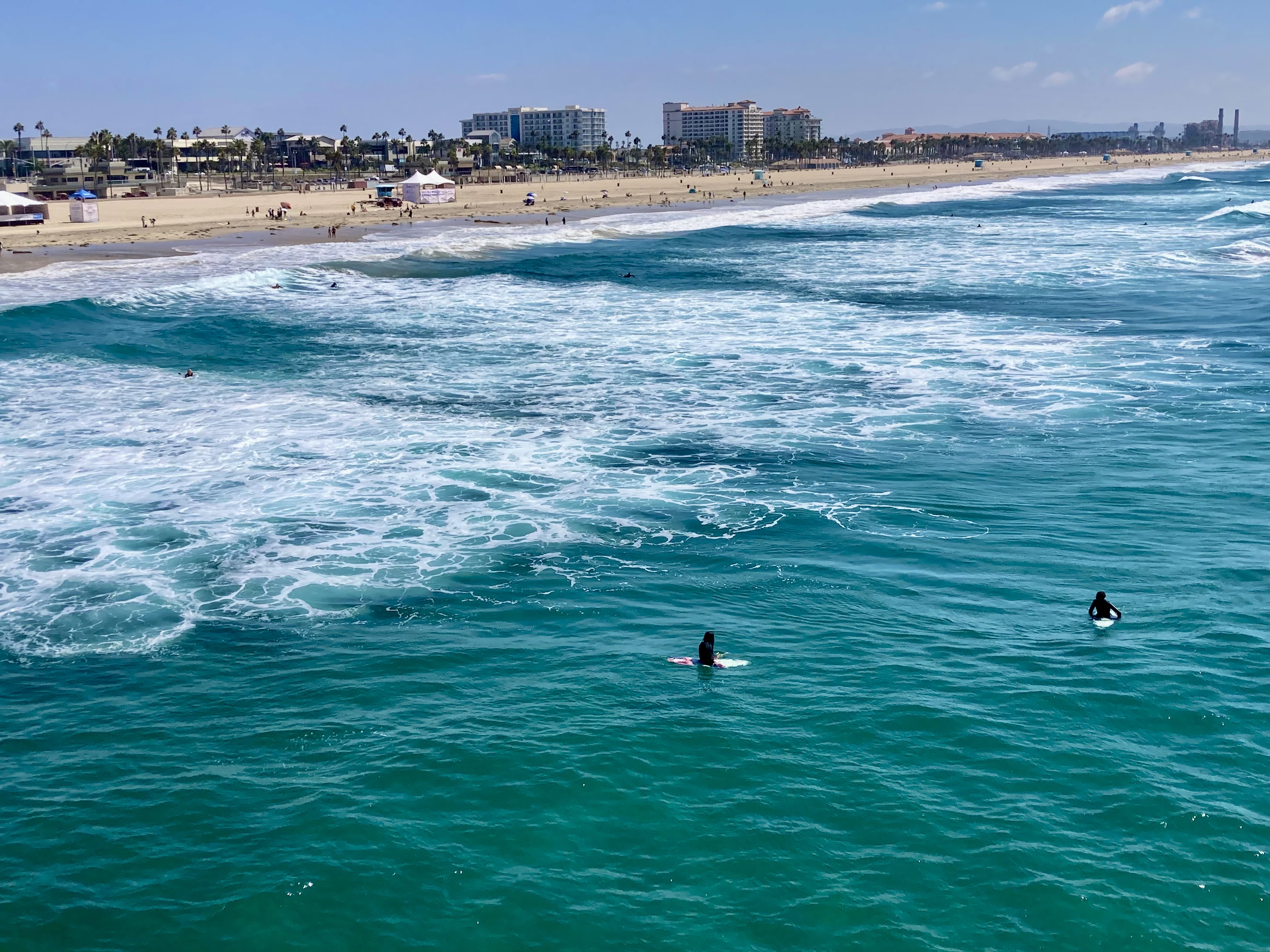 As emphatically expressed by local representatives and Huntington Beach politicians on Friday, the Orange County resort town would be thrilled to once again welcome the world’s premier surfers on the Olympic stage in LA28. However, the initial LA28 bid plan has Santa Monica, about an hour drive up the coast, as the proposed site for Olympic surfing for 2028.

“The Olympics makes surfing accessible to the whole world, not just people here in Huntington Beach or Argentina, but anywhere,” Delgleize said. “We can heal the world and bring more security to the world through surfing because you’ll go more places than we normally would go.

“For those of you old enough who remember ‘Wide World of Sports’ and seeing those waves and that gave people the confidence to do it and I know that we can do that here in Huntington Beach,” she said.