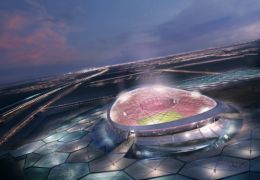 LUSAIL CITY, QATAR: In this handout illustration provided by Qatar 2022, the Qatar 2022 Bid Committee today unveiled detailed plans for the iconic Lusail Stadium. With a capacity in excess of 86,000 and surrounded by water, the stadium would host the World Cup Opening Match and Final if Qatar wins the rights to stage the 2022 FIFA World Cup. If Qatar is awarded the honour of staging the 2022 FIFA World Cup, construction of the Lusail Stadium will start in 2015 and be completed in 2019. It will retain its full capacity after 2022. (Illustration by Qatar 2022 via Getty Images)

(ATR) Qatar is spending more than $200 billion in construction projects ahead of the 2022 World Cup, according to a Deloitte report.

Of this spend, more than $140 billion will be pumped into modernizing the transport infrastructure over the next five years.

Qatar Tourism Authority plans to invest about $20 billion on tourism infrastructure as the number of tourist arrivals grows at a compound rate of 15.9 percent annually and is forecast to reach 3.7 million by 2022.

"Having been selected to host the FIFA World Cup in 2022 brought forth the opportunity for Qatar to position itself as a regional sporting hub. Qatar National Vision 2013 and programs such as Q2022 are focusing on leaving a legacy for Qatar in terms of football, infrastructure and economic development," Deloitte said.

Deloitte listed the top 20 projects under development in the gas-rich Gulf nation.

It’s topped by Lusail City. The $45 billion development, set to accommodate 400,000 residents, is scheduled to be completed by 2019.

The World Cup opener and final will be held at a new 86,000-seat stadium in Lusail City, which would be less than 20km from downtown Doha. According to early architectural designs, the vast continuous stand at one end has been likened to Liverpool’s iconic Kop.

Lusail Real Estate Development Co. is expected to award $3 billion worth of contracts over the next year for infrastructure and roads as part of developing the new city.

In terms of value, the spend on the 12 World Cup stadia is ranked 15th in the list.

Qatar 2022 organisers have said they will keep within the $4 billion budget earmarked to develop the host stadia.

Nine are being built from scratch and three existing venues renovated and expanded. All will be air-conditioned to combat the effects of the desert nation's fierce summer heat on players and fans.

Deloitte’s report is entitled ‘Insight into the Qatar construction market and opportunities for real estate developers’. The company, which provides audit, financial and consulting services, says it is evident that "immense opportunities exist for developers in the region and beyond, due in part to the infrastructure requirements of the FIFA World Cup 2022, and also as part of realizing Qatar’s national vision.

Jesdev Saggar, managing director, infrastructure & capital projects at Deloitte Corporate Finance, said: "With the world focused on Qatar’s every move, it is imperative that the local industry prepares itself for the plethora of international organizations that are ready to descend on Doha.

"Preparing for the competition is as important to everyone on the built environment, as it will be when the games start."

The earthquake, which had as its epicenter the Kahramanmaras region, left more than five thousand dead and rescue workers are working against the clock to save lives. “Our thoughts are with all those who have lost their lives and their families and friends,” said Thomas Bach, president of the IOC.

Boycott, a word that makes noise but doesn’t solve anything

A review of different claims that went through the history of sports shows that, even with the best intentions, the objective was almost never achieved.

Fire, Water and Earth: Marseille, an essential support for Paris 2024

The city where the Olympic Torch Relay tour will begin will also host all the sailing competitions and 10 football matches in the next Games. 800 athletes will set foot on its ground. It is marked by its ties to the mother nation of Olympism and had not hosted tests in Paris 1900 or in 1924.