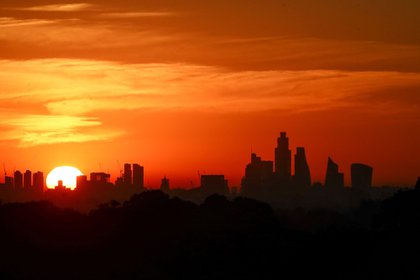 The sun rises over the skyline in this view from Richmond Park in London, U.K., on Friday, July 31, 2020. London's best offices are forecast to plunge in value by as much as 15% this year as the coronavirus hits rents and investors' appetite for real estate. Photographer: Simon Dawson/Bloomberg

The lawsuit was filed at a court in Hamburg, where Warburg is based, according to the people, who declined to be identified because they weren’t authorized to speak about the case. The two attorneys targeted are Hanno Berger and a man who has come to be known as ‘Benjamin Frey,’ a fake name, as his identity can’t be disclosed under German law.

Warburg on Thursday said that it filed suits against people who initiated, handled and profited from deals for which the lender has paid an additional 111 million euros ($134 million) to the tax authorities. The bank didn’t name any people or companies it sued or how much it was seeking, but said its tax bill for deals from 2007 to 2011 has grown to 155 million euros.

Berger, who lives in Switzerland, said he hasn’t been informed of any action. Suing him would be “pretty frivolous,” he said, because he never gave Warburg any advice on dividend-arbitrage transactions. He only introduced the bank to a business opportunity but it declined to hire him, he said.

Read more: Lawyer to the Rich Made His Own $56 Million Windfall With Cum-Ex

A lawyer for Frey declined to comment, as did Deutsche Bank.

TP ICAP declined to comment on the Warburg suit. The company referred to an earlier statement saying that the Cum-Ex trades happened years before it acquired the voice broking business of ICAP in 2016 from NEX Group Ltd and that it sued NEX over the potential liability for these deals.

The Hamburg court declined to confirm the filing, saying its policy is to only disclose suits once the defendants have been served with the complaints.

In Cum-Ex deals, investors rapidly traded shares to earn duplicate tax refunds on dividend payments. The practice ended in Germany in 2012 when the nation revised its rules, but Cum-Ex schemes may have cost taxpayers more than 10 billion euros.

Warburg in September lost an initial lawsuit filed against Deutsche Bank in a Frankfurt court over Cum-Ex. That tribunal said that it might be possible for Warburg to force payment from ICAP, which sold the shares in the deals at issue. Warburg has appealed the Frankfurt ruling.

The transactions at issue in the new legal action were the center of the first Cum-Ex trial in Germany. That ended in March with the conviction of two former U.K. investment bankers, and the court in Bonn seizing 176 million euros from Warburg.

Read more: A Private Bank Survived the Nazis But Cum-Ex May Break It

The trial centered on more than 30 deals in which its managers were involved, according to findings in that case.

The Bonn court is currently hearing the country’s second Cum-Ex criminal case in a trial against a former Warburg manager over allegations he participated in a Cum-Ex tax scheme that lost the country 325.9 million euros. Three more Warburg employees have been charged over the issue.