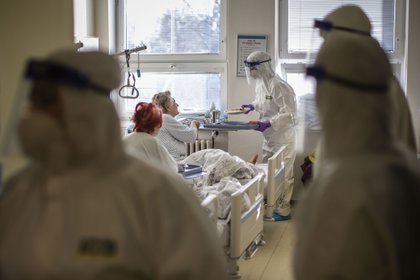 Healthcare workers serve lunch to Covid-19 at a hospital in Karvina, Czech Republic on Jan. 11.

(Bloomberg) -- The head of the World Health Organization criticized rich nations and drug companies for allowing younger, healthier adults to get vaccinated ahead of health workers and older people in poor countries. “The world is on the brink of a catastrophic moral failure,” Tedros Adhanom Ghebreyesus said.

The European Union’s executive arm will urge member states to set a target for vaccinating at least 70% of the bloc’s population by this summer, and German Chancellor Angela Merkel and state leaders appear likely to extend lockdown measures.

The U.K. will step up its mass vaccination program this week and is shutting its borders to anyone who hasn’t tested negative. Britain may begin to relax restrictions in the first half of March. Ireland reported its fewest new cases since Jan. 1, in a sign that one of the world’s worst outbreaks is beginning to slow. Portugal tightened travel restrictions.

California’s state epidemiologist recommended that distribution of more than 300,000 doses of Moderna Inc.’s vaccine be paused in the state after some people who received it had possible severe allergic reactions, the Associated Press reported.

Erica S. Pan said care providers should stop using doses from a single lot of the vaccine until state officials, the company and the U.S. Centers for Disease Control and Prevention and the Food and Drug Administration can complete an investigation. Doses from the lot were sent to 287 providers, according to Pan.

Fewer than 10 people, who all received their shots at the same site, needed medical attention over a 24-hour period. Moderna said in a statement to the AP that it is unaware of comparable adverse events at vaccination centers that may have used doses from the same lot.

The CDC has said that vaccines can produce side effects such as fever, chills or tiredness, but sever reactions are extremely rare.

Brazil accelerated its vaccination plans after the state of Sao Paulo publicly launched a drive to immunize residents, increasing pressure on President Jair Bolsonaro, a vaccine skeptic, to move faster.

The government began distributing 6 million doses of a shot from China’s Sinovac Biotech Ltd in partnership with Sao Paulo’s Butantan Institute to all of its 27 states, giving the green light for immunizations to begin right away, according to an official statement. Less than 24 hours before, Health Minister Eduardo Pazuello had said the nationwide campaign would kick off on Wednesday.

Pressure on the Brazilian president increased when Sao Paulo Governor Joao Doria organized a ceremony Sunday to administer the first dose minutes after it was approved for emergency use. Bolsonaro, who has repeatedly questioned the safety of the shots amid a pandemic that has killed more than 200,000 Brazilians, has recently seen his standing in the polls diminish.

Rebekah Jones, the outspoken former data scientist for Florida’s health department, was arrested Sunday on charges of accessing a state computer system and downloading a file without authorization, the New York Times reported.

Jones was fired in May from her job at Florida’s health department after she says she refused to manipulate data. She subsequently criticized Republican Governor Ron DeSantis’s pandemic response and built her own Florida Covid-19 dashboard to challenge official accounts.

Investigators found Jones’s computer was used to log into the health department’s emergency alert system in November, when unauthorized messages were sent to hundreds of employees urging them to speak out, the Times said. Jones had denied sending the messages.

The Portuguese government reintroduced travel restrictions between municipalities on weekends. Most stores that are still allowed to stay open will have to close by 8 p.m. on weekdays and 1 p.m. on weekends, Prime Minister Antonio Costa said at a press conference on Monday. The government also limited certain takeaway services.

Portugal on Friday had already tightened restrictions, including closing non-essential stores and requiring people to stay at home. On Saturday the government announced the biggest daily increase in confirmed virus cases since the start of the outbreak and earlier on Monday reported the highest number of deaths in a day.

Ireland reported its fewest new coronavirus cases since Jan. 1, in a sign that one of the world’s worst outbreaks is beginning to slow. The country reported 2,121 new cases -- the fourth day in a row cases have fallen -- with eight deaths. The positivity rate fell to 10.2% from 25% a fortnight ago. Still, case numbers are not close to being at an acceptable level, Chief Medical Officer Tony Holohan told reporters in Dublin. “We’ve made a lot of progress, but not nearly as much as we need to take,” he said.

New York Governor Andrew Cuomo said he asked Pfizer Inc. if the state could buy vaccines directly from the company because the U.S. government has failed to increase supply.

The Centers for Disease Control and Prevention expanded eligibility to more than 7 million New Yorkers but hasn’t increased -- and in some cases decreased -- the supply to states, Cuomo said Monday at a press conference. New York state will receive 250,000 doses this week, 50,000 fewer than last week. At that rate, it would take seven months to inoculate those eligible, he said.

No state has ever purchased vaccines directly from the producer, but “my job is to pursue every avenue,” the governor said.

The number of individuals who received their second dose was 2,565 as of Jan. 17, compared with 2,475 the day before. The second dose total is currently at 452,301, the government’s data website should.

In all, 8,868 patients are being treated in New York hospitals for the virus.

Italy registered 8,825 new virus cases, below the 10,000 threshold for the first time this year, dropping from 12,545 the day before. The country reported 377 deaths, the same number as Sunday.

Russia expects to start Covid-19 vaccinations for as much as 14% of the population in the first quarter after President Vladimir Putin last week told authorities to provide universal access to the inoculations.

Russia should have the production capacity to provide the first shot of one of its two registered vaccines to more than 20 million people this quarter, Deputy Prime Minister Tatyana Golikova said Monday in a televised meeting.

The European Union’s executive arm will urge member states to set a target for vaccinating at least 70% of the bloc’s population by this summer, according to a draft of the latest pandemic response recommendations due to be released Tuesday.

The European Commission will also vow to agree with member states by the end of this month on a protocol for vaccination certificates, according to the draft of the document seen by Bloomberg.

Czech Prime Minister Andrej Babis said there won’t be a substantial easing of restrictions before the number of people hospitalized with Covid-19 drops to 2,000 from 6,330 currently. The country is one of the hardest hit by the pandemic in Europe.

Hong Kong’s government-appointed vaccine advisory panel is seeking more data from the Norwegian and German governments on the reported deaths of elderly people after they received the Pfizer Inc.-BioNTech SE shot, the panel’s experts said at a press briefing on Monday.

The panel recommended the shot for use in Hong Kong but would ask the government to stop administering it “as soon as we receive information that tips the balance ratio of risks and benefits,” the panel convenor Wallace Lau said.

The U.K. may begin to relax restrictions in the first half of March, according to vaccines minister Nadhim Zahawi. The current lockdown is set to be reviewed in mid-February.

“There will be a point at which we can begin to gradually lift the non-pharmaceutical interventions,” Zahawi told Times Radio. Using the mid-February target for vaccinating the highest priority groups and adding 2-3 weeks for the shots to take effect, “you’re talking about the first, second week of March,” he said.

It’s wrong that younger, healthier adults in rich countries are vaccinated before health workers and old people in poorer countries, WHO Director-General Tedros Adhanom Ghebreyesus said at an executive board meeting Monday.

“The world is on the brink of a catastrophic moral failure,” he said. “Even as they speak the language of equitable access, some countries and companies continue to prioritize bilateral deals -- going around Covax, driving up prices and attempting to jump to the front of the queue.”

He also said manufacturers have prioritized regulatory approval in rich countries, where profits are highest, rather than submitting full dossiers to the WHO.

France will comfortably reach its target for 1 million Covid vaccinations by the end of January, Health Minister Olivier Veran said. Vaccine doses are being made available as they arrive, with appointments for the French to get the jab corresponding to available supplies, he said.

Iceland on Friday recorded no new cases of coronavirus for the first time since Sept. 10, local media quoted health officials as saying over the weekend. The island has had less than 6,000 confirmed cases of Covid-19 since the start of the pandemic and currently has no coronavirus patient in intensive care.